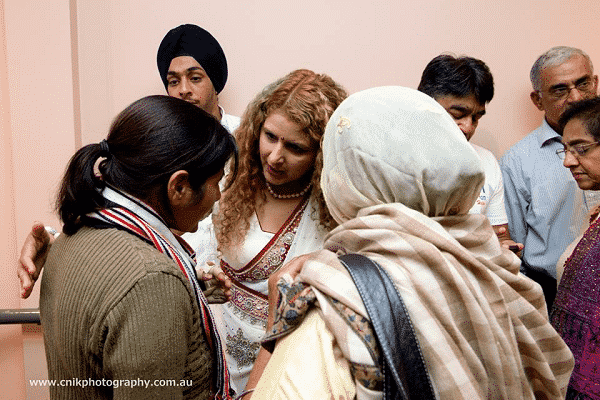 - Advertisement -
She did not utter a single word. She just stood there with her three-year-old daughter tugging at her sleeves, overwhelmed by the number of people around her. Her silence and presence spoke volumes and made a far more meaningful, if unfortunate, statement than the hours of discussion on the social malaise of family violence.

As Ramandeep Kaur from Bhatinda District stood with her head bowed, the room full of people took a collective gasp of shock and dismay. Her left hand had a finger brace for an injury. She hid a slash to her neck from when her husband had allegedly attempted to stab her with a kitchen knife.

“The incident occurred on the fourth of February this year. My husband, Sukhwinder Singh, left the house on the first of February after a fight, and I urged him to return and try to sort things out. He came and, without any warning, took a knife and tried to stab me,” she said.

“We live in a shared facility, and when I started screaming the others intervened and called the ambulance and police. He is currently on remand awaiting a hearing,” Ramandeep said, as she disclosed her side of the story.

According to Ramandeep she was married to Sukhwinder Singh for six years and had no trouble for the first year. However, in the past five years she has suffered multiple instances of violence when her husband would hit her. Their daughter also suffered the brunt of her father’s anger and witnessed his violent behavior.

Ramandeep Kaur came as a student to Melbourne and her husband was on a dependent spouse visa. He worked as a painter while Ramandeep worked as a part time beautician. This incident has resulted in a loss of income for Ramandeep, as she can no longer continue to work.

Raman’s distressing story was related at an event held recently by RaMon Helps Inc. at Tandoori Junction Indian Restaurant. The event was to celebrate International Women’s Day and introduce the audience to the issues that are dealt with by the team at RaMon Helps Inc. including cases like Ramandeep’s.

RaMon Helps Inc is a not-for-profit organisation, launched in December 2014, by Monica and Rakesh Raizada. Their main aim is to tackle various issues that are affecting the Indian community including family violence. A team of 40 like-minded volunteers supports them by forming teams to fulfill the vision of educating and empowering people – changing lives and strengthening communities.

According to Rakesh, his wife Monica, who has been helping several domestic violence victims, decided to dedicate her time and energy to help those that are less fortunate in society. They are currently in the process of relocating to the Western suburbs of Melbourne where the evil of family violence is on the rise.

“Our aim is to provide an umbrella solution to all personal, emotional, psychological, legal, financial needs of the domestic violent victims, and those less fortunate by getting them connected with professionals in the respective fields to provide assistance and guide them in right direction,” Rakesh Raizada said.

The RaMon Helps event was initiated as a celebration of International Women’s Day, however the subject of domestic violence soon took precedence over other topics as it was evident that people felt quite strongly about it. RaMon Helps invited different perspectives on the topic including legal, political, social and media where members of the community provided their input on various preventative measures that could assist in combatting this growing menace to society – particularly within the Indian community in Melbourne.

Preeti Daga and Dr Sonia Singh, as the coordinators of the event, outlined some global statistics and background on the issue, and the attendees were divided into separate groups and asked to brainstorm solutions. The intent was to compile the ideas and strategies that may assist people in moving towards the resolution and prevention phase.

The main themes that arose from the session were the need to educate young children in schools and other environments on family violence and the need for respectful relationships as well as finding ways to reduce gender inequality by empowering women and changing societal norms and attitudes towards women. Focus is imperative on raising awareness of the issue within the community including providing information on ethno specific resources available to assist victims and their families.

During the event RaMon Helps also took the opportunity to acknowledge the support and contribution of various individuals to the RaMon team, particularly, the selfless volunteers who are all geared up to take action to address the issue of family violence.

A follow up with Ramandeep suggested she is currently boarding with another person from her village who is assisting Ramandeep and her daughter to manage their daily lives. Ramadeep has been put in contact with relevant agencies that are assisting her and RaMon Helps Inc. claims to be currently trying to expedite and facilitate her recovery from the ordeal.