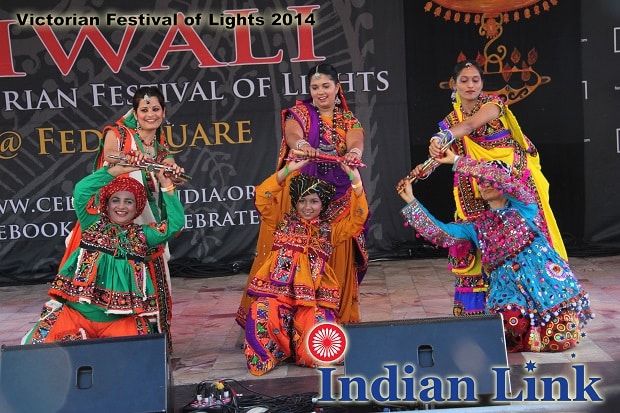 Over the years Diwali has emerged as the dominant Indian festival to be celebrated around the world. This year, over 35,000 people converged in the UK city of Leicester to celebrate the major Indian festival. In the US, the Obamas extended their warm wishes and lit diyas to celebrate Diwali in the White House, while closer to home the sails of Sydney’s iconic Opera House were illuminated to celebrate the festival of lights.

In Melbourne one of the largest events was held at Federation Square where Celebrate India brought to life the traditions, food and celebration rituals of Diwali. With a lavish assortment of music, dance and activities, the event upped the grand scale of entertainment for the audience to enjoy. The rush and jostle was all part of the experience as the event drew a large crowd. Thousands of revellers visited the Fed Square cultural precinct throughout the day to be part of the extravaganza.

With creativity and innovation,the Celebrate India team has taken this festival from strength to strength since its launch in 2006.

Each year the organisers add another interesting element to their list of activities.

During the main event the crowd surged through the Square as many savoured Indian delicacies from the array of food stalls, whilst others shopped for traditional Indian crafts, fashion and jewellery. Festival staples like henna applications and face painting vied for attention with free photo opportunities with the 2015 ICC World Cup.

The biggest crowd puller was the ongoing entertainment on the main stage as myriad dance forms from varied regions of India – and the ever-popular Bollywood – created a fine synthesis of movement, expression and rhythm. Weaving together the diverse threads of Indian culture, artistes depicted both classical and contemporary variations and combinations of art, dance and music.

Exotic flavours from across the globe were also to be found through representation from Fiji, Mauritius, Sri Lanka, Latin America and China. A laughter yoga session added joie de vivre that made you want to turn to their neighbor and smile. A broad range of activities kept the audience engaged and there was something for people of all ages.

Extensive contemplation and planning, extending over quite a few months, ensured that the event ran smoothly. A dedicated team of 35 volunteers coordinated countless details and dealt with all aspects of planning, promotion and execution under the able guidance of Arun and Jaya Sharma.

This year, Melbourne’s major public transport provider Metro promoted the festival in several languages. Through their regular announcements they informed commuters about the Festival and the significance of Diwali prior to the event.

People at Melbourne’s Tullamarine Airport also witnessed the magic of Diwali as the Celebrate India team decked out the terminal in festive décor, distributed traditional sweets to passengers and presented Bollywood dances for entertainment. Travel weary passengers were taken by surprise with this display of spectacular colours, fun and vivacity.

This year also saw the addition of the Celebrate India Essay Competition, a cross-cultural initiative that encouraged primary school students in Victoria to participate in an essay writing competition with an aim to increase awareness of India and its culture.

Leading up to the main Federation Square event popular Bollywood movies were screened in collaboration with Mind Blowing Films. The Diwali message was constantly encountered in the form of colourful banners at Finders Street station, as well as through the sound of Indian music being played in beautifully lit carriages as they travelled the streets of Melbourne.

An impressive list of dignitaries including Premier of Victoria Denis Napthine, Opposition leader Dan Andrews, Deputy Mayor of the City of Melbourne Susan Riley, and Consul-General of India in Melbourne Manika Jain were in attendance. Speaking at the occasion, Arun Sharma, Festival Director, expressed his dream that Diwali would be declared as a public holiday in Victoria someday soon.

Putting the big bang into the Diwali at Federation Square festival, the day’s events culminated in a spectacular fireworks display. The explosive pyrotechnics electrified the night sky with a riot of colours as people observed the display from whatever vantage point they could find.

With the backdrop of the ‘most livable city in the world’ the sparks shone on people’s upturned faces and it was a befitting end to a joyful day.

Thanks to Celebrate India’s creative choreography, Diwali was celebrated as authentically and enthusiastically as it is back home.

With thanks to AP Guruswamy for some photos