A rendezvous at the Dussehra fair 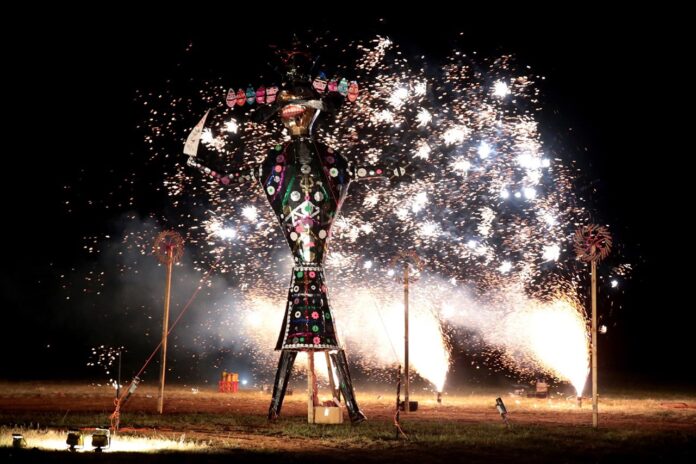 At the recent Dussehra Festival, presented by Rendezvous Events at Laurie Emmins Reserve in Melbourne’s Laverton, more than 4,000 people experienced a warm and sunny afternoon of passion, energy and enthusiasm.

With a variety of food stalls and market stalls, selling everything from delicious Indian sweets and delicacies, to handicrafts, jewellery and Indian garments, there was something for everyone.

Owners of Rendezvous Events, and organisers of the Festival, Dinesh and Priya Ramani, worked hard to make the first-time Dussehra Festival at Laverton a success.

The performance programme included Bollywood dancers, a magic show, a Punjabi Bhangra group and DJs pumping tunes throughout the evening. There was also a children’s programme including face painting and rides.

The highlight was a traditional hour-long Ramayana show by Shri Raghavan Nair’s Indian Dance Centre. As co-organiser Dinesh Ramani said, “It was an absolute audience favourite. It reminded all of us older generations of our childhood memories of celebrations in India.”

The event, which ran from lunchtime until 9pm, concluded with a distinctive Ravan Dahan and incredible fireworks. They burned the giant Ravan effigy which was brought over especially for the occasion of the Festival from India. Young families and the older members of the community all delighted in the spectacle! Dussehra is the culmination of the Hindu Navratri festival. It celebrates Lord Rama’s victory over the demon king Ravana. The traditional burning of the effigy of the ten-headed baddie represents the purging of all negativity within our own selves. The Hindus gathered at Laverton that night all rejoiced as the evil Ravana went up in flames. For them all the evil in the world had been symbolically vanquished, and they were ready to start the new year with a clean slate.

Dignitaries at the event included the Mayor of Wyndham City Council, Bob Fairclough, along with the Shadow Victorian Minister for Transport, Jill Hennessy. They spoke of their support for the local Victorian Indian community and their delight in participating in the multicultural event. Local councillor and Indian community leader Intaj Khan was also in attendance and was seen having a great time.

Dinesh Ramani thanked his team of friends and volunteers as well as the advertisers and stallholders for making the first Dussehra Festival at Laverton a roaring hit. “It was a great day, with a fabulous, fun atmosphere,” Dinesh said.