A night in Calcutta 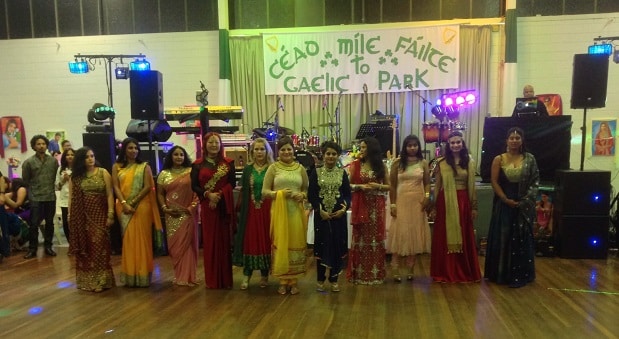 It was a Bollywood theme for the dinner and dance event held by Australian Anglo Indian Melbourne Rangers Club recently. Aptly named ‘A night in Calcutta‘ the evening took guests down memory lane whilst showcasing Bollywood and India in all its finery.

The colours and scheme had a touch of royalty as guests arrived in the finest Indian attire some having invested in designer outfits for the special evening. The Gaelic Park Hall in Keysborough looked splendid with all the colours and sparkle used to give the place a Bollywood touch.

Captain Henry Robbins praised the hardworking team of AAI Melbourne Rangers for organising the fun filled event. Captain Henry and his wife won the best-dressed prize for their Maharajah and Maharani getup. Mrs. Robbins looked splendid in her outfit that was designed by Mumbai based designers Suhmita Sen and Felix Bendish.

Captain Henry entertained everyone with his characteristic jovial nature. “I am not so good on the dance floor so I decided to dress up well instead “ he said when he was handed the coveted prize.

Palates were romanced with Calcutta style Kathi Rolls and Calcutta Chicken Biryani along with other Indian delicacies. “The food was finger licking good” commented one of the guests.

A Bollywood-themed evening is incomplete without some dancing and the guests boogied the night away to old and new Hindi songs played by a live band and DJ.The talented musicians from the Next Generation Band instantly connected with the audience with their vibrant energy on stage and a great selection of songs. With plenty of prizes to be won, competitions to keep the evening interactive and a fantastic mix of good music the event was a great success.