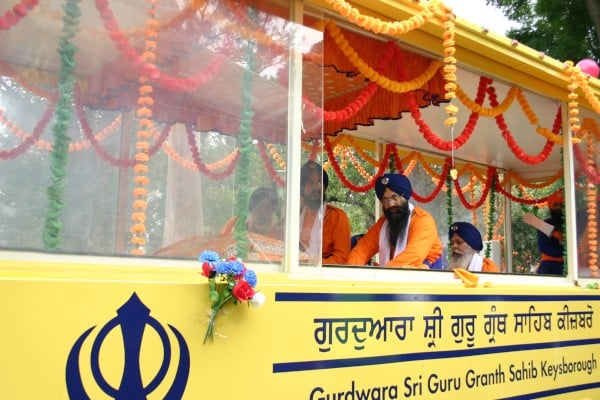 Melbourne’s Sikh community, in all its colourful glory, took part in a celebratory procession to mark the spring festival of Vaisakhi recently. Hundreds of Sikhs, of all ages, flooded the inner city streets reciting religious slogans and passages from the holy (Sri Guru Granth Sahib) scriptures.
The massive procession commenced on foot from the Victorian Parliament House and travelled, peacefully, towards Flagstaff gardens. Hundreds of volunteers manoeuvred the crowds to ensure that they remained on the main road and within the confines of a rope stretched along the sides.
The special event, known as nagar kirtan was organised by the Victorian Sikh Gurudwaras Council (VSGC). The procession was led by saffron robed Panj pyare (the five beloved) carrying the nishan sahib (Sikh flag) followed by a palki (palanquin) of the holy Granth inside an open vehicle.
Vaisakhi is usually celebrated on April 13 or 14 every year and marks the Sikh New Year and the harvest season. It also commemorates the formation of Khalsa panth of warriors under Guru Gobind Singh, the tenth Sikh Guru, in 1699.
Sharing the values of Sikhism – equality, selflessness and seva – there were major arrangements made at Flagstaff gardens, to offer free langar (food) to the community and the participants. Water bottles, fruit, tea and traditional food items were generously distributed to everyone. The event was open to all communities.
As the procession headed in full force towards its culmination point, spectators witnessed the vibrant colours of traditional Punjabi outfits and enjoyed the soulful music sung by the participants. Cameras were whisked out by everyone to capture the unique visual, especially by the construction workers who were in the process of completing road works in the city.
Local Sikh organisations, community members and Punjabi language school kids were among those that proudly marched down the streets. According to Gurudwara officials, the event attracted several thousand people this year and they intend to make this an annual celebration in the future.
Premier Daniel Andrews, who supported and encouraged the celebrations, communicated his wishes to the community through a video message released earlier on social media.
https://www.facebook.com/DanielAndrewsMP/videos/308779359804758/?v=308779359804758
Tight security was maintained throughout the walk by a strong contingent from the Victorian Police.
According to Neil Angus, Shadow Minister for Citizenship and Multicultural Affairs, the crowd was even better than he expected. He expressed his admiration for the generosity of the community that was clearly visible as volunteers distributed copious amounts of food and drinks to everyone. Other Political Party members present also expressed their delight at the vibrant colours and the strong family and community feel of the event.
According to Antarpreet Singh Arneja from the Blackburn Gurudwara Committee, the intent behind this unique event was not just to mark a traditional Sikh festival but also to promote universal brotherhood and multiculturalism.