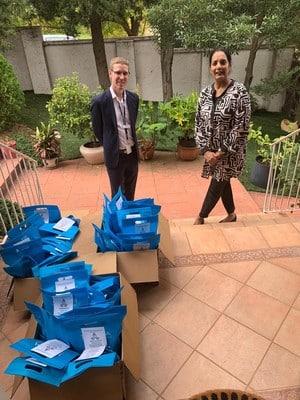 What started as a joke at Simba Global’s leadership meeting has ended up raising hundreds of dollars in donations for Disha – The Direction to Hope, a not-for-profit organisation.

In the last 13 years, Disha has successfully raised nearly half a million dollars in donations to multiple major hospitals in Melbourne. Now, one man’s haircut during the pandemic has helped them to assist Victoria’s front line workers.

Four weeks ago, Hiten Somaia (General Manager, Technical at Simba Global) was getting sick of his long hair. With daughters who were maintaining social distance, no mirror to help him, and a gentle reminder to self-isolate in a hotel if he wanted to visit a hairdresser, Somaia decided to cut his hair himself.

When he mentioned his plan to colleagues at Simba Global, they thought he was joking. They even said they’d pay him to actually go through with it. To their shock and his amusement, he did! Unbeknownst to the organisation, Somaia had nominated Disha – The Direction to Hope as his charity of choice for the endeavour.

When the Melbourne-based organisation heard of this, they wanted to think out of the box beyond cash donations to hospitals. Just like the endeavour, they wanted to find a unique way to contribute. And so, Disha decided to pack hundreds of bags of “comfort food” for the doctors, nurses, clinicians, pathologists, and police officers working tirelessly in this hour of need.

Every cent raised by Hiten Somaia and Simba Global, along with generous donations from the community, is being used to prepare bags of comfort food for Victorian front liners. So far, they’ve packed over 845 bags with five snack items each for the soldiers fighting the virus.

The not-for-profit organisation also acknowledged the police’s efforts in these trying times and has donated comfort snack packs to Boroondara Police Station in Kew and Heidelberg Police Station.

In the road ahead, the perseverance and tenacity of front liners is critical for all of us, proving the direction to hope.

READ ALSO: Charity in the blood