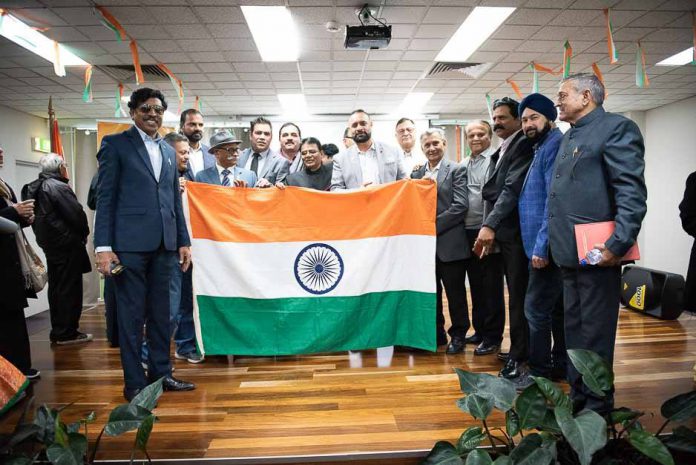 They may have been thousands of kilometres away from Indian shores, but that did not stop the Indian diaspora from celebrating the 73rd Indian Independence Day in Melbourne with the same fervour as 1.3 billion people in India.
The event at the Consulate General of India office began with the flag-hoisting ceremony in the morning, followed by an Independence Day reception in the evening hosted by Consul General Raj Kumar.
The reception was attended by Pauline Richards MP, Member for Cranbourne and Victoria’s Premier’s representative, and members of the Indian diaspora, including the newly crowned Miss Universe Australia Priya Serrao.
In his address, the Consul General Raj Kumar, for whom this was the first Independence Day here in Melbourne, spoke of the unique ties Victoria has been able to build with India.
He said, “Victoria has attracted many communities, including Indians. Now, Victoria has the largest number of Indian diaspora compared to any other State. About 50,000 students study here. The Indian diaspora had been contributing to the economy and culture of this place, whether in government, education, research or business.”
Referring to exchange of visits at the highest level which have built significant momentum in India’s relationship with Victoria, Kumar said there have been fruitful engagements taking place between universities such as Melbourne, RMIT, Swinburne and La-Trobe with various institutes and business schools in India.
In the days following, the Indian community was heartened by the news of the University of Melbourne’s five-year strategy for India, launched by the university’s top brass in India. Only days before of course, La Trobe University bestowed a special honour on actor Shah Rukh Khan, news of which went viral not only in India but amongst the diaspora.
Besides education, the CG also pointed out the other bilateral areas that are calling out for greater engagement, such as digital technologies, agro businesses such as food processing, waste management and water management.
He also noted, “Building relationship between two countries is incumbent not only on the respective governments but on long lasting bonds which are built by the people of two countries and interactions between their societies.”
In her address, Pauline Richards MP, Member for Cranbourne and Victoria’s Premier’s representative, said her government is committed to Victoria’s vibrant, multicultural and multi-faith society, including the Indian community.
“We are a multicultural state but we are also in a vibrant city, Victoria is unique – we come from over 200 countries, speak more than 250 different languages and dialects and follow more than 130 faiths. Like India, Victoria’s diversity is our greatest asset and strength. The Indian community is the largest in community in Australia. Events like the India Independence help us to celebrate us Indian heritage,” said Richards.
Commenting on India’s Independence Day, entrepreneur, Tanvi Mor spoke for many of her compatriots present when she said, “Celebrating Indian Independence Day in Australia clearly gives me a platform to stand next to fellow Indians, connect back to my roots and pay respect to Indian freedom fighters.”
She added, “As an individual, I not only get an opportunity to share the pride of my motherland, but also share my identity with Australians and the accountability I hold on this land while representing my country.”
The event included a mesmerising performance by Kalakruthi School of Indian Classical Music, founded in Victoria in 1994, by internationally acclaimed Carnatic Guru Shobha Sekhar.