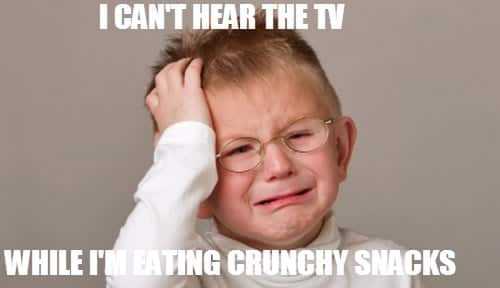 Reading Time: 3 minutesA man raised by wolves in a forest says he misses his old life. Living as a wolf cub in a Spanish wilderness was much less stressful than modern life, Marcos Rodríguez Pantoja told the BBC last year. Journalists expressed surprise at his declaration then, but I totally get his point. Last week, my book ran out of batteries! A tech-driven modern life isn’t easy, you all.
I know Socrates is looking down at me from heaven and laughing, waving his “always on” scroll. Meanwhile, at home, my child is outraged. Why? “My snacks are so crunchy I can’t hear the TV,” she complains, furious.

This is literally the worst thing that has ever happened to this child. I mean, how is she going to cope with real life, during which massively tragic things happen – like, you know, when they forget to put mayo in your sandwich, a devastating incident that totally spoiled this columnist’s day yesterday?

I told her that in my day, the only TV was a window facing a brick wall and the only snacks our fingers. She said brick walls are better than what is on TV these days… she’s probably right.
Back at work, I was moaning about my dead e-book when a colleague told me about another tech problem. The trend spreading across Asia is to have a robot vacuum cleaner, a wheeled disc that quietly vacuums your floors in the middle of the night.

Unfortunately no one told these machines that a) Koreans and Japanese people often sleep on thin mattresses on the floor; and b) sucking up hair on the floor is not a good thing to do if it is still attached to a human’s head! On one recent occasion, firefighters had to be called to remove a ravenous disc vacuum cleaner from its Korean owner’s head.
East Asian owners are junking their cleaning robots for superior technology: broomsticks.
Police officers in the Indian state of Odisha demonstrated how they use pigeons to get messages across a vast portion of the state in just 20 minutes. During floods and power cuts the police pigeon service is the only functioning communications system.
So, basically, if their conversations are anything like mine, you send a bird across the state with your message, such as “LOL” and 40 minutes later, you get the bird back with a message saying “LMAO” (Laughing My Ass Off). Oh well, at least no one can complain about information overload.
A colleague showed me an angry text that had been sent by a young person from an aircraft recently. “There’s so much leg room in business class that I can barely reach the touch screen TV,” she complained. Shock horror, such suffering!
The odd thing is her inability to realise how the rest of us, sitting in economy class seats with our noses mere millimetres away from the seat in front, will take her message. Where’s her brain?

Uh-oh. I would canvass readers, contributors and colleagues for more examples to fill this column with, but the main functional section of my own brain – which is housed in a smartphone in my right hand – is about to run out of batteries. So I have to stop here.
Stop laughing, Socrates.
IANS