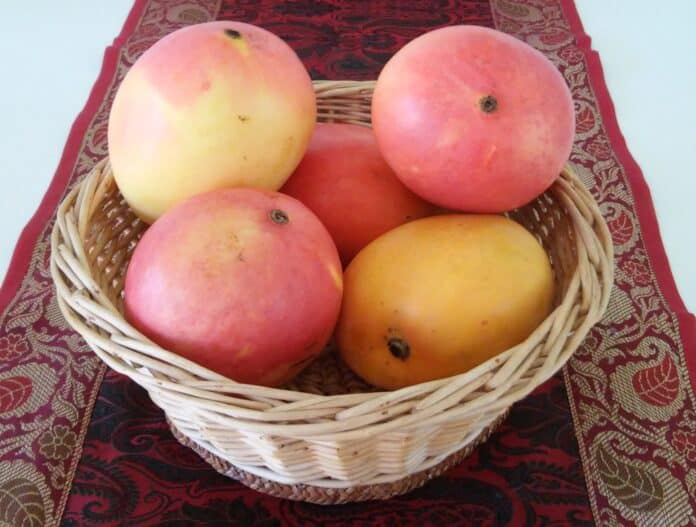 An homage to the king of fruits

These days, the pleasing sunshine hues of the mango greet us whenever we walk into a fruit shop or the fruit section of any supermarket. But now the season is on its way out, and it’s a good time to pay homage to this magnificent fruit which has been pampering our tastebuds over the past few months.

The mango enjoys the status of a universal fruit, and is cherished in diverse lands as ‘the king of fruits’ because of its alluring aroma and sweet succulency.

It is remarkable for its other properties too. The unripe fruit is a rich source of vitamin C, and as it ripens, the level of beta carotene or vitamin A in it increases. A mango also contains plenty of beneficial minerals, nutrients and enzymes as well as possessing phenomenal anti-oxidant properties.

A regular intake of mangoes helps to lower blood cholesterol levels, and so is useful in controlling hypertension and heart problems. Several varieties of mangoes are also an excellent source of our daily requirement of fibre.

If you have Indian roots, it may warm your heart to know that the mango is a gift from India to the world. The English name for mango finds its origin in the Portuguese term for this fruit Manga, which in turn was derived from the Tamil equivalent Mang-gai. In botany the tree is termed Mangifera Indica in acknowledgement of its Indian origins; the earliest record of mango cultivation in India dates back to around 4000 BC.

Apart from the Indian strain of mangoes, which is mono-embryonic, a second lineage with poly-embryonic seeds originated in Southeast Asia. Through most of the past two millennia, with increasing human movement between continents, the prized mango was brought by traders and pioneers from Asia to many tropical climes across the world. In its westward journey, the mango travelled from India to Persia, and further onwards to East Africa and finally to the Americas.

History tells us that mangoes were brought to the shores of Australia from the Indian subcontinent in the latter part of the nineteenth century by traders delivering horses to British India. These tradesmen were based in the coastal town of Bowen in North Queensland, which led to its stature as epicentre of mango cultivation in the pioneering years that followed. Visitors to Bowen are reminded of this by The Big Mango, which is a giant concrete structure in the shape of a mango, three storeys high. Indeed, the prized yield relished as Kensington Pride or KP, which is the most widespread variety of mangoes in Australia, is alternatively known as The Bowen or Bowen Special.

Today, the delicious fruit has become a naturalised produce of Australia. The native season starts in September in the Northern Territory, and sweeps across Queensland, New South Wales and Western Australia from November through February and even March.

Apart from the top favourite KP, other varieties of Australian mangoes to savour are Calypso, Keitt, Honey Gold and the rather intriguingly named R2E2, to mention a few. Many of these varieties are the result of dedicated research, and are renowned the world over.

But despite its universal spread and success, to this day the mango remains a timeless fruit of India, intrinsically bound with Indian culinary, as well as cultural and religious, traditions. As such, no tribute to the mango fruit can be considered to be complete without reflecting on its umbilical bond with India.

Lord Ganesha is often depicted holding a mango in his hand as a symbol of attainment. The fruit is symbolic of love and fertility for Hindus. Mango leaves are considered sacred in Hinduism and are used to decorate marriage and religious venues. The flowers are used in the worship Goddess Saraswati in Bengal. The mango leaf is used to sprinkle holy water during religious rituals. Buddha is known to have found tranquillity while meditating in a mango grove. The Jain deity Ambika has been shown standing under a mango tree in a rock sculpture found in the Ellora caves of Western India.

The ancient poet Kalidasa eulogised the flowering mango tree as the symbol of spring and romance. The Nobel Laureate Rabindranath Tagore penned many a line in Bengali in praise of amer manjari which means ‘mango flowers’ in the vernacular. We find a popular Bollywood duet set in the rainy season, with lyrics that accentuate the love theme in association with the mango tree: “Ambua ki dali pe gaye matwali, koeliya kali nirali” which roughly translates into English “as the merry cuckoo sings lustily on the branch of the mango tree”.

There is an elongated and curvaceous oval-shaped motif in Indian art, well-known in the western world as the paisley pattern, which is said to be a stylised representation of the mango seed, leaf, bud or the fruit itself. This is familiar to us variously as Ambi in Punjabi and Mang-kolam in Tamil, among other names, and is regarded by Hindus as an auspicious sign. It is omnipresent in Indian floor art or rangoli, henna, textiles, artefacts and jewellery designs, and has been used since time immemorial. The pattern is also associated with Persian traditions.

We know from historical chronicles that two foreign visitors to India in early times, the Greek conqueror Alexander the Great and the Chinese traveller Hiuen Tsang relished the sweetness and richness of mangoes during their sojourns in India. The Mughal emperor Akbar is credited with planting a mango orchard near Darbhanga in Bihar named “Lakh Baag” with a hundred thousand mango trees, such was his fondness for the fruit.

On a personal note, I must mention that my subconscious mind inevitably makes a spontaneous connection with India whenever my eyes spot on a pile of mangoes here in Australia or in any other land for that matter. I can still recall the tastes of Dussheri or Dashahari, Langda and Chausa varieties of mangoes that my siblings and I were privileged to snatch off in crazy quantities from our mango trees during childhood days in the terai region of Uttar Pradesh. Not to forget the tongue-tingling treats of pickles, chutneys and morabbas and the soothing drink Aam Ka Panna that were regularly conjured up from unripe mangoes by the adults around us.

Among Indian varieties of mangoes, special mention must be made of the delectable Alphonso of western India, developed in the sixteenth century by a Portuguese colonial nobleman named Afonso de Albuquerque who gave it his name. There is a treasure house of other localised produce to be savoured, among which the prominent gems are the Kesar of Gujarat, Banganapalli of Andhra Pradesh, Kishenbhog and Malda of eastern India, the Gulab Khas of Bihar and Neelam of southeast India. India accounts for almost half the world’s harvest of mangoes annually, but this is largely consumed in the domestic market.

The word for mango in India’s ancient language Sanskrit is Aamra, which has given root to its common name Aam across most of the country today. The widely used Urdu term Aam is an adjective meaning common, and through this coincidence, the point is driven home quite aptly that the mango fruit is abundantly available in India and continues to be affordable for the masses. The national fruit of India, and of Pakistan and the Philippines as well, has become a multinational phenomenon: the aam fruit of the world.