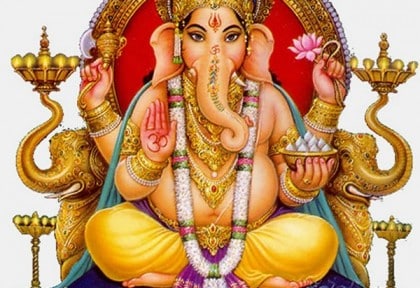 The complex symbolism behind the popular Hindu god Ganesha

Vignavinayaka, Vakrathunda, Lambodhara, Sarvasidhantha, Gajanana, Ganapati are just a few of the 108 names that extol the virtues of Ganesha.
The elephant headed, pot bellied elder son of Shiva and Parvati is not only the foremost God among the Hindu pantheon, he is perhaps the most loved too. In his capacity to remove all obstacles, Ganesha is remembered everyday by one and all.
Often associated with the auspicious ‘Om’, he is among the most enigmatic as well. Ganesha’s physical attributes are themselves rich in complex symbolism. In fact every part of Ganesha’s sumptuous body tells its own little tale.
Primarily, the image of Ganesha is a composite anthropomorphic one. Four living entities – man, elephant, serpent and mouse have contributed to the makeup of his figure. All of them individually and collectively have deep symbolic overtones. Ganesha thus represents man’s eternal striving towards integration with nature. He has to be interpreted taking into consideration the fact that despite evolution over many millennia, man remains closer to animal today than he was ever before.

The most striking feature of Ganesha is his elephant head, symbolic of auspiciousness, strength and intellectual prowess. On the forehead, the Trishula (weapon of Shiva) is depicted, symbolising time (past, present and future) and Ganesha’s mastery over it. All the qualities of the elephant are contained in the form of Ganapati. The elephant is the largest and strongest of animals of the forest. Yet he is gentle and, amazingly, a vegetarian, so that he does not kill to eat. He is very affectionate and loyal to his keeper and is greatly swayed if love and kindness are extended to him. Ganesha, though a powerful deity, is no less loving and forgiving and moved by the affection of his devotees.
Yet at the same time the elephant can destroy a whole forest and is in himself a one-man army when provoked. Ganesha is similarly most powerful and can be ruthless when containing evil.
Again, Ganesha’s large head is symbolic of the wisdom of the elephant. His large ears, like the winnow, sift the bad from the good. Although they hear everything, they retain only that which is good; they are attentive to all requests made by the devotees, be they humble or powerful.
While the large ears and head receive all information, the small mouth talks less and the tiny eyes represent utmost concentration.
Ganesha’s trunk is a symbol of his discrimination (viveka), a most important quality necessary for spiritual progress. The elephant uses its trunk to push down a massive tree, carry huge logs to the river and for other heavy tasks. The same huge trunk is used to pick up a few blades of grass, to break a small coconut, remove the hard nut and eat the soft kernel inside. The biggest and minutest of tasks are within the range of this trunk which is symbolic of Ganesha’s intellect and his powers of discrimination.
The curved trunk perhaps also represents the arousal of the powers of the kundalini. The trunk relates to the power of human mind. It must be strong enough to handle the external world, but delicate enough to explore the subtle realms of the inner sanctum.

Yet another intriguing aspect of Ganesha’s iconography is his broken tusk, Ekdanta – Ek meaning one and danta meaning teeth. Theologists believe that the two tusks represent wisdom and emotion. The broken left tusk signifies that one must conquer emotions with wisdom to attain perfection. It carries an interesting legend behind it:
When Parashurama, one of Shiva’s favourite disciples, came to visit him, he found Ganesha guarding Shiva’s inner apartments. His father being asleep, Ganesha opposed Parshurama’s entry. Parashurama nevertheless tried to urge his way, and a tussle ensued. Ganesha had at first the advantage, seizing Parashurama in his trunk, and giving him a twirl that left him sick and senseless; on recovering, Rama threw his axe at Ganesha, who recognizing it as his father’s weapon (Shiva having given it to Parashurama) received it with all humility upon one of his tusks, which it immediately severed, and hence Ganesha has but one tusk.
A different legend narrates that Ganesha was asked to scribe down the epic of Mahabharata, dictated to him by its author, sage Vyasa. Taking into note the enormity and significance of the task, Ganesha realized the inadequacy of any ordinary ‘pen’ to undertake the task. He thus broke one of his own tusks and made a pen out of it. The lesson offered here is that no sacrifice is big enough in the pursuit of knowledge.
Ganesha is often portrayed with six hands. One is normally shown in the abhaya (fearless) pose of protection and refuge and the second holding a sweet (modaka) symbolic of the sweetness of the realized inner self. The modak represents the reward for sadhana, while the prasad at his feet represents the world at one’s feet waiting to be conquered.  Ganesha also holds an axe to cut off bonds of attachment.
In the two hands behind him he often holds an ankusha (elephant goad) and a pasha (noose). The noose is to convey that worldly attachments and desires are a noose. The goad is to prod man to the path of righteousness and truth. With this goad Ganesha can both strike and repel obstacles. Yet another hand holds a lotus flower (padma), and it symbolizes the highest goal of human evolution, the sweetness of the realised inner self.
Ganesha’s pot belly contains infinite universes. It signifies the bounty of nature and equanimity, the ability of Ganesha to swallow the sorrows of the Universe and protect the world; the position of his legs (one resting on the ground and one raised) indicate the importance of living and participating in the material world as well as in the spiritual world, the ability to live in the world without being of the world.

The little mouse that Ganesha is supposed to ride upon is another enigmatic feature in his iconography. Lord Ganesha sits on a tray of laddus signifying the wealth and prosperity that he gave to his devotees. However, a mouse sits near the bottom of the statue to represent the ego that can eat away at the goodness of a person. At a cursory glance it seems strange that the lord of supreme wisdom has been granted a humble obsequious mouse quite incapable of lifting the bulging belly and massive head that he possesses. But it implies that wisdom is an attribute of ugly conglomeration of factors and further that the wise do not find anything in the world disproportionate or ugly.
The mouse is, in every respect, comparable to the intellect. It is able to slip unobserved or without our knowledge into places which we would have not thought it possible to penetrate. In doing this it is hardly concerned whether it is seeking virtue or vice. The mouse thus represents our wandering, wayward mind, lured to undesirable or corrupting grounds. By showing the mouse paying subservience to Lord Ganesha it is implied that the intellect has been tamed through Ganesha’s power of discrimination.

Any attempt to penetrate the depths of the Ganesha phenomenon must note that he is born from Goddess Parvati alone, and as such he shares a very unique and special relationship with his mother. The sensitive nature of his relationship with Parvati is made amply clear in the following tale:
As a child, Ganesha teased a cat by pulling its tail, rolling it over on the ground and causing it great pain, as naughty young boys are wont to do. After some time, tired of his game, he went to his mother Parvati. He found her in great pain and covered with scratches and dust all over. When he questioned her, she put the blame on him. She explained that she was the cat whom Ganesha had teased.
His total devotion towards his mother is the reason why in the South Indian tradition Ganesha is represented as single and celibate. It is said that he felt that his mother, Parvati, was the most beautiful and perfect woman in the universe. Bring me a woman as beautiful as she is and I shall marry her, he said. None could find an equal to the beautiful Uma (Parvati), and so the legend goes, the search is still on…
In variance with the South Indian tradition, in North India Ganesha is often shown married to the two daughters of Brahma (the Lord of Creation), namely Buddhi and Siddhi. Metaphorically Buddhi signifies wisdom and Siddhi achievement. In the sense of yoga, Buddhi and Siddhi represent the female and male currents in the human body. In visual arts this aspect of Ganesha is represented with grace and charm.

Likewise, no analysis of Lord Ganesha can be concluded without a mention of the mystical syllable Om – the most powerful universal symbol of the divine presence in Hindu thought. The written manifestation of this divine symbol when inverted gives the perfect profile of the god with the elephant head.