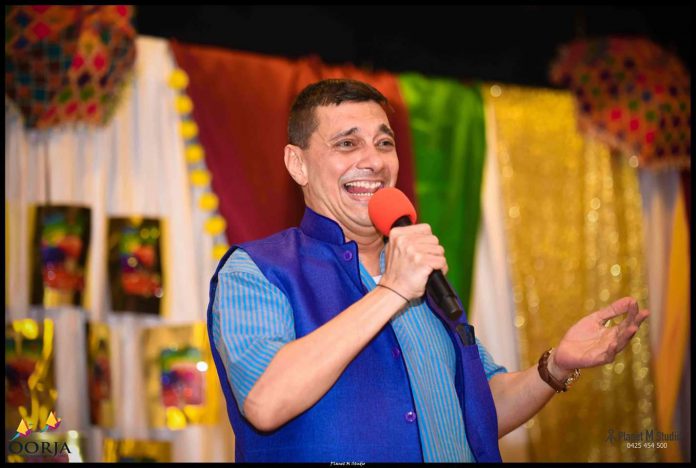 Melbourne’s MANDAR MADHUSUDAN VAIDYA is awarded OAM for service to the performing arts
Melbourne based retailer and artist Mandar Madhusudan Vaidya has added another accolade to his list of achievements, being awarded with this year’s OAM for service to the performing arts.
Making the rich tradition of Marathi theatre ‘accessible and enjoyable’ to Melbourne audience has been a joyful cultural experience for this performance artist.

“Theatre to me is living in a meditative state of life. It helps to pause and rest my mind within my daily routine of work, family and community,” said Mandar who feels ‘absolutely blessed and honoured’ to receive the OAM for his lifelong passion.
Mandar’s love for theatre began at the age of seven when he started accompanying his mother to her drama rehearsals. He was fascinated by the vibrancy of the sets and started replicating it in his primary school years by creating kids’ versions of the professional plays he saw.
The acting bug continued throughout his school and university days as he frequently produced, acted or directed plays. He considered himself very fortunate to have trained under the renowned Vikram Watve during his formative theatrical years.
During his last year in university in 1994, he formed Reaction, a theatre group along with some like-minded artists. Together they produced plays such as Bumbai Ke Kauvve (Hindi), Pratibimba (Hindi and Marathi), Amhi Latike Na Bolu (Marathi).
According to Mandar his group performed 250 plus shows, mainly at the iconic Prithvi Theatre. They did several performances at the Tata National Centre for Performing Arts (NCPA) theatre and toured Maharashtra and Delhi.

Finishing university with an MBA in Marketing, Mandar migrated to Australia in 2000. In 2002 Mandar took a postgraduate diploma in IT from Swinburne University and began work as a data analyst for Retail.
It was time to get back to his creative pursuits. For nearly a decade he continued to act, direct, sing and dance in many programs with the local Maharashtra Mandal groups.
“It was hard to dedicate so much time consistently; especially directing full length plays,” said Mandar sharing his theatrical journey.
“A play with a run time of 2-3 hours can take on an average 3 months of rehearsals, taking up every weekend from 9 am-5 pm. Dedicating that time to my art, however, offered me great satisfaction. Theatre thus became ‘a part time job’ for my soul,” said Mandar.
In 2012 he founded the not-for-profit Kalavishkar, where he directed Hindi plays and conducted acting workshops. His wife Manasi and daughter Soumya continued to support him in his endeavours.
In 2015 other theatre enthusiasts joined him and they formed the Natyadarpan Indian Theatre Academy (NITA). Collaboratively they developed their artistic and acting muscles.
Natyadarpan is a community organisation that aims to bring diverse artists under the same roof to project reflections of life experiences in a theatrical form. They conduct acting workshops and present dramas regularly to Melbourne audiences.

“We help developing actors, directors, writers, translators, singers, background music providers, stage light and sound specialists, promoters and set designers, covering almost every aspect of theatre,” said Mandar.
“I dedicate my award to the 100-plus members of Natyadarpan who have supported our endeavours, volunteered and worked tirelessly to take our theatrical activities to another level,” said Mandar.
“Theatre adds to the rich value system and culture of India and sharing it on one common platform aligns to the Indian philosophy of Vasudhaiva Kutumbakam or world family,” he continued.
Building a bridge between a community of artists and the broader community, Mandar continues to commit himself to creating theatre that goes beyond our everyday lives.