Man up, speak up 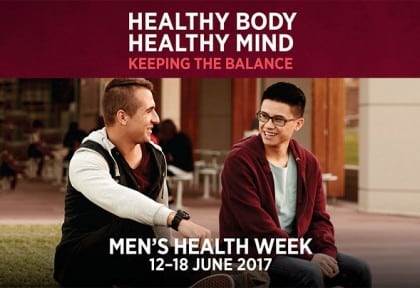 Encouraging men to talk about their health needs during Men’s Health Week, June 12-18

Men’s health and well-being was in the focus during ‘Men’s Health Awareness Week’ as one Sydney couple aimed to raise awareness in this area.

Consider these facts. Every hour at least four Australian men die prematurely from potentially preventable illnesses. On an average, men live approximately five years less than women. The suicide rate is approximately four times higher for men than women. A man dies of heart attack every two hours.
A particularly alarming fact is that almost one-quarter of all men (24%) have not seen a doctor in the past year.
In general, men are less likely than women to talk about health issues, until there is a problem. This can make it hard for men to acknowledge they have any health problem, let alone one which affects their social and emotional well-being.
To address these issues, men are encouraged to talk about their health concerns during ‘Men’s Health Week’. The 2017 theme for Men’s Health Week, June 12-18, was ‘Healthy Body Healthy Mind: Keeping the Balance.’

After close encounters with life changing illnesses, Sydney couple Vik and Bhavisha Bhandari decided to take on the task of encouraging all Australian men to take charge of their own wellbeing.
A few years ago, the Bhandaris got the shock of their lives when Vik’s otherwise healthy father suffered a stroke that left him paralysed on one side. Soon after that, Bhavisha’s father too experienced unexpected health issues. He passed away last year.
“It is extremely important to go and get check-ups regularly,” Bhavisha Bhandari told Indian Link. “We Indians, especially, don’t care about men’s health. We always focus more on women, and think that men can never have problems. The attitude needs to change.”
Before his demise, her dad got the chance to attend the gala event last year; he loved it.
Last year, the Bhandaris launched their black-tie community fundraiser ‘The Men’s Health Awareness Ball’. Continuing the tradition, the couple hosted the gala charity event at Sherton on the Park this year with the focus on promoting men’s health and well-being.
One of the guest speakers, Allan Sparkes CV, OAM, VA and a former front police officer, had battled chronic depression and emerged victorious. “Losing one’s sense of worth is a crippling thing,” Sparkes said to the gathering. He urged men to speak up and share their problems. Courage is not about bravery, he emphasised; it is about facing oneself.
He urged men to prioritise both mental and physical health and find a balance. To the family members, his message was, “Be supportive; be loving.”
Dr Michael Lowy, a sexual health physician, urged men to ‘Man Up’ and share their problems. He also urged men to adopt healthy lifestyle. Women tend to go to doctors for check-up more often than men, he said. “Men think they are Supermen, that they are invincible,” Dr Lowy lamented.

He stressed on getting a regular bowel screening to prevent bowel cancer, Australia’s second cancer killer after lung cancer. There are approximately 15,000 cases of bowel cancer diagnosed in Australia every year. Despite innovations and advancement in detection and treatment, prostate cancer has killed many men. Yet, fewer men want to talk about addressing the problems and getting regular checks.
There were silent auctions and live auctions organised at the charity dinner, the proceeds of which will be directed towards men’s health.
The gala event raised in excess of $38,000, the proceeds of which were directed to the Foundation 49 Men’s Health and Beyond Blue support service.
Last year’s event had raised $34,000, the proceeds of which were directed to the Prostate Cancer Foundation of Australia, Heart Foundation Australia, and Foundation 49 Men’s Health.