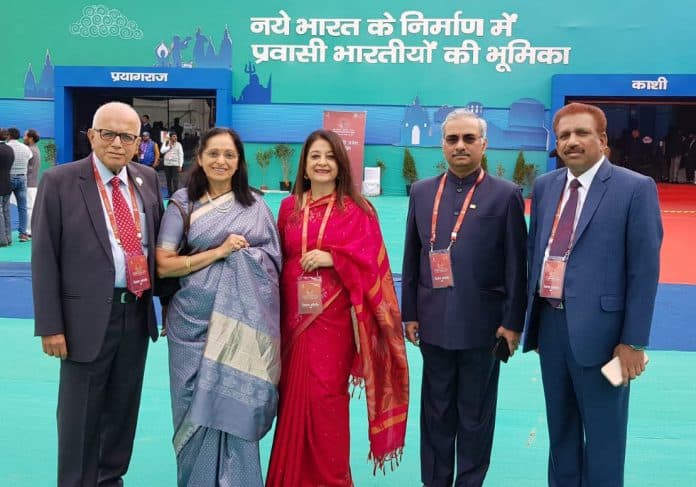 Reading Time: 6 minutesPravasi Bharatiya Divas (PBD) has been celebrated on 9 Jan every year since 2003, to mark the contribution of the overseas Indian community in the development of India. This day was chosen to commemorate the return of Mahatma Gandhi, India’s greatest pravasi, from South Africa to India in 1915, and change the lives of Indians forever. During the event, individuals of exceptional merit are honoured with the prestigious Pravasi Bharatiya Samman Award to appreciate their role in India’s growth.

I was honoured and privileged to represent our IABBV Hindi School “parivar” at the PBD 2019 held in Varanasi as an invited guest of the Government of India. This was my fourth visit – the first was in 2008 in Delhi, then in 2009 in Chennai which was followed by 2015 in Gandhi Nagar when I was the recipient of the Pravasi Bhartiya Samman Award. It was conferred on me by the President of India in acknowledgement of outstanding achievement in the field of education and community service and in recognition of valuable contribution in promoting the honour and prestige of India and in fostering the interests of overseas Indians.
This year’s conference was very special as it was an opportunity to reconnect with some of the past awardees from 2015 and get to know others from 2017 and 2019. It was great to hear about all the wonderful work that is being done by the Indian diaspora across the world, making a difference to their community and the countries they now call home. It was a proud moment for both Dr G. Harinath (awardee 2017) and I, to see our friend Professor Nihal Agar, someone who I respect and admire, receive the Pravasi Bhartiya Samman Award in 2019. It was great also to meet up with some of the other participants from Sydney.
*
The 2019 PBD was also special because it was held in Varanasi and we were given the opportunity to see some of the historical sights of Varanasi and Sarnath, visit the Kumbh and the Republic Day Parade. The Ganga Arti at the Ghats was incredible, as was an audio-visual laser presentation on Mahatma Gandhi. Varanasi, one of Hinduism’s holy cities, is home to the revered Kashi Vishwanath Temple. This temple has been an integral part of practising the Shaiva philosophy for a very long time. Destroyed and rebuilt a number of times, the present structure stands near the original temple site. Hindus from around the world try to visit the temple at least once in their lifetime – the belief being that the temple darshan and a dip in the Ganges will lead a devotee to Moksha, salvation.

The hospitality extended to us by the Government of India Ministry of External Affairs was amazing as were the arrangements made for all delegates. Special counters/desks were set up at Mumbai, Delhi and Varanasi airports from 19 to 27 January 2019, to facilitate smooth arrival/departure/transfer of PBD delegates from these airports. Detailed security arrangements were in place at all convention venues with personal, baggage and other equipment subject to security screening before they were permitted into convention venues. Varanasi city came forward to greet us with garlands, and with beautiful colourful murals painted on walls depicting its diverse religions and history. People on the streets came forward to ask us if we were enjoying being in their city.
The event ran over three days commencing with a joint inauguration of Youth PBD by External Affairs Minister and Minister of State (Independent Charge) for Youth Affairs and Sports. The event offered limitless opportunities for the young diaspora to engage with New India and to reconnect with the roots. They had been encouraged to participate in the “Bharat ko Janiye” Quiz competition and awards for this were presented by Shri Narendra Modi, Prime Minister of India in the presence of Prime Minister of Mauritius, H.E. Pravind Jugnauth, before his inaugural address of 15th Pravasi Bharatiya Divas Convention 2019.

The key note speech by Prime Minister of Mauritius, H.E. Pravind Jugnauth was most impressive; it showed how much the Indian diaspora of Mauritius is doing to preserve their Indian culture and language through the World Hindi Directorate.
Interesting plenary sessions were held throughout the convention – Role of Indian diaspora in capacity building for affordable solar power; affordable waste management and artificial intelligence in India; Giving back to India – opportunities and challenges; Indian community organisations working for Indian nationals in distressed situations; Indian diaspora’s role in capacity building for developing cyber capacity of India.
Cultural endeavours in the evenings kept us entertained as well as informed. An exhibition titled “Ancient India: Modern India” was organised to portray significant developments and progress made by the Government of India, highlighting specific schemes and initiatives launched by the Government and various State Governments, including schemes meant for Indian diaspora like NRI voting etc. They had also created an “Atul Bhavan” which showcased the life of the late former Prime Minister Atal Behari Vajpayee. The exhibition on different Benares weaves in silk, cotton, wool and linen had me, a textile freak, completely absorbed.

One of the highlights of the event was the dance drama by Bollywood diva Hema Malini, who along with her troupe, presented a dance drama on Ganga. Making splendid use of cinematic effect and drama, the ballet had many among the audience moved. The dance drama, staged for the first time, gave a heart-rending depiction of the condition the river has been reduced to in ‘Kalyug’ bringing to us Hema Malini’s message “It is our duty to take care of Ganga”.  The local audience welcomed her with the signature greeting of Har Har Mahadev.
*
Our visit to Prayagraj for Kumbh was truly a memorable and spiritual experience. I had been wanting to visit the Kumbh for a few years and could not believe that this was actually happening. It was a special moment to join the others in taking part in the Ganga Snan (holy dip) as the Sun was setting. As a lay Hindu I was not familiar with the rituals, but learnt about them from others in the group who were extremely knowledgeable. It was amazing to see the devotion with which everyone immersed themselves in the Ganga. Since we were taken to a special area we did not have to battle through the immense crowds that we had heard about. An amazing number of portable change rooms were provided for all.

The Kumbh is of special significance in Indian culture and is the biggest spiritual, cultural and religious gathering of humanity in the world. It also reflects the harmony of India’s many diversities – spiritual, cultural, intellectual, social and historical. In view of its greatness and uniqueness, the Kumbh has been recognised by the UNESCO as an ‘ethereal cultural heritage of humanity’.
The coming together of seers and scholars on the holy Sangam waterfront, in a way signals the symbolic presence of the Saraswati in the physical communion of the Ganga and the Yamuna. The Kumbh is believed to be the granter of all wishes and boons, hence described as ‘Sarvasiddhipradah Kumbh’. It is celebrated on the recurrence of those auspicious combinations of planets and constellations when drops of nectar had splashed on the earth, according to Hindu mythology.
In order for it to be an enriching experience for all devotees, the Uttar Pradesh Government had ensured the provision of full security and other necessary facilities, in an environment in tune with the spirit of the moment which were indeed praise worthy.
*
After Kumbh Mela, participants travelled from Prayagraj to Delhi by train (two-tier AC coaches). These trains were called the “Pravasi Bhartiya Express” and were inaugurated by our travel. Gen. (Dr.) V.K. Singh, Minister of State for External Affairs, travelled on the train with us and made time to meet and chat with all delegates.

The event concluded with the witnessing of the 70th Republic Day Parade on 26 January 2019 for which special passes for foreign delegates of PBD 2019 were arranged. Although I had seen this parade many times and had the privilege of marching in it in 1962, it was still a memorable and nostalgic moment. This year the parade was special as it was dedicated to Mahatma Gandhi commencing the celebration of his 150th birth anniversary.
*
Travelling and coordinating for a big group such as ours was indeed a mammoth task for the organisers and we have to acknowledge the efforts of Mr Rajeev Jain and Mr MP Singh and their team at the Ministry of External Affairs under the leadership of Mrs Sushma Swaraj, Minister of External Affairs of India, for making it a memorable experience.
I would encourage members of the Indian diaspora to attend the next PBD as it makes us even more determined to help at every level to take the relationship of Australia with India to even greater heights.
Read Anil Kumar Asthana’s experience of PBD 2019