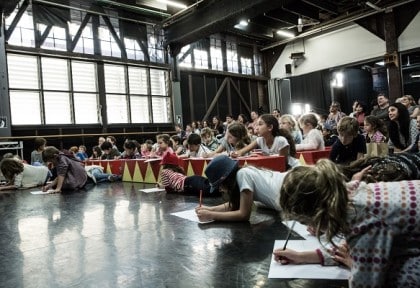 Reading Time: 3 minutesWe all have been in situations where someone has been nasty to us. We all have different ways to deal with mean people, but have you ever sat in a room full of people to discuss the matter? I recently got an opportunity to be a part of the ABC’s Short and Curly radio podcast at the Sydney Writers Festival. This episode was about how to deal with mean, nasty, horrible people in life, with a little help from Roald Dahl.

Our hosts for the evening were Matt and Carl. We tried to find the worst character from all of Roald Dahl’s books. Short and Curly called out two kids, Alex and Zoe who had won a quiz show about their knowledge of Roald Dahl’s books. Each of them read out a little bit of the The Twits and James and the Giant Peach to demonstrate the terrible type of characters in the books, however The Grand High Witch from The Witches and Mrs Trunchbull from Matilda were in high rating as well.
Special guest Maya, who was a rookie journalist last year for the ABC, thought that the Grand High Witch was the worst villain of Dahl’s books. She said, “I think that the Grand High Witch is the worst because she puts so may lives in danger and you can’t get any more evil than that.”

I personally think that Mrs Trunchbull is the worst of Dahl’s books, because worse than killing kids, is torturing them.
From what I learned, there are three definitions to a bad person. A bad person is someone who wants to hurt people; or someone who intends to do something bad, or someone who breaks the rules at home, at school or in society at large. What I understood from the conversation, is that actions shape character.
Matt also explained that if you’re a bad person, then you are not destined be bad always. “It’s never too late to turn around,” he said. Another thing that was explained was that it is hard for bad people to do good things, especially when they’ve been brought up in a society where people are used to doing bad things (e.g. The BFG). However, it is not impossible.

Roald Dahl himself thought that bad characters are interesting because it’s all boring when you have no baddie. You usually wish that the bad guy was never in the book but if he wasn’t, and then there wouldn’t be much fun. I came to know this because we all watched a small video on what Roald Dahl thought of his books. To help us work out what Roald Dahl meant, Carl dressed up as a baddie. He wore a black cape, a pointy hat and walked all hunched over. His attitude was a bit rough and harsh, just like a baddie. As we watched Carl, the question was raised, can you judge someone by the way they look or sound? My answer was no. In mystery stories, you can’t really tell who the baddie is. Someone may act like the good guy but could actually be the bad guy. Another good example is in the movie The Hunchback – he looks ugly and like a villain but actually has a kind and loving heart.
Afterwards, Maya thought Carl was being a baddy because we all made Carl think he was a baddie by calling him one. Maya concluded that just putting Carl in different clothes and treating him differently could change who he was. Matt and Maya hatched a plan. They would make a pie and splat it in Carl’s face. His clothes would get dirty and he would take them off. When the evil clothes went, so would the evil attitude. While Maya was getting ready, Matt did some thinking. He thought, “If I play this prank on Carl, will I become a bad person?” We all had to answer the question, should we show sympathy to evil people? My answer was yes. It won’t do any harm to forgive, but it could do harm if you don’t show sympathy. The baddies could become meaner to us. In the end Matt and Maya thought that punishing Carl was probably not the best thing to do… but Carl got pie in his face any way. It was hilarious!