The students of Gopa Kuteeram explore the life and teachings of Krishna, writes SMRITI SEKHAR 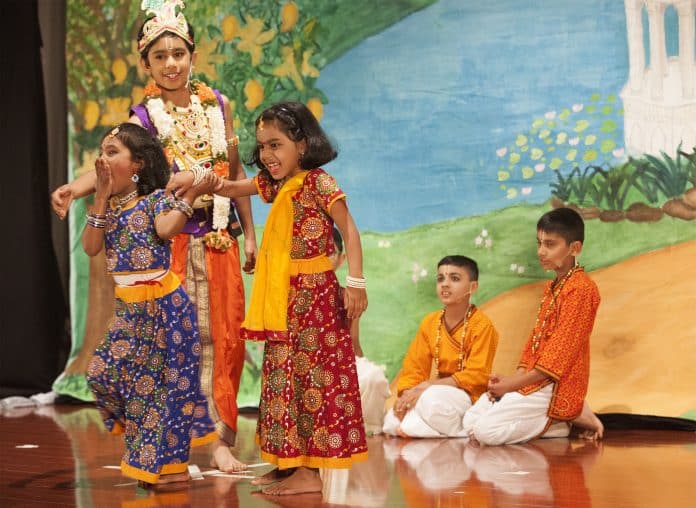 Reading Time: 2 minutesJust one of the many paths to the attainment of the Supreme, Bhakti is the practice of love and devotion towards God. A simple way to do so is to reflect upon the various Leelas, or divine plays of the Lord. Audience members were treated with an opportunity to do just this recently, through a spectacular theatrical production presented by 32 enthusiastic young Indian-Australians.
Held on 6 October at Durga Auditorium Regents Park, Majestic Brindavan was a stage play enacted by the students of Gopa Kuteeram (GK), the educational wing of the Global Organisation for Divinity (G.O.D) Australia.

G.O.D is a spiritual organisation with the prime objective to popularise Nama Kirtan for universal peace and love as advocated by their spiritual master His Holiness Sri Sri Muralidhara Swamiji.
The event began with appropriate invocations, to the traditional custodians of the land as well as to the gods of the Hindu pantheon. The dance number that followed, set the backdrop for the evening: to the lyrics of one of Sri Sri Swamiji’s compositions, the Rasika Dance Academy dancers expertly explored the divine and blissful possibilities of Nama Kirtan through their Bharatanatyam routine.
Then, as the stage lights came on, the student actors of GK took us straight to the time of Krishna.
Masterfully punctuated with well-executed song and dance sequences, the play’s scenes presented a collection of short stories which brought Krishna’s boyhood in Brindavan to life. The script felt like a refreshing departure from the usual with its unconventional yet extraordinarily welcome and appropriate focus on the lived experience of the gopas and gopis. In illuminating (literally!) these characters as an aspect of the Krishna Leela, director and co-writer Dinesh Ramanan reminds the audience of the enduring divine effect that Krishna had on those He surrounded. The stage had been transformed to Brindavan with an exceptional intricately painted backdrop and similarly well-used props.
A play’s script remains a script until it is breathed life into by the work of the actors. My appreciation extends to every individual child on stage who not only delivered their lines flawlessly but also understood their characters and emoted appropriately.
A scene that left me stunned and poignantly moved was the soliloquy of Yashoda as her teenager Krishna prepares to return to Mathura. The character tearfully lamented her child’s departure then while gradually reflecting upon his life in Brindavan ultimately gained courage from her son’s strength of character. The adept actress portraying Yashoda closes the scene by declaring ‘Life was simple. We were complete’.
A grand finale dance sequence to the lilting and catchy Marathi bhakti geet of ‘Za Ga Ma Ga: Krishna Janmala’ concluded the entire show in a rightly ‘majestic’ manner. The presence of all the members of the cast and crew of the play on the Durga Auditorium stage served as a fitting reminder to the power of a community-driven platform for talent showcase. To illustrate the life of Krishna in play form (just as He would have!) was indeed noble and a true delight for the audience.
The ‘Rasa’ theory from the ancient treatise Natyashastra outlines that the goal of Art is not only to merely entertain audiences, but to elevate them to a higher realm of their own conscience where they are able to contemplate spiritually and morally.
I am proud to say with full confidence that the Gopa Kuteeram students along with the support of their parents and the organisers made that possible for me, a joyful member of the audience.
Pictures: Karthakayan Venkataramani and Abhishek Ramasheshan
- Advertisement -
Share
WhatsApp
Facebook
Twitter
Linkedin
Previous articleThinkers and Link-ers
Next articleHelicopter Eela: Review