Borderless Gandhi, a foundation set up by the Perth-based Nilesh and Lene Makwana, launches a new exhibition 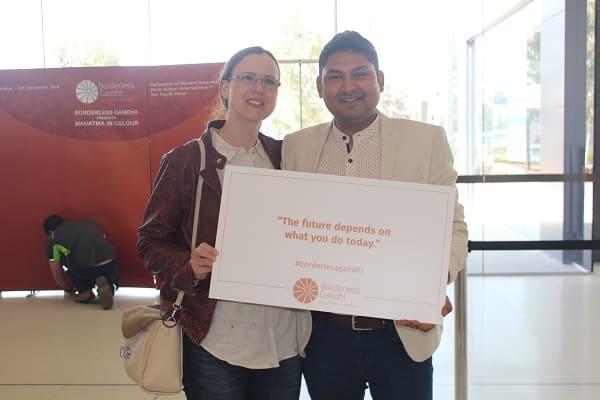 Reading Time: 4 minutes“There’s more to life than increasing its speed.”
This MK Gandhi quote at a tube station in London stood out to a young Nilesh Makwana, an Indian student at Cambridge newly arrived from India.
Perhaps seeing a familiar name so prominently displayed offered him some comfort in his new environs at the time. But the effect it had on him would set into motion a course of action that would change his life forever.

A Perth resident now, Nilesh and his artist wife Lene have just launched their second artistic exhibition based on the life of Mahatma Gandhi, as part of the activities of their foundation Borderless Gandhi.
In the exhibition entitled Mahatma in Colour, the Makwanas present a collection of rare photographs from Gandhi’s life, digitally restored and coloured. Launched on 2 Oct 2018, the exhibition is located at three centres: at the Parliament of WA, at Perth Airport International Terminal 1, and at the Pan Pacific Hotel.

“The photos belonged to Gandhiji’s son Devadas, and many were taken by him in the early 1900s until the end of his life in 1948,” Makwana told Indian Link.
They encapsulate the essential elements of Gandhiji’s philosophy of peace, equality, tolerance and nonviolence, values that need to make a come-back in our contemporary lives in the modern world.
The restoration work was commissioned by the Berlin-based GandhiServe Foundation, which has been collecting Gandhi memorabilia since it was launched in 2002 by Peter Ruhre. Selections from their 4,500 images have been seen in UK, India and Canada.

Earlier in 2016, the Makwanas’ Borderless Gandhi presented its first exhibition Mahatma in Me, featuring the work of Delhi artist Vibhor Sogani. Large sculptures in stainless steel presented to viewers the visage of MK Gandhi: the intent, according to the artist, was that in the reflection, people would see the world as it passed by, or their own selves, possibly find their souls, and act to realise the Mahatma within.
And that, in a nutshell, is at the core of Borderless Gandhi – to feel inspired by the principles that ruled Gandhi’s life.

Nilesh admits that he himself has found much solace and motivation from the man’s teachings, especially “at times when life’s challenges became less than sweet”.
Very early on, for example, bogged down on a particularly stressful day at his first job at Heathrow Airport, a chance encounter with another Gandhi quote brought him back on track: ‘To lose patience means to lose the battle’.
“As a young man in the UK, I found Gandhi propping up a lot in my daily life,” Nilesh reminisced. “Not just in the random quotes that strangely struck a chord, but also in the classroom, in the biographies I had begun reading of world and business leaders, even in the conversations I would have with casual acquaintances, for whom Gandhi was the most well-known Indian. There were many discussions not just about his philosophy of equality and non-violence but also his particular take on civil rights, as well as his views on the economy. Growing up in India, Gandhi had been in front of me all the time, but he did not affect me at a deep level.”

Finding himself drawn to the man, he began to devour information on Gandhi from libraries and museums. When he met the Norwegian-born artist Lene, he found she was deeply influenced by Gandhian values herself. As they travelled to India visiting Sabarmati and other historical sites related to the man, and finding rare books, the idea of the setting up a foundation for Gandhian thought began to take shape.
“Lene came up with the name Borderless Gandhi,” Nilesh revealed. “She observed rightly that Gandhi’s messages transcend borders, and that he belongs to all humanity.”
The Makwanas hope that this very idea will resonate with the people who see their latest exhibition, particularly the 3,000 primary school kids who are due to visit Parliament in the coming weeks.
“Special activities have been planned to engage the youngest visitors, with competitions and prizes earmarked for them,” he divulged.
Of course Gandhi features in Nilesh’s daily life and work as well. As an IT entrepreneur, he delivers tech services for social impact, working on projects with disability services, aged care providers and Indigenous education.
Which of the photographs in the current exhibition holds particular appeal for Nilesh? He replied for a moment’s ponder, “I love the image of Gandhiji having the morning newspaper read to him, in his later years. Did you know, he had assigned this job to a Harijan, one of the ‘lower castes’, in a bid to integrate them into normal society.”
And which image, we ask, does he find non-Indian viewers drawn towards? “The ones that show Gandhiji interacting with Winston Churchill.”
Now that’s an interaction that can be the subject of an entire exhibition in itself.
The exhibition Mahatma in Colour runs until 9 Nov 2018.