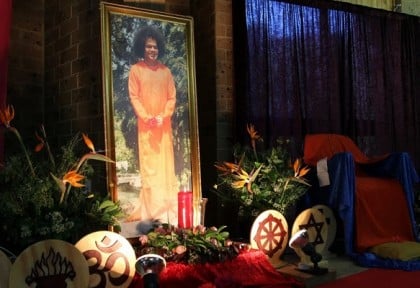 A weekend with Sathya Sai at Normanville

After driving with friends for more than an hour, through green and rolling hills and meadows, dotted with cows and sheep, we arrived at the sprawling Dzintari Latvian Camp at Normanville. We were there for a weekend camp organised by the Sathya Sai Organisation, South Australian Chapter, themed ‘Love is…’
My daughter and I had looked forward to this with excitement.

Normanville is about 84km south of Adelaide. Situated next to the mouth of the Bungala River it is the largest regional centre on the western side of the Fleurieu peninsula.
The camp site itself had quite a few dormitories with bunk-style beds, a large kitchen cum conference hall, vast surrounding paddocks and the view of the ocean. This took the cake, and whenever I stepped out, I found myself staring open-mouthed. Appearing like a vast bowl because of the hills at the two ends, the changeling water was at times molten silver and clear blue, greeny-gold, or sunset pink-hued at others.

The programme had the morning wake-up song or Suprabhatam to Swami, as Sathya Sai Baba is lovingly called, followed by lead and follow style devotional singing. I then lead a short yoga and Pranayama session, which was followed by breakfast.
There were at least 100 people, young and old, some having come for the entire weekend and others as day visitors. Five-month-old baby Ojas and 75 years young Amma, as she is known to all of us, formed the two ends of the delightful spectrum.
Children as young as five, along with older girls and boys, woke early, ate heartily and played non-stop, be it basketball, soccer, mini-golf or board games. They attended just a couple of sessions in the conference hall and led the Bhajans one evening.

We adults had the pleasure of attending riveting talks of a former student, Amitabh Duttagupta, from the Sathya Sai Educational Institutions, based in Puttaparthi, India. He took us up and down an emotional roller-coaster ride as he shared snippets from his life in Puttaparthi blessed by Sai Baba’s constant physical presence.
Laughter and moist eyes alternated listening to his memories as he unfolded his heart before us.
There were other speakers too who were interesting and engaging, all working around the central theme.
The small group of ladies who cooked all through the weekend were inspirational, cooking and serving in time with happy smiles and banter.

Any self-respecting camp should have a bonfire and so we did, and by golly, what a huge bonfire that was! Marshmallows and hot chocolate vied with dancing around the fire to songs both devotional and general.
We were fully satisfied by the bonfire, my music loving little one and me.
The flames, the glow of the fire, the people, the food… at the heart of each event we felt the theme ‘Love is’ shining through us, and we are longing for the next camp already.