Long ride on my motorbike 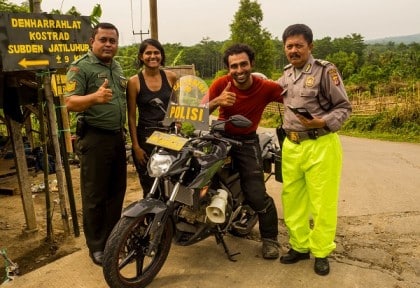 When one plans a motorcycle ride, it is rarely a journey across Australia, and almost never across eight countries spread over two continents.
But that is exactly what Iyron and Sasha D’Silva, a young couple based in Brisbane, had in mind, when they rode a 2008 Yamaha motorcycle from Australia to India, covering a staggering distance of 25,400 kilometres.


The couple had worked on the trip for almost a year-and-a-half, which included meticulous planning – obtaining visas, preparing road maps, and learning motorbike maintenance. Also involved was saving some money, so that they wouldn’t return home broke.
“We did not approach any sponsors, as we knew this was our first trip and we wanted no restrictions,” explains Iyron, who enjoys long riding experiences.
“During testing times, the surprise of what lies ahead the next day is what pushes me to keep going.”

Iyron and Sasha began their journey on August 21, 2016. They passed through Timor Leste, Indonesia, Malaysia, Thailand, Myanmar and Bhutan, before reaching India and their final destination Goa, ahead of Easter celebrations with their families.
According to Sasha, every country had had its own beauty and unique attractions.
“Timor was all adventure and off-road. Indonesia was everything from great winding twisties in Flores to the chaos in Java. Malaysia was a melting pot of Indian, Malay and Chinese cultures.”

On the other hand, Iyron recalls, “Rural Thailand is nothing like what is portrayed of Thailand. Myanmar was a totally unexpected surprise, with great roads, beautiful landscapes and amazing cuisines. And Bhutan was a whole different world by itself, full of surprises and mad dangerous adventure riding.”
Sasha went on multiple solo tracks during the expedition to interact with the local population in the different countries.

By far, their toughest part of the journey was in India. “There were multiple instances of trucks coming in our lane to overtake and forcing us to go off the road,” the duo recall with a shudder.

On two occasions during their epic journey, the couple had no road to cover: this was when their motorcycle was shipped from Darwin to Timor Leste and then, from Indonesia to Malaysia.


According to Iyron and Sasha, one of the many memorable moments was camping on Christmas Eve in the Bromo Tengger Semeru National Park in Indonesia.
“It was a stunning location from where we could see the sunset behind the Mount Bromo crater,” Iyron recounts. “It was truly amazing, we had a few beers, takeaway dinner and went to sleep.”
Sasha chimes in, “We woke at 4.30am with loud noises and crowds of people around our tents. We then realised we were camped at a vista point, from which people come to view the sunrise! There were some 200 people there with tour guides and tea stalls. It was like sleeping in serenity and waking up in chaos! We can never forget that experience.”

A long motorcycle ride from Australia to India like this comes with multiple challenges.
“Iyron faced a lot of challenges with visa requirements due to his Indian passport. Before embarking on the journey, Iyron rode from Brisbane to Canberra to collect visa information from various embassies. Thailand and Malaysia proved to be a nightmare, regarding paperwork to get into the country,” says Sasha.

“A few of the embassies also provided Iyron with incorrect information, while some websites were not user-friendly. Once he got into these countries, it was a completely different scenario. He enjoyed himself.”
“This was a challenge because we did all we could in terms of research and preparing our paper work. However, officials in some countries had no time to entertain certain nationalities or there is just no room for explanations or reasoning.”
Other challenges the couple encountered were when Iyron had a fall in Timor Leste and had to spend a month recovering from a partial tear in his right knee ligament, and two breakdowns of the motorcycle along the way.

Are these mishaps going to discourage future endeavours? Certainly not!
Having successfully undertaken their Australia-India trip, the couple is now saving money to travel all over Australia and thereafter cover the South American continent on their motorcycle next.
- Advertisement -
Share
WhatsApp
Facebook
Twitter
Linkedin
Previous articleWatch a diamond crack under pressure
Next articleThe Round round-up