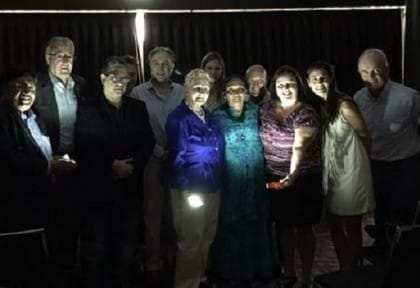 SolarBuddy and FairBreak.net team up to help bring light to those living off the electricity grid

In an effort to help socio-economically disadvantaged women, not-for-profit organisations SolarBuddy and FairBreak.net presented 600 lights to the Cricket Club of India and Global Cricket Schools to be distributed to impoverished localities in India which exist off the electricity grid.

The lights, which were provided by sponsors, the Australian Computer Society, were formally handed over to Sachi Bajaj from the Cricket Club of India and Global Cricket Schools on 17 January at an announcement and presentation ceremony at Darling Harbour, Sydney. The lights will be delivered to the Sri Ayyappan School in Bangalore, along with other communities throughout India, particularly in the south. Each light will provide eight hours of charge and eight hours of illumination.
The collaborative project by FairBreak.net (which also incorporates the Women’s International Cricket League) and SolarBuddy, was initiated as the organisations recognised the significant number of people in India living in the dark.
Shaun Martyn, Co-Founder of Women’s International Cricket League (WICL) and FairBreak, said that approximately 20 per cent of people, globally, are affected by energy poverty and live in darkness. “In India, we see a lot of communities and areas where people are living off the electricity grid and that’s a significant issue,” Martyn told Indian Link.
Additionally, both FairBreak.net and SolarBuddy decided to focus on women due to their often limited opportunities.
“Women and girls in these communities don’t get the opportunity to read and educate themselves as much as they should – it’s mostly boys,” Martyn said. “If you can educate women, everything about their lives improves.”

Sachi Bajaj expressed his gratitude for receiving the lights, and said they were part of the establishment of “a wonderful program for India”.
The CEO of the Australian Computer Society John Ridge, expressed his pleasure in working with SolarBuddy and FairBreak on this initiative.
Other partners which were also present at the ceremony included The Edinburgh Business School, Pymble Ladies College, The Commonwealth Businesswomen’s Network, Prof Shirley Randell AO and Geoff Lawson OAM.
In describing the initial idea and purpose behind FairBreak.net, Shaun Martyn said he was compelled to work on a corporate social responsibility program that would enrich the lives of those in need.

“Over four years ago, we started and created the Women’s International Cricket League,” he told Indian Link. “Right from then, we were looking for a corporate social responsibility initiative to work on, creating opportunities for women while using cricket as a vehicle for that. All our work is for education and creating opportunities.”
From here Martyn hopes to continue to work towards hosting the first WICL tournament in Singapore. He also hopes to create as many opportunities as possible for women around education and knowledge alongside SolarBuddy and other partners.
While many lights have already been distributed, efforts by the public and community in Australia are also vital for ensuring that lights are sent to as many communities and developing regions. School children in Australia are able to gather lights together and send them to other people in the world. Additionally, small and large-scale corporations are able to have their lights branded; these are also tax deductible.