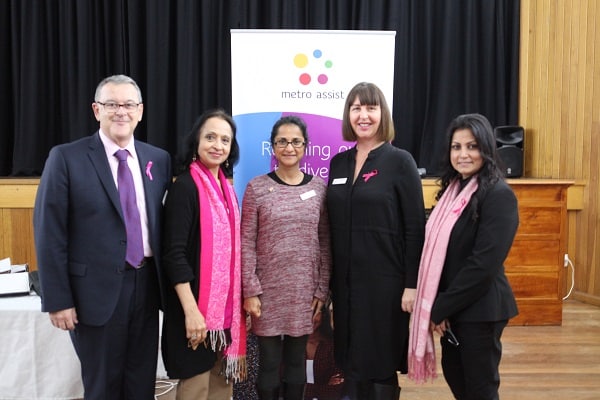 Reading Time: 3 minutesFact: Breast cancer is the most common form of cancer diagnosed in women in NSW.
Fact: As many as 1 in 8 women will have a brush with the disease in their lifetime.
Fact: According to an Australian Government estimate, 2018 will see 18,087 women afflicted by breast cancer and a staggering 3,128 lose their battle against it.
The scenario begs the question: why aren’t more women talking about breast cancer? And the more important question: why aren’t more women participating in breast cancer screening?


It was precisely these questions – and more – that were addressed at the recent Breast Screen Awareness in Migrant Communities held at the Lakemba Senior Citizen Hall, where 80 women from varied nationalities were invited.
The project, an initiative of the not-for-profit organisation Metro Assist, is funded by the Cancer Institute NSW and aims at educating Culturally And Linguistically Diverse (CALD) communities about the important of breast screening as an early detection and prevention measure.
Moushumi Martin, Breast Cancer Project Officer at Metro Assist, told Indian Link that the idea was to increase awareness on the subject through regular information sessions, excursions and discussions.
“We were thrilled to see such a healthy turnout of ladies from Indian, Pakistani, Bangladeshi, African, Indonesian, Rohingya and Chinese communities at the event,” she said.
“In some cultures, breast cancer is still considered a stigma and a taboo subject. Their presence bore testament to a progressive shift in the mindsets about the disease.”
The attendance is particularly engaging in light of a report published in 2010 by the Federation of Ethnic Communities Councils of Australia (FECCA) that said ‘Culturally and linguistically diverse communities are often under-served in the screening process, more vulnerable during the cancer treatment phase and less likely to utilise support services.’

It has also been established that the migrant women diagnosed with cancer have poorer outcomes compared to their non-migrant counterparts. The screening rate within migrant communities is much lower. This prevents the disease from being detected in early stages, resulting in lower survival rates and higher rates of reported side effects.
These dismal statistics underline the importance of educational campaigns like the one held by Metro Assist. The event convened on 31 May, kicked off with a welcome note form Moushumi followed by an address from Metro Assist CEO Lou Bacchiella and an opening speech by Trudy Phelps, Relationship Manager at BreastScreen NSW. The program was officially launched by Bankstown Deputy Mayor Councillor Nadia Saleh, after which the Advisory Committee was introduced to the audience. The six-member committee representing various agencies consisted of Dr Zakia Hossain, from the University of Sydney, Kate Mclean, from Canterbury City Community Centre, Lie Hua from Settlement Services International, Maria Chang from Chinese Australian Services Society, and Karen Richa and Melanie Ireland from BreastScreen NSW. The event also included a session by breast cancer survivor Boshra Masri, who recounted her story of personal struggles, unwavering resilience and ultimate triumph in the wake of her breast cancer diagnoses a few years ago.
The crescendo built up by her powerful narration was maintained by the screening of a short video about Firoza Azeem and Abida Sultana, two more breast cancer survivors from CALD communities. Their stories were deeply moving and drove home the importance of early screening in increasing the rate of survival and the quality of life afterwards.
The short film concluded the program for the evening and the ladies rounded it off with a scrumptious iftar before heading home with an improved understanding of the dogged disease, resolving to give themselves and other women in their lives the best chance to fight against it.

Their mobile van will be in Lakemba until 22 June. There are also permanent offices peppered in convenient locations all over the state. No doctor’s referral is needed and the appointment takes only 20 minutes. The imaged are analysed by at least two specialist doctors for accuracy of diagnoses. All BreastScreen NSW radiographers are females and interpreting services are available for those who need it.

Find your nearest BreastScreen service at www.breastscreen.nsw.gov.au or call 13 20 50 to make an appointment.