At last, feminists of colour 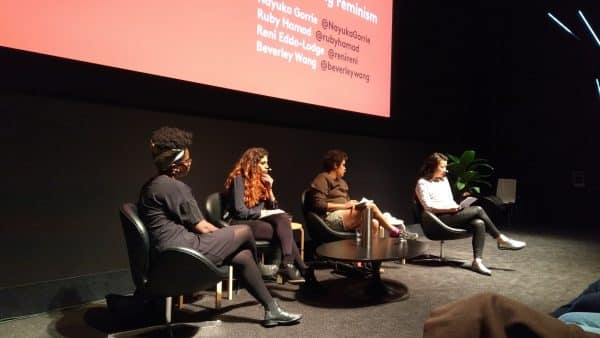 A day spent listening to women speak about feminism.
Heaven.
And one, let me tell you, that is rare to find, given how dismissed and ignored the discrimination faced by over 50% of the human population (since the beginning of human existence) remains.
But at MWF 2017, I got to engage – forty to fifty precious minutes at a time – with not only my identity as a feminist, but as a feminist of colour (ie ‘FOC’. Hmm, wonder why hasn’t this become an official term?)
Hands down for me the standout item on MWF’s feminist programme was ‘Decolonising Feminism’; I joyously booked my place two weeks beforehand, and I wasn’t disappointed.
Moderated by journalist Beverley Wang, the panel brought together three women of colour (four, counting Beverley!) to discuss the colonisation of feminism, intersectionality, and the true meaning of white supremacy.
The fact that feminism has been colonised by white women is the elephant in the room of modern-day female empowerment. As Gunai/Kurnai, Gunditjmara, Wiradjuri and Yorta Yorta woman Nayuka Gorrie remarked, “Black women have been feminists for a long time. It’s not this thing that white people invented.” However, as she pointed out, the history and ‘canon’ of feminism is perceived as largely white and its successes through the lens of benefits to white women; for example, celebrating women’s suffrage in Australia, which overlooks the simultaneous oppression of Indigenous women.
“You can’t separate the black woman in this country from the colonial experience,” she said, citing the sexual violence perpetrated upon Indigenous women, the breaking up of their social structures which changed gender roles, and the very real and disturbing fact that she, a black woman, has been in many ways “socialised to be a white woman.”
Daily Life columnist Ruby Hamad spoke strongly about how feminism will continue to be colonised as long as we refuse to acknowledge the ongoing exploitation of people of colour– cultural, economic, military – that characterises white supremacy around the globe. She also highlighted the misuse of ‘intersectionality’ (a term originally coined to specifically describe the lack of job opportunities for black women in the ‘70s). It’s a real buzz word these days, but it has also been used against her by white feminists when she critiques things that they see as ‘untouchable.’
Even when intersectionality is recognised, as she pointed out, “what we see time and time again is white women being elevated… every single time we try to say something, we’re told, well, not this time.”
London writer Reni Eddo Lodge, author of Why I’m No Longer Talking to White People About Race, said she has “checked out” of feminism as a movement and described it as “a very narrow gender-only analysis of feminism that is quite interested in changing the world for a particular kind of woman. And when you say, hey, other women exist, tends to be upset, defensive, and starts to cry.”
Eddo Lodge is also critical of the way popular feminism tends to latch on to and celebrate films, product advertisements, TV shows, and give them “the stamp of validation for Progress”.
“I’m very unconvinced by that,” she said. “None of these things should be counted as wins…the brands are not on our side.”
As Nayuka Gorrie pointed out, white supremacy is built into fundamental systems in Australia. “It is our parliament, it is our education system; for twelve years, we learn about white people, we’re learning white history, we’re learning white language, we’ve got white people teaching us… that’s white supremacy, only learning white history.”
She also highlighted that it “has been much easier for settlers, and settlers of colour, to be able to occupy spaces that still Indigenous people can’t. In a settler colonial society, there is something about indigeneity that equals erasure.”
It’s worth noting, in conclusion, what all three writers said repeatedly:

And yet, as Ruby Hamad said, we still write from “a position of limited power.”
“Why after all these years are we not in the positions where we get to decide, we get to commission, we get to say ‘this is what we’re going to publish?’”