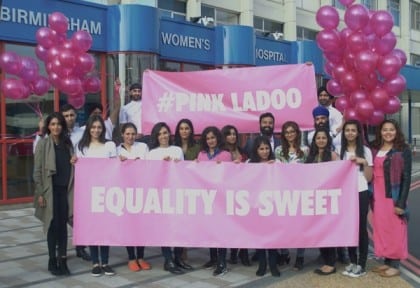 In a country where it is illegal to discriminate based on gender, it is confronting to think that, for some, the birth of a baby girl instead of a boy is considered ‘disappointing.’ However, for many Indians living in Western nations such as Australia, that is the perspective.
By Indian tradition, it is customary to distribute sweets, particularly ladoos, in celebration of the birth of a baby boy. The Pink Ladoo Project wants to plant the seeds of change, and encourage South Asian families to open the conversation about gender prejudice in the community, by distributing pink ladoos at the earliest opportunity in their daughters’ lives, her birth.

Pink Ladoo was launched in the UK on 15 October 2015, the International Day of the Girl Child, by founder Raj Khaira. Having just celebrated its first anniversary, the campaign now has 22 members across three continents. The Australian arm of Pink Ladoo is led by Sharan Aulakh and assisted by 22-year-old, Melbourne-based, Daizy Maan in the role of campaign adviser.
“The campaign is all about awareness and spreading the word,” Deakin University student Maan said. “One of the unique things about the campaign is its specificity and, as a result, it has allowed us to receive specific stories.”

The essence of the Pink Ladoo Project is to create awareness of the bias toward men prevalent in South Asian communities, highlighted in the gender-based custom of distributing sweets, and celebrating only at the birth of a boy. The subject has gained such momentum that the campaign and its ambassadors have been featured on international platforms such as The Guardian.
“One of the strongest factors of the campaign itself is how organically it has grown. The fact that there are over 20,000 ‘Likes’ on the Facebook page alone validates that there is an issue,” Daizy said.


Through their strong social media presence, the project shares stories sent in by people across the world. While this creates awareness, Daizy said that this also encourages others to take note and encourages the celebration of the birth of a girl. “People that may be looking at the Facebook page will see others distributing ladoos and then they may want to do the same!”
For the official Brisbane launch, the Australian arm distributed pink ladoos at the city’s Diwali Fair in early October, an event that saw a crowd of over 3,000 in attendance. “We handed out the ladoos, and people asked if they needed to pay. We said, ‘No, we just want to have a conversation,’” Daizy said of the event. “People often ask us if they can donate money and we say, ‘Hey, we don’t take money but you can tell us your story and help us spread the word!'”
The campaign has a positive focus, encouraging celebration of the birth of a baby girl as much as the birth of a boy. For those who doubt the prevalence of the issue, especially in Western nations, Daizy noted, “People won’t talk about or create an issue where there is none. People come to us to share their personal stories and send us photos. We can respond to those who object with the facts and stories that we have.”

Restricted access in hospitals has proved to be a challenge for the Australian arm in promoting awareness of their cause. At the UK launch in 2015, the team distributed boxes of pink ladoos to the families of all newborn babies at Birmingham Women’s Hospital.
“When we tried to do that in Australia, we experienced significant challenges,” Daizy said. “The Indian population in Australia is large but not as large as in the UK or in Canada, so hospitals did not understand why this initiative was important. So many people are unaware of it.”
The prejudice and favour towards boys is built upon strong, traditional familial values and accepted gender roles.

“Very well educated families still think like this because it becomes a wealth and inheritance issue,” Daizy noted. “A lot of Indian parents, especially first generation [migrants living in Western countries], think that the son will look after them when they are older, but their girl will get married and move on with her husband’s family.”
However, the issue is something that people across the world feel strongly about.
“Beyond the liking and commenting, people are sharing their stories and ultimately, celebrating their girls as much as their boys,” Daizy said. “The stories we receive from people validate that there is an issue, but also show how they are challenging it.”

For Daizy, Boroondara’s Young Citizen of the Year 2015, her involvement with Pink Ladoo hits a personal note. On the birth of her sister, her parents were told not to worry as “the next one will be a boy.” They were also encouraged by others to have another child because “you need a boy.”
Daizy said that she will continue to promote and create awareness of the Pink Ladoo Project’s mission in Australia as she “loves the positivity around it”.
“You have to get passionate and you will spark change,” Daizy said. “You have to be discontent and willing to go against the flow to make a change.”