Kovind sworn in as Indian President, pledges to follow 'mantra' of Constitution 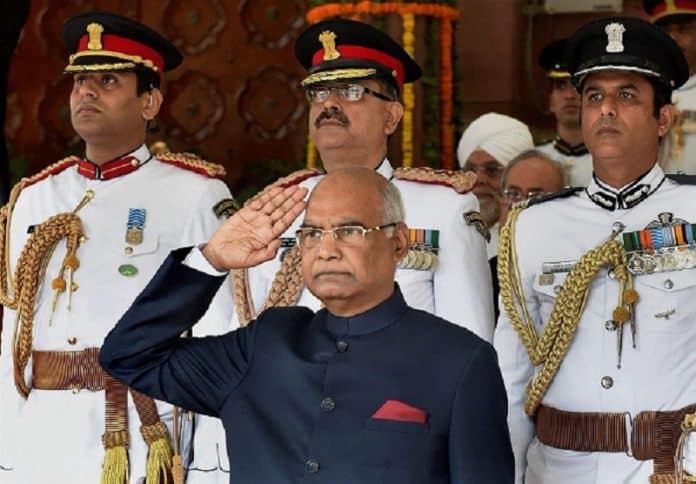 Reading Time: 4 minutesMaking history as the first occupant of Rashtrapati Bhavan from the BJP, President Ram Nath Kovind pledged to always follow the basic mantra of the Constitution to ensure justice, liberty, equality and fraternity.

Elected to the highest constitutional office last week, Kovind was administered the oath of office by Chief Justice of India J.S. Khehar at a brief but glittering ceremony in the Central Hall of Parliament before a gathering of MPs, Chief Ministers and diplomats.
Taking oath in the name of God, Kovind pledged to “preserve, protect and defend the Constitution and the law” and devoted himself to the services and well-being of the people of India.
Prime Minister Narendra Modi, ministers, opposition leaders including Sonia Gandhi and former Prime Ministers Manmohan Singh and H.D. Deve Gowda attended the event.
At the end of over three hours of protocol and formalities on a rain-marred day, the new President accompanied his predecessor Pranab Mukherjee to the latter’s new abode — 10 Rajaji Marg — after his warm farewell at the Rashtrapati Bhavan.

Photos of #PresidentKovind at the inter-services Guard of Honour in the Forecourt of Rashtrapati Bhavan pic.twitter.com/Y2jJ7shCfF

In his speech, Kovind hailed the vision of Mahatma Gandhi and Sangh icon Deen Dayal Upadhyay and said there was a need to build India as “an economic leader as well as moral exemplar”.
“For us, those two touchstones can never be separate. They are and must forever be linked.”
Recalling his humble beginnings from growing up in a mud house in an Uttar Pradesh village, Kovind said he has had a long journey.
“Yet this journey is hardly mine alone. It is so telling of our nation and our society also. For all its problems, it follows that basic mantra given to us in the Preamble to the Constitution – ensuring justice, liberty, equality and fraternity and I will always continue to follow this basic mantra.”

In another line that avoided any reference to Congress occupants of the Rashtrapati Bhavan barring two, Kovind said he was conscious he was following the footsteps of stalwarts such as Rajendra Prasad, S. Radhakrishnan, A.P.J. Abdul Kalam and his predecessor Pranab Mukherjee.
Referring to Mahatma Gandhi, Sardar Patel and Constitution’s architect B.R. Ambedkar, the President said these leaders did not believe that political freedom was enough; it was crucial to also achieve economic and social freedom for millions.
“The key to India’s success is its diversity. Our diversity is the core that makes us so unique. In this land we find a mix of states and regions, religions, languages, cultures, lifestyles and much more. We are so different and yet so similar and united.”
21st century India will be in conformity with its ancient values and compliant with the fourth industrial revolution, he said.
“There is no dichotomy there, no question of choice. We must combine tradition and technology, the wisdom of an age-old Bharat and the science of a contemporary India.”
He said as the gram panchayat must determine India’s consultative and community-based problem solving, “the Digital Republic must help leapfrog developmental milestones”.
But nations were not built by governments alone.
The government can at best be a facilitator and a trigger for society’s innate entrepreneurial and creative instincts. Nation building requires national pride.
“We take pride in the soil and water of India. We take pride in the diversity, religious harmony and inclusive ethos of India. We take pride in the culture, heritage and spirituality of India. We take pride in our fellow citizens.”
Saying each citizen was a custodian of India’s well-being, Kovind said the armed forces that protect the borders were nation builders.
So were police and paramilitary forces that fight terrorism and crime as well as farmers, scientists, nurses, doctors, entrepreneurs and artisans.
India believed in the principle of one world.
“It is appropriate that the land of Lord Buddha should lead the world in its search for peace, tranquility and ecological balance. India’s voice counts in today’s world. The entire planet is drawn to Indian culture and soft power.
“The global community looks to us for solutions to international problems – whether terrorism, money laundering or climate change. In a globalized world, our responsibilities are also global.”
He said India had achieved a lot as a nation but the effort to do more, to do better and to do faster should be relentless.
“What must also bother us is our ability to enhance access and opportunity for the last person and the last girl-child from an under-privileged family, if I may put it so, in the last house in the last village. This must include a quick and affordable justice delivery system.”
Kovind said people needed “to sculpt a robust, high growth economy, an educated, ethical and shared community, and an egalitarian society, as envisioned by Mahatma Gandhi and Deen Dayal Upadhyay.
“These are integral to our sense of humanism. This is the India of our dreams, an India that will provide equality of opportunities. This will be the India of the 21st century,” he said, in an apparent reference to Upadhyay’s principle of integral humanism.

Ram Nath Kovind’s entry into the cyber world as the 14th President of India was swift and seamless — garnering over three million followers within hours of debuting on Twitter.
“Honoured to be sworn in as the 14th President of India; would be carrying out my responsibilities with all humility #PresidentKovind,” said the Twitter handle of Kovind @rashtrapatibhvn even as he was completing the mandatory constitutional oath of office in the Central Hall of Parliament in New Delhi.
-IANS