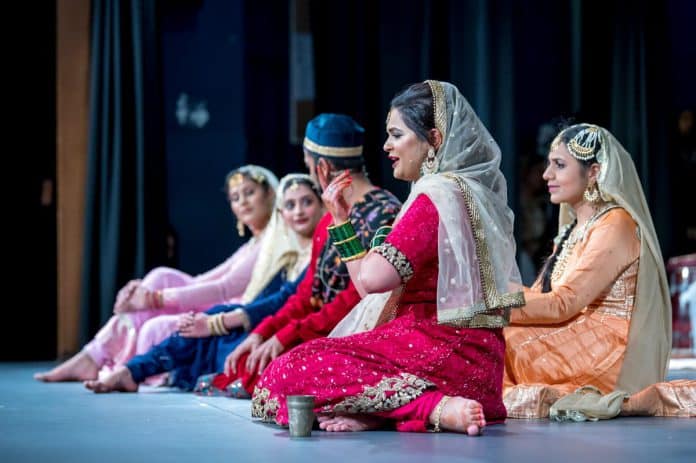 A cauldron of delights brewing a famous tale, managed to cast spells on the full house that attended Khelaiya Productions’ latest musical Umrao Jaan Ada.
The play presented a gleaming revival of Mirza Mohammad Hadi Rusva’s Urdu Novel based on a famous courtesan from 19th century Lucknow.
If you steer clear of comparisons with the all-time classic movie Umrao Jaan starring the stunning Rekha, and its flop remake, this well-constructed piece of theatre stood the test of time.

The freshness and seamlessness of the narrative was handled expertly by Director Harsiddhi Mody and executed brilliantly by local artists. It was hard not to be swept up in the theatrical magic conjured by those on stage.
Umrao Jaan (played by Girija Pandit) is a young girl who is kidnapped and sold to a brothel to be groomed as a courtesan (tawaif). As she matures, she becomes renowned for her beauty, singing and poetry gaining many admirers.
She falls in love with the wealthy and handsome Nawab Sultan (Rishi Kanojia) but circumstances force them away from each other. She then couples up with Faiz Ali (Ali Reshmwala) who showers her with gifts and attention. She elopes with him to discover that he is a dacoit and is wanted for his crimes.
Faiz is captured and killed by the local King’s men and Umrao is taken to the king’s court. There she meets her childhood friend Bismillah who helps her escape. She flees to Kanpur where she sets up her own kotha and continues to make a living through her performances.
In Kanpur, she comes across Ramdei – another girl who she had met briefly when they were kidnapped as young girls. Ramdei was sold to another benefactor. Umrao realises that, by a twist of fate, Ramdei is the woman who her lover Nawab Sultan ended up marrying.

She is convinced to return to Lucknow by her friend Gauhar Mirza (Abhijit Sahastrabuddhe) and foster mother Hussaini (Shanti Calpakam) and is duped into a false marriage to Gauhar Mirza. Umrao is heartbroken at the deception and gives Gauhar all her savings and asks him to leave.
This is when the British begin their rule in India and dethrone the Nawabs, resulting in the closure of many kothas. Umrao and other courtesans are forced to flee Lucknow.
Umrao seeks refuge in the small town of Faizabad, where she becomes a famous tawaif. She is reunited with her mother in Faizabad, but her brother disowns her. Rejected by family and dejected in love, the hapless Umrao lives her remaining days in Lucknow.
Girija plays Umrao beautifully, teetering on the edge of high drama and heartbreak with a distinctively melodious, ever yearning voice. Her talent is the heart of the entire show and most crucially, her singing. She delights on both counts.

Rachna Gupta as Khanum Jaan proves to be a formidable mix of a loving and intimidating personality and gets deep into the skin of her character. Abhijit as Gauhar Mirza brings some lightness to the tragedy. The rest of the cast complement the lead actress very well.
Gopal Ganwani, as the anchor, threads the story together skilfully. Deepak Joshi as the Moulavi Saheb who mentors Umrao, looks the part and is interesting in his own right.
The talented musicians carry the plot forward, enhancing the complexity that the audience is visually witnessing. The Kathak dancers enrich the audience’s experience of the world of courtesans as it was then. The sets are simple and the costumes are passable, although not historical.

The vocals were superior and the rendition of Amir Khusro’s Zihaal-e-Miskin sung by Suneel Chalisgaonkar and Atul Fotedar truly elevated the spirit. The occasional lapses in the enunciation of Urdu during the play, can be easily overlooked, as the effort in getting it right was clearly visible.
The first half goes slowly and then everything suddenly ramps up in the second half, giving it a slightly rushed feel. However, the audience is drawn into this story of love and struggle that is immersed in opulent culture with traditional ghazals, thumris and qawalis.
For Harsiddhi, recreating this epic tale had always been a cherished dream and she was delighted that the six months of rehearsals resulted in an overall performance of intensity, nuance and rigour. On popular demand, she will be presenting another show of Umrao Jaan Ada in October this year.