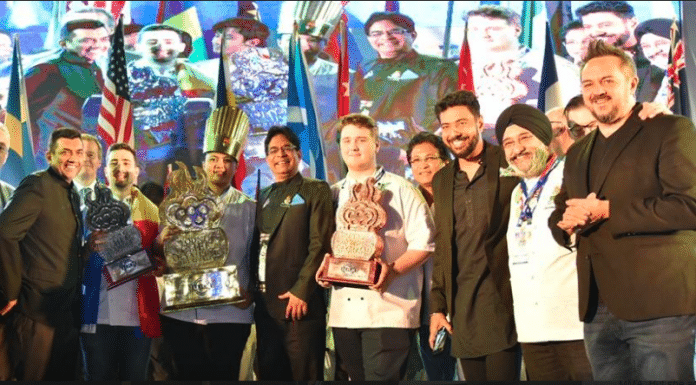 The 6th International Young Chef Olympiad (YCO), recently held in India, witnessed participation from over 50 countries and jury members from different nations. Among them were Professor David Foskett and Chef Brian Turner from the UK.

Previously the Dean and Head of the London School of Hospitality and Tourism at the University of West London, Foskett is a member of The Royal Academy of Culinary Arts, Craft Guild of Chefs and a Fellow of the Institute of Hospitality.

In June 2002 in the Queen’s birthday honours list, Turner was awarded a CBE for his services to tourism and training in the catering industry. Since then Turner has been made an Honourary Professor of The University of West London, a Fellow of the City and Guilds of London Institute as well as receiving Honorary Doctorates of Science at Leeds Metropolitan and Sheffield Hallam Universities.

We have got the conversation with both the experts to learn about their views on Indian food and how Indian cuisine is perceived abroad. Excerpts:

Have you ever been to India?

Foskett: Yes! I’ve been to India many times before. I love the vegetarian food; I like the colour and most importantly the Indian hospitality. Hospitality is in the DNA of Indian people and I think that India is the most hospitable country in the world.

How is Indian food perceived abroad?

Foskett: Indian food is perceived as one of the best food cultures in the world. I come from the United Kingdom where the most favoured dish is curry, which comes from India. Indian food is everywhere in the UK and curry has become like our national dish.

How do you see Indian food placed on a global platter?

Foskett: Interestingly, the use of spices has some major healing properties. There’s a huge movement in the US and now in the UK on culinary medicine, which majorly derives its inspiration from Indian Ayurveda and spices.

Turner: I think from a global point of view, Indian food has shot through the roof. UK has always had a very strong following of Indian food, but what has happened now is that it’s a lot more authentic. About 20-30 years ago in the UK, Indian food was available very much in a westernized version. But now that people are travelling more, they understand what proper cuisine is from different parts of India and they understand what great Dals are, what great curries are. The authenticity is changing and it’s spreading through the US, Australia, New Zealand, South Africa and it’s really becoming popular.

In your experience as a chef, what are the three most important attributes to be exhibited while in the kitchen?

Turner: Determination; you can’t do a lot without determination. Passion; it’s a widely used phrase in hospitality about being passionate but if you don’t love what you do, you cannot really excel in it. And commitment; it doesn’t happen overnight, you’ve got to commit time to being a chef. Those are the three key things.

What are the three most important ingredients in your kitchen?

Turner: I like to experiment with different cuisines. I like a lot of the Indian spices and also like to use and blends of those. Turmeric is used, Saffron is used in a lot of my cuisines and also the Garam Masala. I’ve been able to use that in different ways apart from the typical ways.

Which is your favourite cuisine and why?

Foskett: Indian vegetarian cuisine is the best and the most flavoursome in the world.

Turner: Indian cuisine done properly is one of my favourites. Thai is also close up there and there’s a connection between the two over some of the spices as well. I think Indian and Thai are the most interesting and versatile.

Do you think it is important to experiment with cuisines? How important is it to maintain the authenticity of any cuisine?

Turner: I think it’s extremely important. There are people who modernize and do different versions of cuisines and it’s happening here in India as well. But as long as they stay true to their roots, there’s nothing wrong with modernising presentations and putting a slight twist on something. But when you do too much, that takes it away from the real root of what that dish is and you’re starting to ruin it. You must never forget where the history of that dish comes from and the authenticity of it.

Cooking as a profession is now taken seriously unlike few years back. What do think has driven this change?

Foskett: We must see cookery as a profession and as a business. If you see the science and art of professional cookery as a business opportunity, then it is a very credible subject. People have now realised that running a business around food and creativity is important and entrepreneurs have found great satisfaction in hospitality and culinary business.

Turner: I think there are a lot of chefs on TV now and that has attracted a lot of people. I also think when you are creative, it is a great career to get into and to be able to be creative in. You can work in some fantastic establishments; you never go hungry, which is always good. It gives you some great opportunities; I have lived abroad for 21 years and worked in Europe, South Africa and SouthEast Asia. Giving you the ability to travel with your job and to try different cuisines is really exciting.

Sustainability was the theme this year at YMO? Tell us more about it.

Foskett: The previous successful editions of the Young Chef Olympiad weren’t based on a theme. This year, the competition adopted the theme’ as today, the world is very conscious of issues like sustainability. The young people have a voice on how the planet is suffering from climate change and what should be done. This is the reason why the need for a theme was felt.

Turner: Sustainability is something that is really close to my heart and it’s really important to ensure that we don’t waste food, that we respect food, we ensure that the element of packaging and traceability and also transporting your food and remember to use more local food. Although it is an international competition, I think it has a really strong message to send back to the colleges, back to the countries to say, this is something that hospitality can really start to affect and change.