What Sydney can learn from Delhi 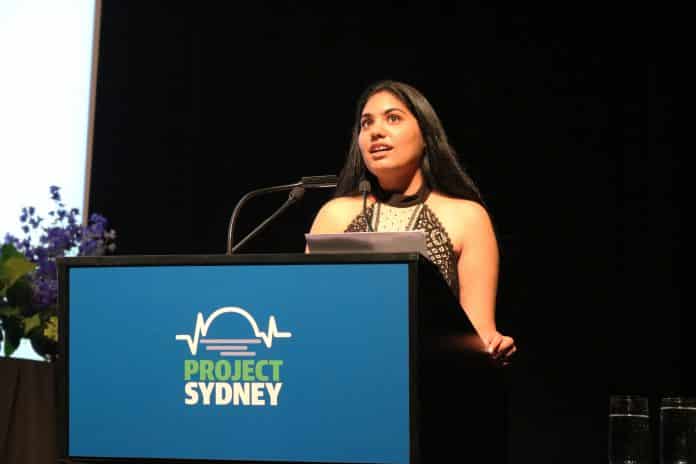 Reading Time: 3 minutesLooking back at life in Delhi from where she moved only four years ago, Kavya Nagpal remembers two things. One, the very strong sense of community in her neighbourhood, and two, the traffic chaos that ensued almost every day.
In a university contest recently, she used both these facets of Delhi life to create her vision for Sydney’s future as a global city, and walked away with the top prize. A first-year Economics/Law student, Kavya Nagpal of the University of Sydney has won the Lendlease Bradfield Urbanisation Scholarship, earning up to $50,000 for her work in urban planning.


The Scholarship, open to Sydney University’s Faculty of Arts and Social Sciences, Faculty of Engineering and Information Technology, School of Architecture, Design and Planning, and Business School, requires first- and second-year students at the institution to write an essay on ‘What does success to Sydney’s future as a global city look like to you? What is the greatest obstacle to achieving that success and how would you overcome it?’
Kavya’s two-fold response involved Urban Design and Urban Planning: the development of high-rise building models enveloped by curved balcony edges and hosting communal green spaces, as well as the development of a mini-city or a ‘micropolis’, which has all amenities and services to be located within a walkable distance.

Inspired by American architect Jeanne Gang, who is known for designs that nurture relationships between individuals, communities and environments, Kavya proposed a plan for a Sydney “that is actively involved in ‘relationship building’, a city that has inclusive living spaces that foster meaningful social relationships.”
Speaking to Indian Link, she described, “My urban design measures are aimed at improving community health and combating the problem of loneliness. I developed a high-rise building model based on Jeanne Gang’s Aqua Tower that is enveloped by curved balconies and ‘balcyards’ or balconies that cover grassed areas. Such features allow for a more favourable environment for socialising and fosters a sense of neighbourhood – something that is pretty hard to achieve in vertical development.”
Also integral to Kavya’s model is urban planning, i.e., the construction of ‘micropolises’ across Central and Western Sydney – multi-use areas that consist of residential high-rises, vertical farms, community centres and commercial and public-services buildings within a 2-3km radius. A key feature of the ‘micropolis’ is low speed internal roads, of around 15 km/h, to encourage walking and cycling and encourage greater outdoor activity, while mainstream traffic is diverted to external arterial roads.
“Not only will this reduce congestion, it will also generate greater small business activity (because when people walk, they tend to interact with local business to a greater extent), and facilitate community engagement through social activities such as parades and festivals. More walkable streets also open up higher density areas to a wider demographic of users such as families with young children and elderly Australians who would otherwise prefer quieter suburbs because the streets there are safer to walk on.”

She pointed out, “Implementing urban planning measures to improve walkability have delivered these outcomes in other cities around the world. For instance the ‘superblock’ concept in Barcelona has allowed for the development of wider sidewalks and more street furniture as well as reducing traffic congestion.”

Kavya was awarded the scholarship at the university’s Bradfield Oration attended by the Prime Minister of Australia Scott Morrison, NSW Premier Gladys Berejiklian, and more than 200 leaders of business, government and infrastructure.
In awarding the scholarship, Lendlease Chief Executive Officer of Property Australia Kylie Rampa said, “Kavya has developed an approach requiring us to rethink our relationship to the built environment – where buildings not only provide shelter but one where their role in creating broader social and cultural ecosystems is also considered.”
What does Kavya think about the popular notion that cutting immigration will reduce congestion? “I heard the Prime Minister speak at the Bradfield Oration about his concerns for growing immigration causing congestion. Now, to be fair, I haven’t looked into the nitty-gritty of it all but I believe that Sydney’s congestion can be managed through the implementation of planning measures regardless of our immigration numbers. Reducing traffic congestion is as much about current population policy as it is about using planning measures to future-proof our cities. The approach in Barcelona is an example of such a planning measure – making sure that streets are walkable automatically reduces car use. Maybe it’s time we realised that it’s not so much about making more roads as it is about reducing the number of cars on our roads.”
Photos: The University of Sydney