Karunanidhi: A colossus in Dravidian politics

An obituary of Kalaignar who passed away yesterday at the age of 94, by V. Jagannathan 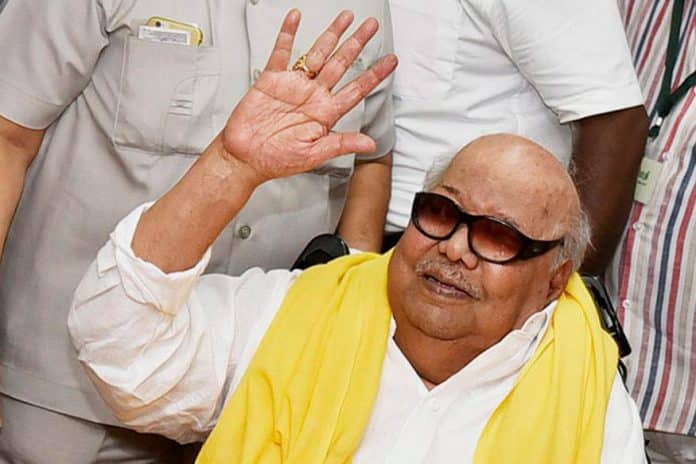 Reading Time: 4 minutesMuthuvel Karunanidhi was one of the last links to the Dravidian movement that ushered in the rise of backward classes in politics and the end of Congress rule in Tamil Nadu five decades ago on the plank of social justice.
A five-time Chief Minister, the 94-year-old, who strode the public life of Tamil Nadu like a colossus, also played a key role in national politics when he aligned with Indira Gandhi in 1971 and reaped rich rewards in elections. But he staunchly opposed the Emergency of 1975-77 during which his government was dismissed on corruption charges. He was banished to the opposition ranks till the death of his friend-turned-foe and iconic film hero M.G. Ramachandran or MGR in December 1987.

Under Karunanidhi, the DMK occupied a prime position in the UPA governments at the Centre in 2004 and 2009 and earlier in the NDA government under Atal Bihari Vajpyee, an alignment that surprised many given the party’s Dravidian moorings.
He was a wily politician who succeeded his mentor C.N. Annadurai or ‘Anna’ as Chief Minister in 1969 and kept a stranglehold on the party and government. He remained the President of the DMK for nearly 50 years, a rare feat in any democratic country. He always sported dark glasses, which became his trademark identity, and in later years a yellow stole, which critics said was against the atheism he preached.
With the death of his arch rival J. Jayalalithaa in 2016 and his departure now, Tamil Nadu is left with a void. Born in Tirukkuvalai in the erstwhile Thanjavur district on June 3, 1924, Karunanidhi was a multifaceted personality — journalist, playwright, script writer — whose fiery dialogues as an iconoclast in films unleashed changes in Tamil Nadu’s social scene.
He joined the Dravidian movement as a teenager under the tutelage of the late social reformer ‘Periyar’ E.V. Ramasamy and Anna. ‘Kalaignar’, as Karunanidhi was called for his proficiency in arts and literature, fashioned theatre and cinema in a way that gave a fillip to the Dravidian movement and the rise of DMK as a major pole in Tamil Nadu.
His political fortunes rose when Anna broke away from the DK to float the DMK in 1949. The box office hit of Tamil movie Parasakthi for which he wrote the script and a rail roko agitation in Kallakudi near Tiruchirapalli made him known throughout the state.

He ascended to the DMK throne and the Chief Ministership following the death of party founder Annadurai in 1969. Karunanidhi had the party in his strong grip till the end despite presiding over two major splits and being out of power continuously between 1977 and 1989. Born in a poor Isai Vellalar (a backward caste) family, he was named Dakshinamurthy by his god-fearing parents Muthuvel and Anjugam. He later changed that to Karunanidhi, a Tamil name shorn of any Brahminical or Sanskrit tinge.

He also took part in the anti-Hindi agitations of 1937-40 and published a handwritten newspaper Manavar Nesan (Friend of Students) and later formed the first student wing of the Dravidian movement, Tamil Nadu Manavar Mandram. The anti-Hindi agitation was revived by the DMK in 1965, leading to massive anti-Congress sentiments amid much violence.
Karunanidhi also published Murasoli, a monthly which grew to become a weekly and the DMK’s official daily. Last year it celebrated its platinum jubilee. He contested his first Assembly election in 1957 from Kulithalai successfully and since then never lost any of the 13 elections he contested. He gained further strength when the DMK won the 1967 elections and Annadurai made Karunanidhi the Minister of Public Works.
After Anna’s death in 1969, Karunanidhi became the Chief Minister. He led the DMK to a landslide win in 1971. Bad times started soon after. Perceiving the popularity of movie hero and party leader MGR as a future threat to him, Karunanidhi began sidelining him and ousted him in 1972. MGR floated the AIADMK that took power in 1977. He cultivated the Congress well — sharing liberally the Lok Sabha seats while retaining his hold on the Assembly — to effectively consign the DMK to the opposition benches.
But DMK revived in 1989 when it won handsomely assisted by a split in AIADMK, with one faction led by its founder’s widow Janaki Ramachandran and the other by Jayalalithaa. However, in 1991, the DMK government was dismissed in the wake of heightened activities in Tamil Nadu of Sri Lankan Tamil Tigers whose vocal supporter he was. After Rajiv Gandhi’s assassination by a LTTE suicide bomber in May 1991, the AIADMK under Jayalalithaa swept to power.
https://twitter.com/MrIanMalcolm/status/1027005209073999872
The DMK suffered a second split in 1993 when Karunanidhi saw fiery speaker Vaiko as a threat to his son M.K. Stalin’s ascendancy in the party and expelled him. After that it was a see-saw battle with people choosing DMK and AIADMK alternatively. In 2006, the DMK was voted back to power for its populist promises. In 2011 Karunanidhi promised more, but the DMK lost the battle. In 2016, too, it suffered the same fate.
A staunch opponent of Congress and its dynastic rule during earlier days, Karunanidhi later changed tact and paved the way for his progenies’ progress within and outside the party. He brought his sons — through his second wife Dayalu – M.K. Alagiri and M.K.Stalin — into the party. Alagiri became Union Minister while Stalin was declared the political heir. However, Alagiri was dismissed from the party later for anti-party activities.
Karunanidhi made Kanimozhi, his daughter by his third wife Rajathi, a Rajya Sabha member. After the death of Murasoli Maran, his nephew, conscience keeper and the party’s face in Delhi, Karunanidhi got the former’s second son Dayanidhi Maran a Cabinet post in the central ministry in 2004 and 2009. With coalitions becoming the norm at the Centre, the DMK started siding with BJP and Congress to get cabinet berths. It was the Sarkaria Commission which first stamped Karunanidhi as corrupt in the matter of allotting tenders for the old Veeranam water project.
Though Karunanidhi was jailed several times during his long political innings, what shocked many was his midnight arrest by the Jayalalithaa regime in 2001 on corruption charges. His wife Dayalu and daughter Kaimozhi were questioned by the CBI over corruption charges. When the Sethusamudram Canal Project got mired in controversy, Karunanidhi shocked the nation by wondering aloud whether Lord Rama was an engineer to build bridge across the sea.
Karunanidhi donated his home in Gopalapuram to a trust to convert it into a hospital for poor after his and his wife Dayalu’s lifetime. He is survived by his two wives Dayalu and Rajathi, sons M.K. Muthu, Alagiri, Stalin and M.K. Tamilarasu and daughters S. Selvi and Kanimozhi and grandchildren.