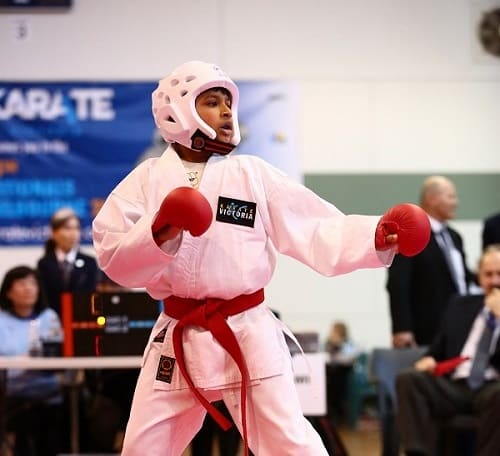 Reading Time: 3 minutesIt’s not often that a child of Indian origin, who excels at school, also goes on to represent Australia in sport; but then, Mark Brian Mario Misquitta is no ordinary kid.

Not only has Mark represented Australia in karate at the tender age of 12 years, he also competes in maths at the national level, is gaining proficiency in piano and is an avid reader.
Mark has links to India, Goa, with his father Ashley Misquitta, hailing from Aldona in North Goa and mum Natasha Misquitta nee Andrade, tracing her roots to Velim South Goa.
Mark was introduced to karate at the tender age of six and attained his black belt barely five years later. He excelled in competitions (Kumite, fighting) over the last few years and ranked fourth in Victoria last year.
He was selected to represent Victoria and at the Nationals in Melbourne last year, Mark won silver and was ranked number two in Australia. Early this year, Mark also won silver at the Victorian State Championship.

Recognising his outstanding achievements, Mark was invited to train with the Australian squad this year. At the national camp in Sydney, Mark demonstrated a high level of physical and mental aptitude along with explosive skills. This impressed all national coaches and he was selected to represent Australia.
Mark’s first international competition representing Australia was in New Caledonia in July for the Pacific Cup.
“Normally at the elite level, competitions have age and weight categories. However this competition had an open weight division and I was expected to fight some giants in the sport.
My division had one of the largest group of competitors,” Mark told Indian Link.
He placed fourth in his first international competition, which saw a lot of injuries due to the open weight division.
At the three-day camp in New Caledonia prior to the Pacific Cup, Mark had the opportunity to train with world champions from France, Japan, Australia and Netherlands, who were flown in to train the Australian team.
Besides inspiring Mark to train with the greats, it has given him valuable experience as he continues on the international karate circuit.
Incidentally, karate is only one of Mark’s varied success stories.
Mark attends a private school in Melbourne, where he was selected to represent the school at the Australian Mathematics competition. Only the top six were selected from the 252 students in his year level. Mark regularly achieves “A” scores in his studies.
“I love to relax by playing piano, and I have also completed grade two in piano,” Mark revealed. “On the odd occasion when I have some free time, I love swimming in the pool, catching up with friends, playing video games and reading.”
Mark’s family, relatives and friends are not only proud of his achievements, courage and persistence, but also admire him for his humility.
“His own karate club class mates didn’t even know he was representing Australia until the club instructors announced it,” said his sister Alison.