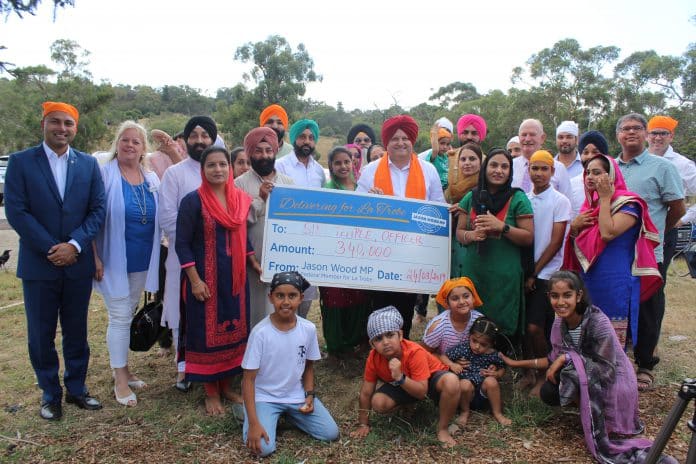 Reading Time: 3 minutesJason Wood, Federal MP for Latrobe recently announced $340,000 dollars for Siri Guru Nanak Darbar Sikh Temple in Officer. The Federal funding came as a welcome boost for the south eastern Sikh community.
This funding is to be invested in community-focussed projects that will include a kids’ language school, play area, organic farming and rainwater harvesting. The funding was in response to a proposal from the Temple that was supported by a petition from 665 community members.

Jason Wood said that the proposal was professionally presented and he was confident that these projects would promote community harmony and social cohesion.
He also commended the Officer Gurudwara community for forging relationships with the larger community by promoting Sikh values and through collaborations with local organisations.
The announcement was made at a special event that was held inside the newly built Gurudwara premises. The Minister was accompanied by many dignitaries that included Brad Battin, State MP Gembrook; Mayor Graeme Moore, Cardinia Shire Council; Mayor Amanda Stapledon, Casey Council and Cr Damien Rosario, Casey Council.
Since its official opening in January 2019 the Gurudwara has catered to the Sikh community residing in South Eastern suburbs. A special congregation is held on Thursday evenings and Sunday morning of every week to offer prayers, meditate and partake of free langar (community meal). The Gurudwara is open to all and has the capacity to seat around 200.

According to Harpreet Kandra, one of the active volunteers at the temple, this recent funding as well as a generous donation of $170,000 by Jatinder Singh Uppal adds up to $510,000 dollars that would be utilised towards Gurudwara facilities, projects, community events and collaborations.
Harpreet, who recently received the Cardinia Council Citizen of the Year award, spoke about the various initiatives that the Officer Gurudwara community has been involved with since its inception.
“The unique thing about this Gurudwara is that we have no committee and no designations, everybody is equally a sevadar (service volunteer)” he said.
According to Harpreet the Temple recently held special prayer sessions for victims of recent tragedies including the Bushfires in Bunyip, martyrdom of Indian soldiers in Kashmir and Christchurch mosque shootings.
He said that the Temple is also involved in projects like plantations drives, clothes bin collection for the needy and donation of bales for farmers facing drought in Victoria. The Temple also provided langar (meals) for BlazeAid a volunteer based organisation that has been working with families in Bunyip after the recent bushfires.

Harpreet referred to the concept of Dasvand that literally means “a tenth part” and refers to the act of donating ten percent of one’s harvest, both financial and in the form of time and service such as seva to the Gurdwara and anywhere else.
According to him this custom, outlined in the manual of Sikh conducts, has been adopted by the Officer Gurudwara and as a result 10% of the total amount collected through temple offerings is allocated towards the community.
The recent Federal funding will go a long way in helping the Gurudwara to reach, interact and engage with the community.