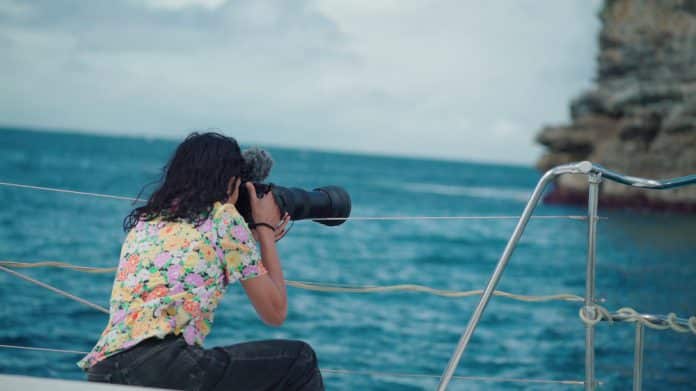 It is said that the danger of adventure is worth a thousand days of ease and comfort. It’s a philosophy that has long driven Divya Gordon, a videographer and producer who recently set sail on a three-month long expedition in the hope of finding and capturing some of Australia’s most remote marine locations. Exploring the most beautiful untouched parts of the region with a small group of adventurers and filmmakers, Divya’s escape into isolation has been equal parts dramatic and unlikely.

Divya describes hers as a “classic Indian story”, though over time it has rapidly transformed into one that is anything but typical. After graduating from Pymble Ladies College in Sydney’s north shore, where she excelled in visual arts, Divya was strongly encouraged by her father to study business at university. Despite aspiring to study political economics and arts, Divya followed her father’s advice to complete a commerce degree at UTS, and looks back on university as a ‘miserable’ affair. “It was the most unfulfilling thing ever having to study business and knowing it wasn’t me,” she says.

Starting out as a qualitative researcher, Divya admits it took some time to come to grips with her reality. “I really struggled in the corporate world when I was younger. I reached a point where I realised that this is my life, and this isn’t where I want my mind to develop. It was always niggling in the back of my mind that when I gain enough clout in [the business] world, I want to try and do something for myself”.

Divya’s dream became clear: to combine her penchant for creativity and adventure with her passion for altruism.

“I’m a little bit wild,” laughs Divya, an avid fan of extreme sports. “I don’t like working in an office 9 to 5. I like my autonomy and I much prefer the instability of that to having to go into an office every day.” It’s a creative streak that runs in the blood, with artists and musicians scattered across Divya’s extended family.

After an initial tilt at a new career in Spain in 2017 (which she now labels as a “terrible” idea), Divya returned to Sydney and began seeking volunteer work to further develop her photography and videography skills, including “eye-opening” experience with the Asylum Seeker Resource Centre. That cause was particularly close to Divya, whose grandparents on her mother’s side were Sindhi refugees during Partition in 1947.

As work started rolling in, Divya was soon supporting herself solely through her film and videography work, despite never studying it. “It’s a dynamic, amazing, constantly evolving industry,” she remarks. “It’s really subjective. The point is to have a mind that doesn’t just deal in business – I need to reframe my mind, exist in the world, take stimulus and just create. Film is really unique for that.”

Divya’s interest in film and her reputation for adventure led to an invitation that would change her life.

Enter Dean Cropp, an award-winning cinematographer and producer known as the Barefoot Captain, who has made a name capturing and producing ocean adventure content and whose videography skills Divya anoints as “unlike anyone else when it comes to shooting what he’s shooting”. Dean’s latest project is a three-month long sailing expedition following in the footsteps of his adventurer father, chasing the most remote marine locations and capturing every minute of the journey.

Divya was invited to join this expedition as a cameraperson and assistant editor on just two days’ notice. In a twist of fate, the invitation came as the impacts of the COVID-19 pandemic were beginning to ravage Divya’s upcoming videography jobs, with weddings, international conferences and other events being universally cancelled.

The prospect was three months at sea with scant food, bouts of seasickness, rolling cameras and poor sleep – all with six (mostly) strangers. It’s the stuff of nightmares to many, yet for Divya, who had never even dived before, it was a no-brainer.

“It was earth shattering, one of the most life-changing adventures you could ever imagine”, she says. “It’s incredible to have now swam with sharks and seals and stingrays, innumerable creatures. It’s a whole other world. Even at night, looking out at the stars and the water, it’s like you’re in the middle of the universe. You don’t know where the sky ends and the water begins.

“And the weightlessness of diving – just imagine walking through 3D space and gravity is suspended, and you can move in any direction. But it’s also terrifying, because anything can come up at you from any direction.” Divya and her crewmates experienced that terror when, while diving and shooting in open waters, they sighted a tiger shark, which later bit the back of the boat once they were back aboard.

A different kind of isolation

As the rest of Australia isolated at home, so did Divya and her crewmates, albeit adrift and alone at sea. While their isolation was idyllic in some ways, it came at a cost.

“There’s a sense of security I didn’t realise I was missing. We took turns being helmsmen [steering the boat]. We were doing early morning and late-night shifts, so sleep was always interrupted, and it turns into a bit of a nightmare. We also had to be frugal with our water usage. When I cooked curry everyone’s reaction was so bad – curry is great, but when you’re barely stomaching normal food, it’s not great! You get very sick, and seasickness makes you almost comatose for days.”

Divya notes, “There was a survival element to our isolation. We ran out of fresh food in the first two weeks, and we had frozen food, but that ran out in the last week, so we were down to just canned food. We also fished for fresh fish. That survival element bonds you to the people you’re around – you prove to yourself that you can go without, and that you can go a little bit further than other people go. It’s incredibly empowering and connecting”.

The things Divya missed most from solid ground? Fresh bananas (given the strict no bananas on board policy), and the ability to walk more than 10 metres in a straight line.

A sense of perspective

Divya reflects on her experience with an acute sense of self-awareness and perspective that often accompanies adventure, expressing particular gratitude to Dean Cropp, Wesley Nelson, Louis Piazz and The Story Mill. “I am so lucky. Being a freelancer is a struggle and honestly it still is, but experiences like this enrich me far more than money and a traditional career could. It’s been incredible to have this opportunity and create something out of it. Working with different kinds of camera angles, different types of cameras – it’s creation on the fly, you have to create a story and make something consumable.”

While Divya’s mother – a lawyer who Divya describes as “very creative” herself – has always been hugely supportive of Divya’s ambitions, Divya’s father has also started coming around on her career change. “I give Dad the best stories to share with his golf buddies,” laughs Divya. “He’s concerned for me and that’s where the struggle comes from. It’s about proving to him and to myself that I’m trying to be sensible in life, and that it’s going to be worthwhile. I know he’s proud.”

Divya concludes with some simple career advice: “Just back yourself. You have nothing to prove to anyone but yourself. You have to decide for yourself what you want to do with your 9 to 5, and if it’s not what you’re currently doing, move on and don’t look back”.