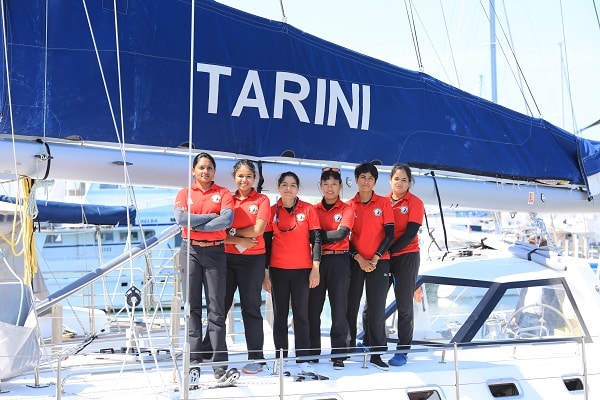 But the Navika Sagar Parikrama expedition faced one of its biggest potential setbacks when the INSV Tarini, during the journey home, developed a technical snag with the steering gear just 2,000 miles off Goa, according to Indian Navy chief, Admiral Sunil Lanba.
“The crew’s tenacity was again put to test when the boat developed a defect in the steering gear. They not only carried out temporary repairs in the middle of the ocean, but sailed the boat to the nearest port, Port Louis in Mauritius, 180 miles away.

“The grit and determination displayed by the young women officers will definitely encourage future generations to take on flaunting challenges and strive for success,” Lanba said at a function held at the INS Mandovi naval base near Panaji.
Earlier, team leader Lt Commander Vartika Joshi narrated how she and her crew of Lt Commanders Pratibha Jamwal and Swati P. and Lt Aishwarya Boddapati, S. Vijaya Devi and Payal Gupta encountered and surpassed challenges in the arduous journey which began in Goa in September last year.

“Near Falkland Islands in the Pacific Ocean, we encountered hurricane force winds off Cape Horn and eight metre waves and sub zero temperature,” she said, adding that during nights the winds picked up to frightening speeds of much as 60 knots.
The team encountered and was pleasantly surprised by tiger sharks, pilot whales as they sailed through the oceans of the world which Joshi described as “an extraordinarily adventurous voyage of our lifetimes”.
IANS