Indians stranded in Australia, expect to pay about $1800 to get back home

Indian nationals stranded in Australia will soon join 1.8 million compatriots who are now homebound in the Govt of India’s Vande Bharat Mission 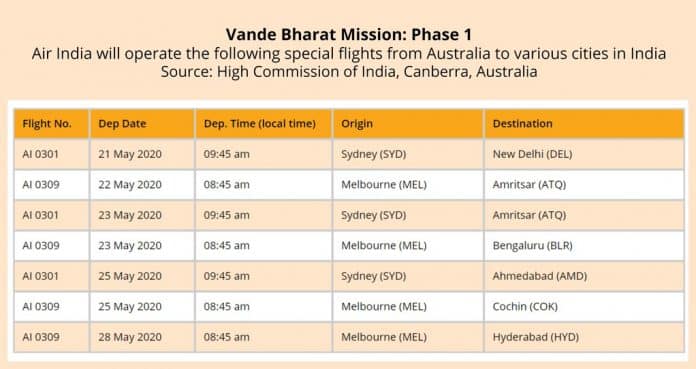 For thousands of Indian nationals stuck in Australia due to the Covid 19 lockdown, the Indian Link report that Air India will start phase one of its evacuations from 21 May was welcome news.

On a global basis, the evacuation of Indians trapped in various countries, being called Vande Bharat Mission, is being hailed as the world’s largest evacuation which will bring 1.8 million home.

Over the course of the last 24 hours, a number of queries have been raised by many people. We answer a few of these here, and suggest strongly that you follow up with the High Commission in Canberra and various Consulate offices around the country as they release more information.

Flight dates and schedules: In Phase 1, there are seven flights being confirmed – four from Melbourne and three from Sydney, over the course of a week. All will land in Delhi as the first stop. Two will then proceed to Amritsar, one each to Bangalore, Ahmedabad, Cochin and Hyderabad. Sydney and Melbourne are the two hubs where Air India has ground operations in Australia.

Fares: Fares are still being finalised  but are expected to be about $1,800 for a travelling passenger. Similar evacuation flights from the US to India were costed at Rs 1 lakh, Europe to India Rs 50,000, Singapore to India Rs 25,000. It is believed that those travellers who hold flight tickets for other Air India flights will be able to use those tickets for the evacuation flights but will need to pay more or get credit in fares, depending on the price of the original tickets and the evacuation fares. The final Australia India fares will be announced shortly.

Compulsory quarantine: Like for all travellers arriving back to Australia, the Indian nationals returning to India will have to undergo 14 days of quarantine. They are expected to quarantine at their final port of disembarkation in India. It is believed that they will be given a choice of hotels – from 3-star to 5-star and they can nominate, subject to availability. The cost of the quarantine will be borne by the passengers. The price range is expected to be about Rs 3,000 for a 3-star hotel to a 5 star like Taj, costing Rs 5,000 to Rs 6,000 plus taxes.

Process: The Indian High Commission has had on their website a form which all those wanting to be evacuated need to complete. This application due date was 10 May. It is unclear as to the process for those who have not yet registered as the form is not on their website. According to the Ministry of Home Affairs, priority for travel will be given to compelling cases in distress including migrant workers being laid off, short term visa holders facing expiry of their visas, pregnant women, the elderly, people with medical emergencies and those with bereavement or serious illness in their immediate family, apart from stranded tourists who need to travel back urgently.

Other cities of India: In Phase 1, the cities above have been nominated as destination hubs. Over time other hubs may open up but do note domestic air travel and airports are largely shut in India. There also need to be adequate quarantine facilities in each hub as hundreds of thousands of global Indian nationals arrive back in India.

In conclusion, all officials from the Ministry of External Affairs and Air India have stressed that the safety of the travelling passengers and Air India crew is the most important consideration in their planning.

Indian Link will report on more developments as they come to hand.