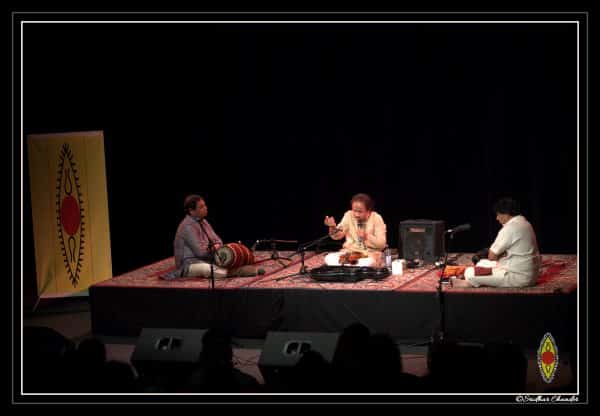 “Improvisation is the core of Indian classical traditions, and so was the case with Western classical for quite long before it paved the way for the rigid score-sheet based performances we see all around now,” Dr L Subramaniam said in Sydney recently. “While I acknowledge there are different artists imparting subtle differences in playing these pre-set compositions, imagine how wonderful the musical output would be if various talented artists all over the world are to present their improvised versions of cadenzas! The variety would fill this world with different flavours and colours of music. I yearn to be in such a world.”
As a practitioner of both classical schools, the Indian and the Western – both vastly different – the eminent scholar-composer, has crystallized a total of 36 basic scales which are amenable to microtone-based orchestral arrangements.
Dr. L. Subramaniam’s lecture on 3 Oct at the Australian Institute of Music (AIM) wonderfully engaged the students in an interactive session as he expounded the various aspects of music – principally from the Carnatic tradition.
He explained simultaneously in the equivalent Western classical terms, thereby establishing firmly the differences (microtones vs tempered) and the synergies (the orchestral concepts). His talk derived from his multi-decade long experience as a performer and composer whose works have been played by top symphony orchestras like the New York Philharmonic.
Arranged by SPIC MACAY Australia (the third event in the series for 2017), the lecture started with a brief history of Indian music,  through the monotonic chants in the times of the Rig Veda, its septatonic expansion in the times of Sama Veda, and its subsequent bifurcation (during the Mughal era) into the present distinct south and north Indian classical traditions.
He addressed the fundamental melodic and rhythmic concepts of the Carnatic tradition and how various scales – parent and derived – are created, giving rise to more than a million distinctive scales.  However, he noted repeatedly, playing the notes alone simply does not constitute a raga and that a raga is characterised by set of primary notes, secondary notes and microtones.  The microtones, he jocularly mentioned, could sound “out-of-tune” to ears trained in western classical, although they are very much reproducible frequencies which are essential and unique embellishments honed through oral traditions.
He deftly illustrated this using the raga Shankarabharanam, identifiable as a Major Scale in western classical. As he expounded on the rhythmic aspects, he explained different time-signatures and how 175 talas are derived from the constituent elements namely laghu, drutam and anudrutam. As he educated the audience in Indian scat singing, he encouraged them to repeat the vocalisation in different speeds. At the highest speed as he effortlessly vocalised them, the untrained audience, unable to reproduce, acknowledged their failing cheerfully with laughter and applause all around.
The rhythm segment also featured illustrations on mrudangam by DSR Murthy and morsing by Satya Sai.  Questions from the audience, such as comparison of violin with sarangi, were answered clearly. The maestro ended the lecture with a few tips to the younger generation for improving their bowing and fingering techniques.

The night before, his team of musicians along with his wife Kavita Krishnamurthy Subramaniam who is an eminent singer in her own right, had presented a beautiful concert at the Australian Maritime Museum. Kavita’s pick of songs (bhajans as well as Bollywood numbers) were followed by almost an hour of raga Abhogi played by Dr. L.Subramaniam with a grand finale of Carnatic Allegro, a Vahulabaranam Thillana, by the entire team.  The artists were brought down under by the Confluence Festival of India in Australia.