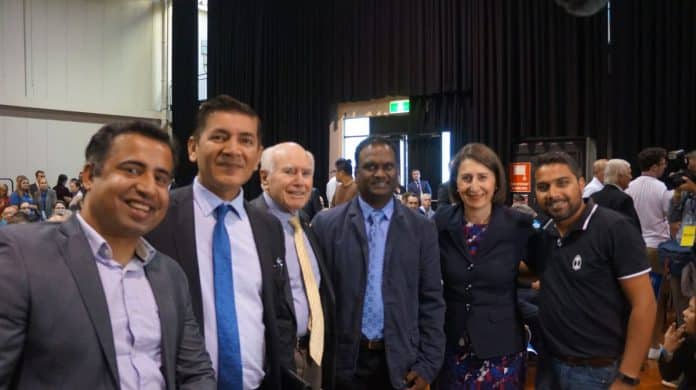 Reading Time: 3 minutesWe get to know one of the Indian-origin candidates in the 2019 Federal Elections fray – Vivek Singha, Liberal Party, McMahon NSW.
What convinced you to join the party of your choice?
I am passionate about science and technology and the ways it can transform human lives, particularly through medical advancements. The Morrison Liberal Government’s record investment being made in health with 2,000 additional medicines added to the Pharmaceutical Benefits Scheme and the nation’s first sports plan, Sport 2030, encourage active and healthy lifestyles. Record levels of health funding specifically, and the many other great Liberal initiatives along with a great leader in Scott Morrison convinced me to join the Liberal Party.
What are the three main changes you wish to make if you are to be elected?
As your Liberal candidate, I will stand up for people who work hard to get ahead and fight to help local families and small businesses get a fair go. As part of the Morrison Liberal team, I will protect our local quality of life and support local families reduce their cost of living pressures by supporting tax relief, improving access to childcare, and lowering power bills.

Tell us a bit about your background?
I am a first generation Australian, migrating from India 16 years ago as an overseas student, I live in Western Sydney with my wife and four children. I have undertaken studies in mechanical manufacturing engineering in India. Professionally, I have worked in manufacturing, consulting, tax and finance roles. My other passion is motorcycle riding and through this I have become involved in a variety of community and charity rides including Black Dog ride raising awareness of mental health, Pink Ribbon ride for breast cancer awareness and the MS Gong ride raising awareness for Multiple Sclerosis.
There is much disillusionment with politics and politicians in current times. What needs to be done to change that public perception?
While there has been disillusionment due to internal political challenges, both the Liberals and Labor have implemented structural changes to reduce churn in leadership. A healthy conflict is always good. With the recent global challenges in the world, New Zealand, SriLanka and the challenges faced by nations like the United Kingdom that were once ruling the world but are now struggling for their own independence, the youth have to realise how good they have it in Australia. Speaking to people in the shopping centres in Pemulwuy, Greystanes and Merrylands, it is very pleasantly surprising to hear the biggest concern – minor traffic related matters. The youth needs to realise the opportunities that we take for granted every day. We need to fight hard to protect these. For ourselves and the future generations, the choice is between a strong and secure government or a decade of ruin.
Australia is the best country in the world. This does not happen by accident: with the last quarter’s inflation figures out, the inflation was announced to be at 0%, giving us an indication of the state of the present economy.
Any special message for the voters?
To everyone, especially the readers of Indian Link, I can share a hundred great things, which can be summed up using 2 phrases: strong economy, secure future. Strong economy guarantees jobs and opportunity for all, and allows for spending on the projects that matter. As regards a secure future, almost 2,000 medicines are on PBS guaranteeing a secure medical future for all Australians. A secure future by the way of sensible and practical immigration, border protection and security and intelligence services ensure that people in Australia can live without worrying about their personal security too much. Coming from India and working in Delhi for 7 years, I personally am so appreciative of the opportunity to live in this beautiful nation. Let us work hard to keep Australia the best country in the world.