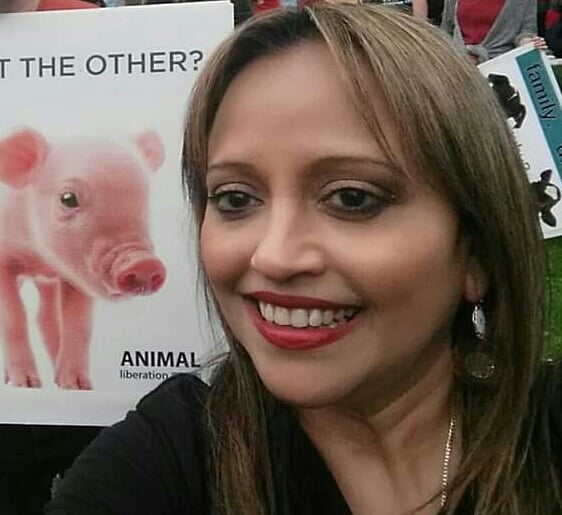 Reading Time: 3 minutesWe get to know one of the Indian-origin candidates in the fray in the 2019 Federal Elections – Vinita Costantino, Animal Justice Party, Deakin VIC.
What convinced you to join the party of your choice?
I joined the Animal Justice Party (AJP) as a way of reducing my despondency and immense distress when learning about the abhorrent cruelty animals are subjected to in too many “normalised” contexts. As a psychologist, I promote individual empowerment for good mental health, and given that our laws supported such abhorrent cruelty, I knew the most powerful way to effect change would be through the parliamentary system. Consequently, I joined the AJP and ran as their candidate for Croydon in the 2018 Victorian State Election.
What are the three main changes you wish to make if you are to be elected?
One, ban live exports. Two, end factory farming. Three, tackle all the causes of climate change.

Tell us a bit about your background?
Born in Lucknow (India), I migrated to Melbourne when I was five. I’ve lived in Croydon for approximately 20 years, and have operated a private psychology practice in Mooroolbark for 9 years. I’ve always felt a strong affinity with animals and inherently known their sentience makes them significantly like humans. Whilst I grew up consuming meat, I always experienced a dissonance about it, despite preferring vegetarian meals anyway (especially dhal and rice). Transitioning from vegetarianism, I’m now 100% vegan.
There is much disillusionment with politics and politicians in current times. What needs to be done to change that public perception?
Politicians need to stop treating each other as opponents, but rather as allies. Whilst varying parties may represent differing needs and values of the community, politicians need to work collaboratively to service the needs of the whole community. This cannot be achieved through disharmony and conflict, because such behaviour only serves to divide. We should all serve the same goal – to make Australia the best country it can be for all who live here.
Any special message for the voters?
When contemplating our coexistence with animals, we must respect their sentience. If an animal feels the same emotions that humans feel, surely humans can empathise with the terror they experience for weeks on a crowded ship in the searing heat and in excrement, amongst dead friends, or the sorrow sobbing dairy cows feel having their newborn babies stolen immediately after birth and slaughtered, or the horrific fear experienced in a slaughterhouse as their friends are slaughtered knowing they’re next. Consider this now – your empathy exists within the context of empowerment to fight for your rights, scream for help and defend yourselves. Animals have no such privilege. It is the mission of the Animal Justice Party (AJP) to remedy this.
We’ve lost our moral compass by only valuing human life. However, intelligent sentient life starts with animals and progresses to humans on the same scale. Yet human arrogance has arbitrarily chosen to only place value on humans despite us being half-way up the scale. Consequently, we’ve corrupted our moral code to the extent that even human life is being devalued due to the same arbitrary judgements based on race, religion, etc. To repair our moral compass, we need to start at the beginning of the scale of sentient life with animals, and value every sentient being on it.
Consequently, to vote 1 for the AJP is to vote 1 for the restoration of our moral compass.