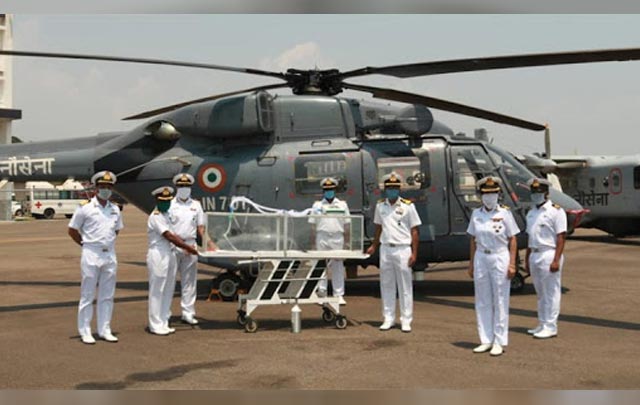 The Indian Navy has announced the design of a new ‘air evacuation pod’ that will be used to transfer coronavirus patients from remote areas, thereby reducing the risk of infecting the crew and the need for sanitisation of the aircraft post evacuation.

Created in the navy’s naval aircraft yard in Kochi, the pod costs Rs 50,000 to make compared to the Rs 59 lakh cost of importing such pieces. So far, the navy has transferred 12 units of the air evacuation pod to other commands.

The pod is made of aluminium, rubber and Perspex and weighs 32 kgs. Trials were held on board the Advance Light Helicopter and Dornier aircraft of Indian Navy in Kochi. The force also carried out a feasibility study for in-house modification to isolate the cockpit and cabin area and simulated airlifting of patients.
The Indian Navy has also designed and manufactured a ‘portable multi-feed oxygen manifold’ in Visakhapatnam.
“The entire setup uses an industrial 6-way radial header to enable one jumbo size oxygen bottle to supply oxygen to six patients concurrently,” the force said.
While five sets were handed over to the local administration, another twenty sets are planned to be progressively supplied within the next two weeks.