Gurpreet Chawla is a new Indian link at Valvoline Raceway 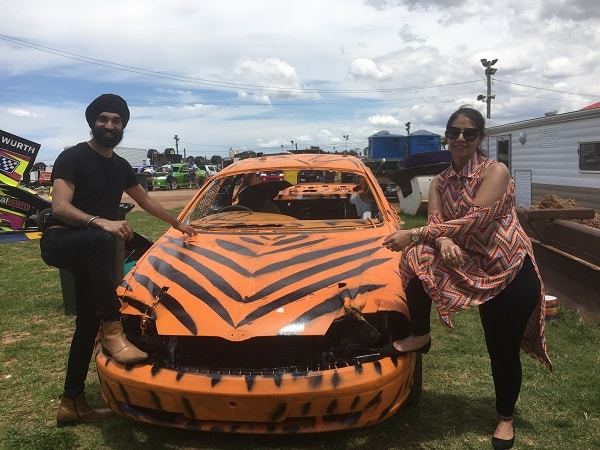 Reading Time: 3 minutesWhen Gurpreet felt the first jolt on his car, his immediate thoughts were of Anupreet, his wife, watching from the stands.
“I want her to know I’m alright!”

Shortly after, he saw another car, not far from him, topple over a full 360 degrees.
That driver was fine too.
As he took a second hit, Gurpreet knew it would all be ok, and the crashes would not impact him.
Sydney’s Gurpreet Singh Chawla was participating in the Demolition Derby at Parramatta’s Valvoline Raceway.
The engines roared and the crowds screamed as the hits came from every side. Of course he couldn’t hear the crowds thanks to that heavy-duty safety helmet, but when he got out of his car at the end, he saw them waving and cheering. He may have bowed out of the race early, but the TV cameras rushed to him and interviewers urged him to jump on top of what was left of his smashed-up car.
Not only was this Gurpreet’s first ever Demolition Derby, it was also the first time the speedway had had an Indian-origin competitor – in what is essentially a rugged Aussie sport.

“I felt like a star, even though it was not exactly the best of results,” Gurpreet, the Desi Daredevil, told Indian Link later.
It all began when Indian Link and Valvoline Raceway jointly launched a campaign to find an Indian participant for the event.
Wade Aunger of Valvoline Raceway had been considering reaching out to the Indian community. “There’s a very large community directly around the region that we don’t usually market to,” he told Indian Link. “As a family sport we’re keen to have Indian families come in and enjoy the cars and the fast-paced action.”
Gurpreet’s application stood out at first because of his background in adventure sports, and he later impressed with his can-do attitude. A daredevil at heart from early on, he has been attracted to all kinds of outdoor activity, including hitchhiking in the Jaisalmer desert in Rajasthan, dirt-biking in the Western Ghats, mountain-biking in the Himalayas, cross-country motorbike riding from Vizag to Mumbai, and snowboarding in Japan.

The adrenaline junkie also appeared on an Indian TV show called MTV He Ticket, in which participants indulge in extreme adventures. Gurpreet’s activity here involved off-roading in 4×4 vehicles.
Preparing for the event at Parramatta, Gurpreet got a good feel of the dirt track in a sprintcar – the high-powered ‘winged’ car that has a 1000 hp engine and reaches speeds of 150 km per hour.
For his actual stint in the Demolition Derby, the safety gear was provided for him, as was the car itself. He decided on an Indian theme for its look – and picked a tiger-stripe pattern (he has long been passionate about tiger conservation). His bride Anupreet and a team from Indian Link helped paint the car.

“Gurpreet was good fun,” revealed Wade Aunger, who helped prepare him for the event. “He’s very smart, and understood what was required of him. Enthusiastic and ready to give it a go, he was proactive in whatever he did.”
Mumbai boy Gurpreet moved to Australia in July this year. When he’s not pursuing an adrenaline rush, he works as a data analyst with the Australian Stock Exchange.
“The Demolition Derby was a whole new level of adventure,” he said. “The high-powered nature of it, alongside the sheer energy of the spectators, was simply exhilarating.”
He’s keen to get back on the speedway, probably in a sprintcar. Such is his enthusiasm that Anupreet might even join him – an adrenaline and gym junkie herself, she was fascinated with the women drivers on the night. But first, both are looking forward to get a feel of surfing.