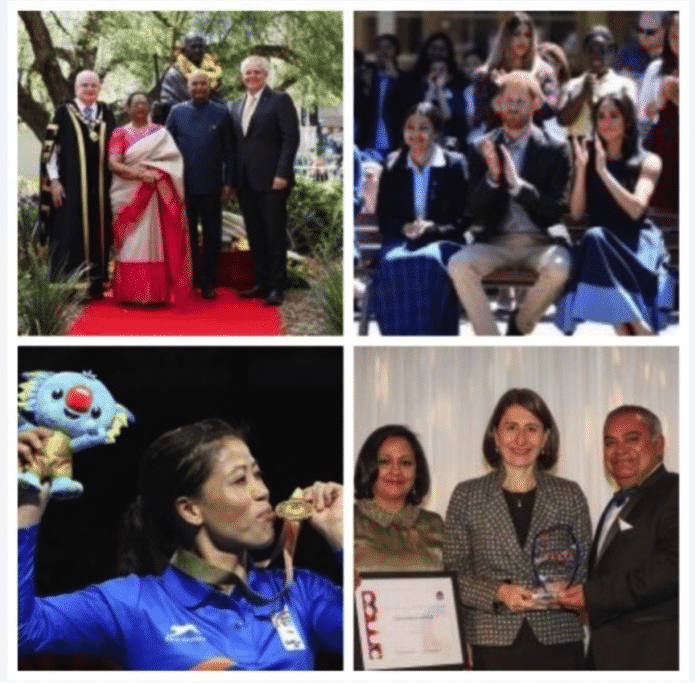 Our comprehensive wrap-up of the 2018 Commonwealth Games at Gold Coast which saw India finish in the top 3 with 66 medals
Indian Anzacs
RAJNI ANAND LUTHRA on Indian veterans’ call for a commemoration in India along the lines of ANZAC Day
Music as spirituality
RAJNI MADAN on Alan Posselt’s path of transformation from classical guitarist to sitarist
Media diversity: Walking the talk
VIRAT NEHRU on why repeat discussion panels about diversity achieve little
The Delaneys of Delhi

HAMIDA PARKAR on an Aussie family that calls a Delhi slum home
Having the last laugh
PREETI JABBAL on Indian comics at the Melbourne International Comedy Festival
Calling your inner Manto
CHARUTA JOSHI and RAJNI ANAND LUTHRA’s interview with Nandita Das, director of the film Manto which screened at the Sydney Film Festival

Winning pins and hearts
NEHA MALUDE’s interview with Sashi Chelliah, winner of MasterChef 2018
A little bit of your time

HARSHAD PANDHARIPANDE on the emotional and financial abuse faced by community seniors, and their pursuit of dignity in the face of it all
Practice makes perfectly imperfect
MOHAN DHALL on why constantly seeking perfection through practice is a deeply flawed idea
The FREEDOM issue
Our August issue for Independence Day: a photo-based feature on what ‘freedom’ means to us in our contemporary lives
Keep calm and curry on
MRIDULA NATH CHAKRABORTY’s tracing of the many narratives of the term ‘curry’ linked to identity, and the possible origin of the slur ‘curry muncher’
Masala and musings
PREETI JABBAL’s reports from the 2018 Indian Film Festival of Melbourne
The big wet
EMIE ROY on the lessons of resilience form a flood-ravaged Kerala
And the big dry


PAWAN LUTHRA’s interview with Dave Sharma, Liberal candidate in the high-profile by-election at Wentworth NSW
Drumming to his own beat
USHA RAMANUJAM ARVIND on musicologist Sam Evans, Australia’s first PhD on the tabla
It’s time to stand up, not stand by
ANEETA MENON on the power of bystanders to intervene in situations of domestic violence
Thinkers and linkers
Team members speak on the 25th anniversary of Indian Link
What I know about Diwali
Our feature on what the Festival of Lights might mean for non-Indians
Art of loving in tragedy
HAMIDA PARKAR on the fascinating story of an Indian painter, his Austrian wife and their Australian family
(Very) Special assembly

USHA RAMANUJAM ARVIND on Indian Link’s latest – and 22nd – multicultural media award
Editorials
PAWAN LUTHRA’s notes on contemporary issues such as the role of China in international politics; lessons from FIFA; India-Australia ties as affected by the political turmoil in Canberra; the diaspora serving as ambassadors for the birth country; women’s financial literacy; the need for greater diversity in our social discourse.
Expect the unexpected this summer
RITAM MITRA on the Indian cricket team’s chances ahead of the 2018-19 tour to Australia
The dawn of a new cricket era
RITAM MITRA on the transformative initiatives of the ICC that may well determine the future of one or more formats of the game
Good governance gone bad
RITAM MITRA on the one thing Australian and Indian cricket have in common: corporate governance failures
Jai ANZAC Jawan

RAJNI ANAND LUTHRA on Blacktown City Council’s ‘Light your homes for Diwali’ contest
String of pearls redux: Increased concern for India
LINDSAY HUGHES on China’s two proposed development initiatives in Thailand, which could have far-reaching consequences for India because the so-called ‘string of pearls’ would then completely encircle it
President comes calling

Our comprehensive coverage of the Australian visit of the President of India, Ram Nath Kovind
The stuff of dreams
MUNISH DAVID on the high school kids – up and coming cricketers – who got to bowl to the Indian cricket team’s greats in the nets at the SCG
Flushing their worries away
PREETI JABBAL on Mark Balla, a Melbourne social entrepreneur who is building basic facilities in rural India, to help keep girls at school
Singing to his own tune
MANAN LUTHRA on Year 12 student Kiran Gupta, who topped the state in HSC Music 1
- Advertisement -
Share
WhatsApp
Facebook
Twitter
Linkedin
Previous articleTrends and trendsetters: 2018 in Sydney’s Indian community
Next articleIndian classical meets Australian Jazz