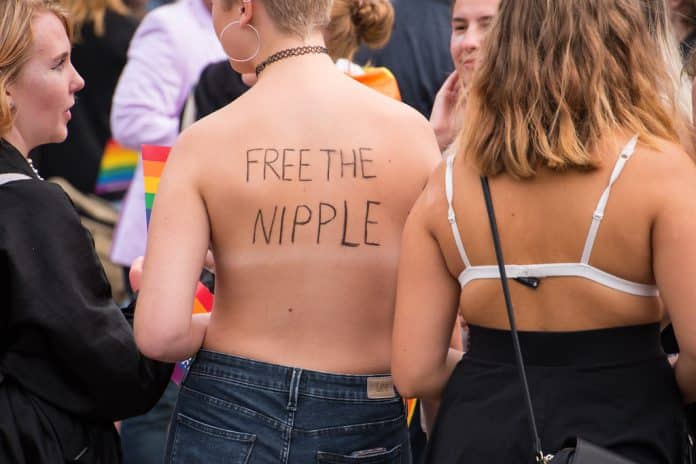 As artists across the world take to streets against the Facebook and Instagram’s unfair policies towards art-based nudity, the Indian community of artists has come out in their support, detailing their own experiences and demanding the digital platforms have a clear differentiation between vulgarity and art.
Last month, as a form of protest, nearly 100 people stripped naked holding pictures of nipples in their hands in front of Facebook’s New York headquarters, demanding to be allowed to showcase artistic nudity on the popular apps. The campaign was titled #WeTheNipple and was photographed by Stanley Tunick.


Another protest in June saw international porn artists gather outside Instagram’s Silicon Valley headquarters, describing the nudity-censorship rules of Facebook and its family of apps “vague, inconsistent and threatening to their livelihood”.
The protests have found support among international photographers, painters, models and screen artists from around the world, including in India.
“I obviously understand that Facebook and Instagram want to avoid ‘vulgar’ content on their platforms, but scrapping off art-based nudity affects artists very seriously,” said fashion photographer Soumya Iyer.
“Just like everyone else, we also want to showcase our work and build ourselves our own brand on Facebook and Instagram because of their global reach and popularity, but it’s sad that fine-art is neither accepted nor respected,” said Rohan Tulpule, a fine art photographer who has faced consequences of unfair censorship rules against his work multiple times.

Recollecting her own experiences on suffering damages, Iyer said, “My series called ‘gender of beauty’ was taken down because of the display of nipples. Instagram is such a huge platform and artists can really make use of its power of engagement! I don’t understand why the display of a woman’s nipple has become a matter of shame”.
Known for his bold photo-series like Life Through Holes and The Plus Size Of Life, Tulpule added, “Hashtags help us increase our reach but if we use hashtags like #fineart and #nudephotograph, our post comes to notice and gets deleted under ‘policy violation’. We get restricted from all activities on the platforms. The platforms have to understand that all nudity is not vulgarity”.
According to conceptual performance artist Inder Salim, “nothing is more scary than when imaginary uniform sets of rules are imposed on all to suppress all those atavistic tendencies in us.”
As part of its community guidelines, Facebook-owned Instagram says “for a variety of reasons, we don’t allow nudity” on the platform – including “photos, videos, and some digitally-created content that show sexual intercourse, genitals and close-ups of fully-nude buttocks. It also includes some photos of female nipples.”
However, the platform fails to elaborate the exact extent of “some photos” of female nipples which it discourages.

Last week, Facebook was slammed for banning Grammy-nominated British rock band Led Zeppelin’s 1973 album Houses of the Holy cover that features nude children. Later, admitting that the image was “culturally significant”, Facebook restored the image.
According to actor-model Milind Soman, who stirred major controversies after he stripped naked for a photo-shoot way back in 1995, accepted that tough social media policies that lack distinction between artistic and vulgar nudity is not favourable for artists in this digital era.
“It’s their platform, their policies and their call. What is artistic and what is vulgar on their platform is up to them to decide because after all, it is their business to be profitable (first),” said Soman.