Harris is campaigning on universal healthcare, providing government health insurance for all and large tax cuts for the middle class 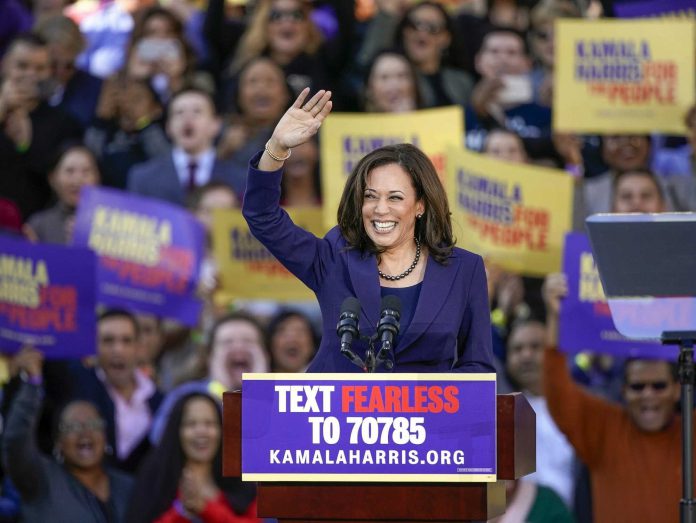 Kamala Harris, a US Senator of Indian descent, is running for President in the 2020 elections branding herself a “fighter” for the American people.

As the daughter of an Indian mother and an African-Jamaican father, she claims both heritages and chose to declare her candidacy on 21 Jan, the day that is observed as Martin Luther King Day, honouring the slain African-American civil rights leader who was inspired by Mahatma Gandhi’s message of ‘satyagraha‘.

Officially kicking off her campaign at her hometown Oakland California, she told a crowd of 20,000 of her work as a prosecutor and senator, and set those details against a broader populist vision about “running to be President of the people, by the people and for all people”, reports The New York Times.

She warned that the US and the world were at “an inflection point” in history and called on all Americans to “speak the truth about what’s happening”. Harris framed her campaign as a response to President Donald Trump, highlighting how he has divided the country and attempting to make the case that she would unite it.

During her 35-minute speech, she also discussed racism, police shootings and the impact of police brutality, The Washington Post reports.

.@KamalaHarris’s powerful response on gun violence sets the bar high. I challenge every presidential candidate to make gun safety a priority in their campaign. American voters demand it. #HarrisTownHall pic.twitter.com/QuFT7rvqWz

“The American public wants a fighter: they want someone that’s going to fight like heck for them and not fight based on self-interest and I’m prepared to do that,” she said.

I’m running to be president of the people, by the people, and for all people. I’m running to fight for an America where you only have to work one job to pay the bills and where health care and education are fundamental rights. pic.twitter.com/8wjehsmX7i

A lawyer, Harris was elected California State Attorney-General before coming to the Senate. Her role in law enforcement has drawn criticism from some in the Democratic Party and the New York Times published a scorching op-ed denouncing her as “often being on the wrong side of history” because of her tough anti-crime policies and not progressive enough on criminal justice reform.

But that could also be a plus for her, strengthening her credentials as more of a centrist who could appeal to a broader voter base while also advancing a progressive agenda. Her tough prosecutorial background was on display on the Senate the Judiciary Committee when she grilled Supreme Court Justice Brett Kavanaugh, who had been accused of sexual harassment by several women, when his nomination to the top court was under consideration. And if she were to ultimately run against Trump in 2020, she would need all toughness she can muster.

Harris is campaigning on universal healthcare, providing government health insurance for all and large tax cuts for the middle class. She is an advocate for immigrant rights and a campaigner protecting women’s rights. Her campaign said that it would not accept donations from political action committees set up by corporations to fund candidates.

Harris’ mother, Shyamala Gopalan, was a cancer researcher from Chennai and her father, Donald Harris, is a Stanford University economics professor.