It’s been ‘India week’ in Sydney

RAJNI ANAND LUTHRA is out and about across the city, attending multiple celebrations of India’s Independence Day 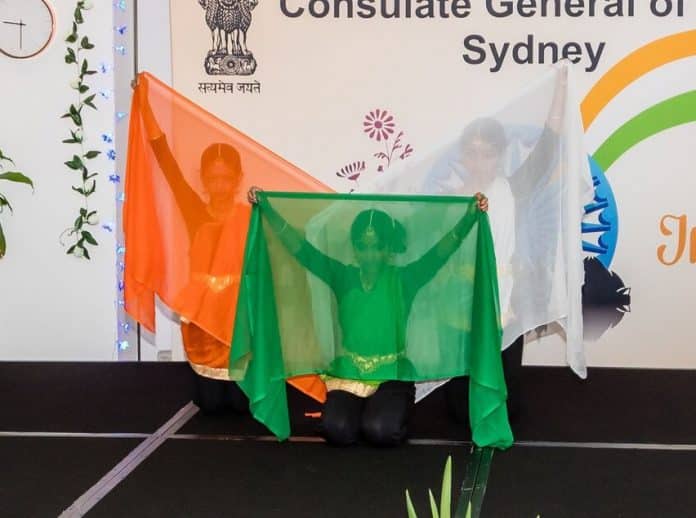 Reading Time: 5 minutesIt’s taken Sydney’s Indian community an entire week to celebrate India’s Independence Day.
We’ve had repeat celebrations by the government, by community organisations, and by the Indian government representatives here, even as messages from the Prime Minister, Federal and State ministers, and members of parliament have jammed our inboxes.
The NSW State Parliament marked the occasion for the first time, with Premier Gladys Berejiklian in attendance, and kicked off the week-long celebrations.

The actual day was of course reserved for the festivities at the Indian Consulate: the Consul General read out the message of the President of India, raised the Tiranga, and led the most vociferous rendition of the national anthem of the week.
In between these two ‘bookend’ celebrations, we went along to a variety of events.
In a wonderful new initiative this time round, Local Councils chose to mark India’s national day. The Tricolour fluttered proudly in Parramatta and Blacktown, shown due respect by mayors Andrew Wilson and Stephen Bali respectively. As areas of significant numbers of Indian-origin residents, the move was welcomed with much enthusiasm in both local areas. Kudos to Local Councillors Sameer Pandey (Parramatta) and Moninder Singh and Susai Benjamin (Blacktown).
The celebrations of our large community organisations were to a large extent the same as previous years, with repeat programs including the same main guests and speeches (as well as similar entertainment and food). While the UIA did surprise with a wonderful venue (Parramatta riverside), it did nothing for its march-past, a hallmark item in its program for years. CIA’s venue, event and format were all pretty much exactly the same as last year.
FIAN actually went down a couple of notches: a car-park venue does not exactly sound exciting when you look at the manner in which our Melbourne cousins celebrated – a landmark venue such as Federation Square, a major Bollywood star as chief guest, and the community turning up in their thousands to support – even if there is government and private sector funding to it all.
In all of these events, it was the politicians that livened up the proceedings, with their speeches, their mingling with the community, and frequently with their choice of Indian attire. Premier Gladys Berejiklian’s words were sincere as she described the outcomes from her recent India trip, as well as when she commended community volunteers for their efforts, having been there herself before rising to the position of Premier. The cricket references in Opposition Leader Luke Foley’s speeches were clever and just as entertaining as the touch of showmanship in Minister Ray Williams’ appearances. MPs Julie Owens, Jodi MacKay, Julian Leeser, Geoff Lee, Julia Finn and Michelle Rowland, all regulars at community events, continued to amaze us with their knowledge of – and engagement with – the Indian community.
By acknowledging India’s national day, they highlighted the value of the diasporic community in contemporary Australia. Here are some of our stand-out moments from this week.

Premier’s reception for Indian community The high point here must surely be the announcement that Dr. Hari Harinath will serve a second term as Chair of Multicultural NSW.

FIAN’s India Day Fair Crooner Shobha Ingleshwar’s crisp renditions of both Indian and Australian national anthems; Luke Foley’s words about “celebrating India” as well as “mourning with it” for its recent cricket performance in England; the Minister for Multiculturalism Ray Willaims’ advent on stage waving India and Australia flags.

CIA The charity auction of items in aid of Westmead Childrens’ Hospital, at which the pollies livened up the proceedings: Minister Ray Williams threw in a lunch at Parliament House hosted by him, for one of the items, and the Opposition one-upped him by throwing in a lunch for six people with four MPs. The bidding by the audience matched suitably.


Parramatta Local Council The crowds that descended on Parramatta Town Hall at Centenary Square, despite the winds: those from the Indian and local community, as well as passers-by out for an early lunch who stopped to record some of the colour and the festive sounds.

Blacktown Local Council The walking down the aisle of the Indian and Australian flags by Consul SK Verma and Mayor Stephen Bali. The two flags will fly side by side on Blacktown Village Green for a week, so grab the photo opportunity.

Indian Consulate The singing of the National Anthem here, which you’ll agree, is totally something else. Great to see the Indian Australian community drop by even if for short periods (such as one visitor Bipasha Poddar who came in for 10 minutes on her way to work). This is the place to be on 15 Aug.

Consulate dinner The swanky venue of the Calyx inside the Royal Botanic Gardens, despite its difficulty of access especially afterhours on a weeknight. The giant flower-bedecked wall added much splendour as a backdrop, and proved to be a hit with selfie hunters for that final glamorous end to a week celebrating India.
- Advertisement -
Share
WhatsApp
Facebook
Twitter
Linkedin
Previous articleIFFM masala and musings
Next articleVajpayee: A man of moderation who raised India's global stature