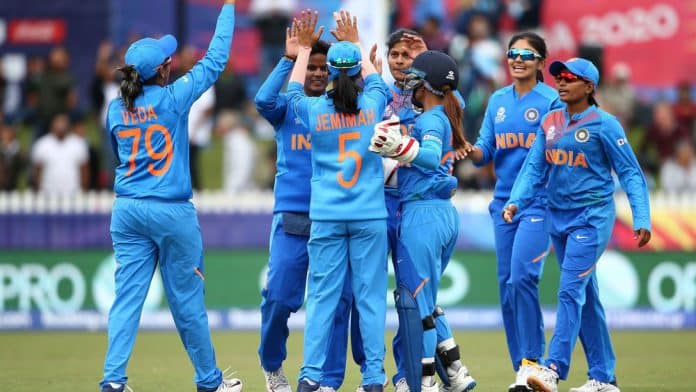 Shikha Pandey held her nerve at the last to help India become the first team into the ICC Women’s T20 World Cup 2020 semi-finals with a tense three-run victory over New Zealand.

Having held India at 133 for eight, the White Ferns would have fancied their chances in Melbourne having not failed to chase a sub-140 T20I target since October 2013.

But they were thwarted with the bat, their star-studded top-order of Sophie Devine, Rachel Priest and Suzie Bates all falling within nine overs, as Amelia’s Kerr’s stunning late cameo proved not enough to prevent defeat.

The tense Junction Oval win means India are guaranteed a spot in the last four, with the battle for the final qualifying spot in Group A hotting up.

Another impressive outing from Shafali Verma (46) set India on their way but a fine spell of bowling from New Zealand’s own teenage talent Kerr stopped her from dominating, the 19-year-old leg-spinner taking the innings-changing wicket to finish with figures of two for 21.

Smriti Mandhana, who missed the win over Bangladesh due to viral fever, saw her comeback cut short as she was dismissed for 11 by Lea Tahuhu in the third over, the opener chopping onto her stumps.

But once again Verma stepped up, the 16-year-old smashing back-to-back sixes to steer India to 49 for one in the Powerplay.

Tanya Bhatia, in at three, soon followed Verma’s lead, taking India beyond 60 but she perished for 23 when Kerr caught her at point off Rosemary Mair. The same duo combined again to dismiss Jemimah Rodrigues for ten.

Verma was twice given a lifeline as chances were squandered in the field, Maddy Green dropping an opportunity at long on before Tahuhu spilled up at mid-wicket.

Harmanpreet Kaur’s disappointing form continued as the India captain was caught and bowled by Leigh Kasperek for one – her third single-figure score in the tournament.

Hayley Jensen made amends for her side’s earlier errors by catching Verma at cover off Kerr for 46, before the spinner trapped Veda Krishnamurthy lbw for six.

Chasing 134, Priest’s time in the middle was short-lived as her aerial option backfired, Radha Yadav holding on at mid-wicket off Pandey to remove the opener for 12.

And the White Ferns’ start to the innings went from bad to worse when the Bates-Devine partnership fell after four overs, the former handing Deepti Sharma her 50th T20I wicket.

Before long Poonam Yadav struck with her spin, dismissing Devine after the skipper mistimed her full toss to point.

The fourth-wicket pair of Green (24) and Katey Martin (25) cautiously plodded on, putting on a 43-run partnership before the former was caught behind by Bhatia off Rajeshwari Gayakwad.

Two overs later and Martin was gone, Rodrigues with the catch on the mid-wicket boundary off Radha Yadav.

That looked to be game done and dusted but Kerr (34) defied Poonam’s heroics to set up a nerve-wracking finale, striking 18 in the penultimate over.

But she couldn’t muster a final-ball six as the White Ferns agonisingly missed out, suffering their first defeat of this Women’s T20 World Cup.