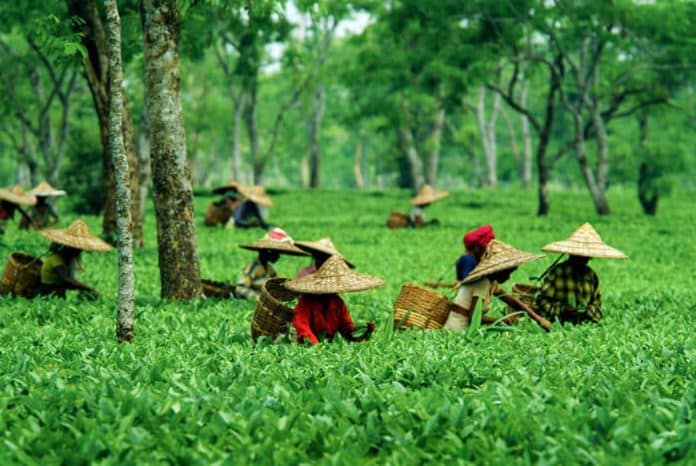 Over 850 big tea gardens and thousands of small gardens in the northeastern region of India specially in Assam are closed leading to huge economic loss and jeopardizing the livelihood of lakhs of workers.

Tea planters, however, promised to take care of the welfare of over seven lakh workers and employees.

The Tea Board, under the Union Ministry of Commerce and Industry, in an advisory said that the tea gardens and small growers who may face disruptions in activities and who could not pluck quality green leaf on time are advised to skip and discard those overgrown leaves and pluck and manufacture only the subsequent growth.

“These advisories have been issued in order to uphold the quality of Indian tea in the face of outbreak of COVID-19 pandemic,” the Tea Board said on Tuesday.

North Eastern Tea Association (NETA) adviser Bidyananda Barkakoty said that the tea estates in Assam have already shut down and they are in touch with the Assam government about the livelihood and welfare of the workers.

“The closure of the works in the tea gardens was decided after the Consultative Committee of Plantation Associations (an umbrella body of tea producers associations), held a video conference meeting earlier this week,” Barkakoty told media.

He said that the lockdown is inevitable as per the government’s directives and to prevent the spread of the COVID-19.

“The tea estate owners and management are trying their best to provide wages and rations to the workers. We could make up our loss if we are alive. Job security of our workers and employees are also very supreme in this hour of crisis,” the NETA adviser said.

Tea garden owners, economists and others predict huge losses due to the closure of the tea estates and related trades in the economically feeble northeastern region.

Plucking had just picked up in the gardens in Assam, which is the largest producer of tea in the world. According to the tea planters, leaves plucked during the initial flush are the youngest and the tender part of the tea plant. The first flush from March to April is the first plucking after the dormant winter months.

The Assam unit of the Indian Tea Association (ITA) has requested the Labour Commissioner to allow the industry to undertake spraying and irrigation operations as there may be huge and permanent damage to the tea plants if adequate protection (through spraying of pest repellents and pest killers) is not allowed.

“Considering the scanty rainfall in the current season, it is also required to continue irrigation in tea gardens as necessary,” the ITA said.

Of the total domestic tea production of 1,325.05 million kg last year, 720 million kg came from Assam, which on an average produces 52 per cent of India’s total tea.

Assam has 765 big tea gardens and over 1.20 lakh small tea growers engaging around 6.77 lakh workers in this organised industry.

After Assam, Tripura is the second largest producer of tea in the northeastern region producing around 10 million kg of tea annually.

Tripura Tea Development Corporation (TTDC) Chairman Santosh Saha said that all the 54 big tea gardens and thousands of small tea gardens besides 22 processing factories are now closed to maintain social distancing in view of the outbreak of novel coronavirus.

“The state government has taken some steps to maintain the supply of rations, packed foods and providing financial aid to the poor people and daily wagers,” Saha told media fearing a huge economic loss due to the closure of the tea gardens in the northeastern region.

The TTDC chief said that after Assam, Tripura is the second largest tea producing state in the northeast, producing different quality of tea with an area of 6,885 hectares under tea cultivation.

About 20,000 people are directly employed in the 54 big gardens in Tripura, with another 15,000 people involved in 230 small gardens contributing immensely to the growth of the state’s overall economy.