After Modi-Trump meet, Pak isolation on Kashmir is complete 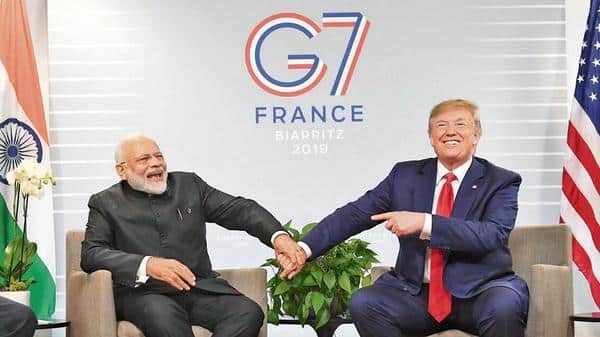 With US President Donald Trump backing off from his offer to mediate, which Islamabad had been eagerly clinging on to, and with the other global leaders too unwilling to back it, including those from the Muslim world, Pakistan’s isolation on the international arena on Kashmir appears complete.
As Prime Minister Narendra Modi on Monday firmly conveyed to President Donald Trump that it does not welcome a third party mediation on Kashmir, Pakistan Prime Minister Imran Khan turned belligerent.
In a special address to the nation, timed as the Modi-Trump talks were slated, and perhaps sensing the way the talks in Biarritz, France, would go, Imran Khan said that Islamabad’s Kashmir policy was at a “decisive” point and slammed India for playing what he called “its last card” and vowed to “take the next step”.
Khan said he will raise the Kashmir issue at every international forum, including at the UN General Assembly.
He assured the people of Pakistan that his government will stand by the Kashmiris till India lifts the restrictions in the Valley.
Khan also said that though Islamic nations are silent on Kashmir, they would have to speak up at some time.
For Pakistan, the Muslim world’s backing of India, with the UAE and Bahrain, two important members of the Gulf Cooperation Council, welcoming with open arms the visit of Prime Minister Modi to their countries this week, has come as a bitter pill — a reminder that India with its stable economy and forward looking policies is a favoured nation.
The UAE’s conferment of the Order of Zayed, the Gulf nation’s highest civilian honour, on PM Modi has added to the sense of bewilderment in Islamabad, that Islam cannot be considered the sole binding force anymore, and that countries are looking beyond the confines of religion to the an open, inclusive, progressive world order.
“I read in newspapers that people are disappointed that Muslim countries are not siding with Kashmir. I want to tell you not to be disappointed; if some countries are not raising this issue because of their economic interests, they will eventually take it up. They will have to, with time,” Imran said.
In an effort to claim some modicum of victory, after going on a diplomatic overdrive to raise the Kashmir issue with almost every major world leader, Imran said that Pakistan had succeeded in internationalizing the Kashmir issue.
“We have succeeded in internationalizing the issue of Kashmir, we talked to world leaders and embassies. The UN for the first time since 1965, convened a meeting on Kashmir issue. Even international media has picked it up,” he said. But he forgot to mention that the UN Security Council held a closed-door meeting, on China’s insistence, in which it endorsed India’s moves on Kashmir, and its development agenda after revoking its special status. Only good friend China was the sole country that spoke against India at the Permanent five meet.
Even Imran Khan’s regular tweets on Kashmir and his labeling of Modi as a “Fascist, racist, Hindu supremacist” leader have failed to get him the international traction he has wanted.
While Imran says he will raise the Kashmir issue at the UN General Assembly summit in September, Prime Minister Modi has already met UN Secretary Antonio Guterres on Sunday, on the sidelines of the G7 summit , and held “fruitful discussions” with him. A photo of a smiling Guterres and Modi shaking hands after the meeting was tweeted by the PMO on Sunday night.
“PM @narendramodi met @UN Secretary General Mr Antonio Guterres on the sidelines of the @G7 Summit. The two leaders had fruitful discussions on a wide range of subjects,” the PMO tweeted.
The successful meeting between Modi and the UN chief came after Pakistan Foreign Minister Shah Mahmood Qureshi called up Guterres to apprise him about the “evolving and delicate situation” in Jammu and Kashmir. Qureshi said it was the responsibility of the international community to play a role in addressing the Kashmir situation.
Answering queries from the media on Kashmir, ahead of their bilateral meeting, Prime Minister Modi, to a question on Trump’s offer to mediate on Kashmir, said: “All issues between India and Pakistan are bilateral, and we don’t want to trouble any nation over this. And I have faith… before 1947 we were one nation, and that if we sit together and discuss, we can find solutions between ourselves to our problems through dialogue.”
Earlier, asked if Kashmir would be discussed, Trump said he had discussed the issue with Modi. “Well, we spoke last night about Kashmir, and Prime Minister Modi really feels that he has it under control; and now when they speak with Pakistan and I’m sure that they will be able to do something that will be very good.” Trump’s remark that both India and Pakistan “can do it by themselves”, is a climb-down from his earlier stand, as recent as August 21 when he said he would discuss the Kashmir issue with ‘friend’ Modi in Biarritz and do his best to mediate in the issue.
Significantly, when PM Modi was asked about Kashmir at the media briefing at Biarritz, France, alongside Trump, he said: “India and Pakistan have several bilateral issues. And after the election of Prime Minister Imran Khan, I told him that both our countries suffer from the problems of poverty, illiteracy, backwardness and both should work together for the betterment of our people. This message I gave to the Pakistan Prime Minister, and I have conveyed this to President Trump as well, as we keep discussing our bilateral issues.”
Trump’s backing off is an iteration of the US’ official stand that Kashmir is a bilateral issue between India and Pakistan.
IANS