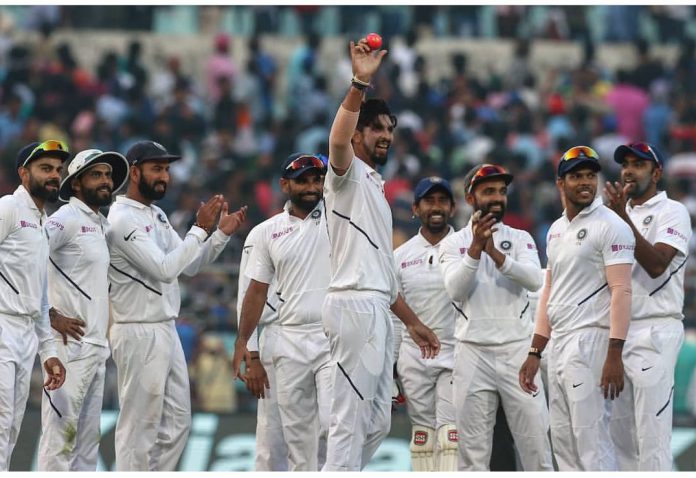 Virat Kohli and his quick bowling trio trampled Bangladesh by an innings and 46 runs to clean sweep the series 2-0 in their maiden pink ball Test at the iconic Eden Gardens.

This was India 12th consecutive home series victory as they also became the first team ever to complete four successive innings victories in the five-day format. India had won the first rubber by an innings and 130 runs.

After India declared their first innings on 347/9 on Saturday, Bangladesh slumped to 14/3 by the seventh over and risked losing the match inside two days.

But Mushfiqur Rahim and Mahmudullah, who made 39 before a hamstring injury forced him to retire hurt, forced a third day’s play as they went into stumps at 152/6.

It then took India less than an hour to wrap up proceedings as Mushfiqur top-scored with a fighting 76 before holing out to Ravindra Jadeja at covers off Umesh Yadav who returned figures of 5/53. All other batters fell around him as Mahmudullah could not come out to bat.

Ishant Sharma, who claimed 5/22 in the first innings, was the wrecker-in-chief in the second as well, returning 4/56 with an impeccable display of seam bowling.

Bangladesh were shot out for 106 in the first innings and trailed their hosts by 89 runs. They resumed the third day at 152/6, still trailing by 89 runs. Ebadat Hossain walked out to bat with Mushfiqur but it took Umesh little time to have him caught by Kohli at slips.

Rahim was next to go as he tried to be aggressive and up the ante. Al-Amin Hossain was the last to go as he was caught behind by Wriddhiman Saha off Umesh.

Earlier, Kohli slammed a magnificent 136 and added 99 runs with his deputy Ajinkya Rahane who fell for a fluent 51. On Day 1, Cheteshwar Pujara also struck a similar 55.

The India captain cover-drove Ebadot Hossain to reach 99 and, with the crowd chanting his name, took two off spinner Taijul Islam to bring up his 27th test century, and 20th as captain.

Praising the pace trio of Ishant Sharma, Umesh Yadav and Mohammed Shami, noted commentator Harsha Bhogle tweeted statistics to point out that Indian fast bowlers have been more successful than the spinners in recent times, garnering 239 retweets and 3K likes.

On his Twitter handle @bhogleharsha, Bhogle wrote: “Four years ago, against South Africa, India’s spinners took 61 wickets to 9 for the quicks. In this series, spin got but 5 (none in this Test) vs 33 to pace. The times, they are a changin’!”

In reply, a fan remarked: “This really shows how good our pace attack is. Really looking forward to the tour of New Zealand and Australia. With @Jaspritbumrah93 back, our pacers are gonna give one hella challenge to them.”

Another wrote: “@imVkohli has a big role in this. The day he became Test captain he has been promoting “real” fast bowlers like Umesh, Shami, Aron, Ishant, Bumrah and most recently Saini. Dhoni on the other hand preferred control over pace and attacked mostly with spin.”

A Twittter user asked: “Has India ever before in India won a Test match with the pacers taking all wickets and spinners taking no wicket?”

A fan observed: “Yes, and Ishant’s (Sharma’s) length is a revelation.”

Another user posted: “Have to thank Bangladesh for this stat, surely India won’t be producing such tracks against Eng, NZ and Aus.”

One user had a funny take on the issue, saying: “Aggression going up in the country? Also in politics!!”

“It also shows how the pitches have changed dramatically!” one cricket fan posted.

The talismanic batsman, who now has back-to-back tons at Eden Gardens with the last coming against Sri Lanka in 2017, took 159 balls to get to his century.

Kohli shifted gears after getting to his hundred and hit Abu Jayed for four consecutive fours before Ebadat removed him with Taijul moving from deep square leg and hurling himself into the air to take a stunning catch.

Kohli hit 18 fours in his 194-ball vigil, which was more than the entire Bangladesh team who had folded in 30.3 overs in their first essay.

Kohli revealed how Sachin Tendulkar told him to treat the much-talked about twilight period in pink ball Tests as the challenging morning session of a traditional red ball five-day match.

Bangladesh have had to call two concussion substitutes after Liton Das and Nayeem Hasan sustained nasty blows to the helmet in the first innings and Mohammad Mithun also took a knock due to visibility being an issue under lights. Mushfiqur too was hit on the helmet.

Some of the Indian players who were involved in the match have since expressed their thoughts about pink ball test and happiness on Twitter.

Vice captain Ajinkya Rahane said: “Privileged to be a part of the #PinkBallTest, was a great experience to play the game in front of a packed Eden Gardens crowd.
Thank you @BCCI & CAB for promoting the D/N Test in India. And a big cheers to our pace bowling trio who took all the wickets in this game. #INDvBAN (sic.)”

Ishant Sharma was the man of the match for his extraordinary performance in both innings. He took five wickets in the first innings and four in the second. He quoted Scottish American industrialist and philanthropist Andrew Carnegie, saying, “”Teamwork is the ability to work together toward a common vision” First pink ball test victory ! Well done boys. “

Wriddhiman Saha was once again impressive behind the stumps, expertly keeping the track of the wildly swerving pink ball under the lights. “Congratulations Team! It was an amazing experience to play this special Test match & to see the number of ppl who turned up, even on the 3rd day. Congratulations to @imVkohli for being the first captain in history to win 4 Consecutive Games by an innings. #IndVsBan @bcci (sic.),” he said.

Mayank Agarwal scored a double hundred in the first Test but couldn’t make a big impact on the scorecard in the second. “And it’s another series win! Honoured to have been a part of this historic game. Well done boys!” he tweeted.

Read also: Up close and personal with the King