In tune with health 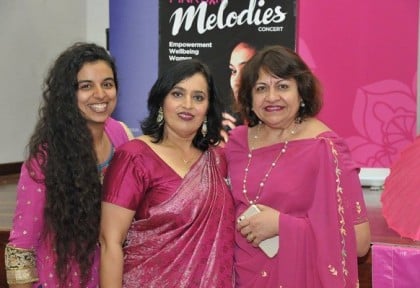 
Reaching out to linguistically diverse communities, the campaign was led by the NSW Multicultural Health Communication Service (MHCS) in partnership with the NSW Refugee Health Service, University of Technology Sydney and BreastScreen NSW with funding from the Cancer Institute NSW.
There were live performances by nine finalists – Anu Sitaram, Daniel Vijayakumar, Deepa Srinivasan, Gary Luck, Priyanka Pinto, Rekha Shashikanth, Russell Vincent, Sheyana Wijesingha and Sumathi Krishnan.
Digital stories of breast cancer survivors from Indian and Sri Lankan backgrounds, who have shared their journeys to raise awareness about breast screening within their communities, were also screened.

The Pink Sari Project National Songwriting competition was developed by MHCS as an innovative and exciting way to promote the core message of early detection and intervention through the power of music.
“The Pink Sari Project is not just about breast cancer awareness that is culturally relevant, it is about the power of South Asian women and their communities; what we can do if we join forces and work as a team towards a common goal,” President of Pink Sari Inc, Meenakshi Chopra said proudly. “We have finally broken the culture of silence. We have broken the culture of shame.”

Open to amateurs and professionals from across Australia, the theme for the competition was ‘The women in my life’ with words ‘pink sari’ woven in the compositions. The contest also included a songwriting workshop at the Australian Institute of Music (AIM) to help aspiring songwriters to craft their compositions.
“The competition was a creative way of engaging the community to promote key messages about the importance of breast screening in the Indian and Sri Lankan communities. It is also a great way for songwriters and musicians to have more exposure of their music, and as well as be involved in the project to encouraging women in their lives and in the community to get regular mammograms,” Chopra said.

“We encouraged musical artists to use their talent for composing inspiring melodies and lyrics to help raise awareness about the importance for breast screening for all women from all culturally and linguistically diverse backgrounds and spread the messages that could save the lives of our loved ones.”
For Canberra-based songwriter Russell Vincent, whose composition ‘Women with our hearts’ won the top gong, the competition was a chance to write a song that may yet save lives. Having been touched by the dreaded disease, his powerful recurring message is that cancer does not discriminate.

Rekha Shashikanth’s Kannada melody ‘O Sumana’ came a close second, while Anu Sitaram’s ‘Naari’, featuring well-known Sydney artist Pushpa Jagdish, won the audience award. The third prize was jointly shared by Melbourne-based singer/songwriter Gary Luck for ‘Pink Sari Women’ and Anu Sitaram.
The compositions of nine finalists were professionally recorded and distributed at the event.
“A highlight of our journey is that we have finally broken the culture of silence and shame that has previously been associated with breast cancer,” Chopra said.  “We owe a deep debt of gratitude to the cancer survivors for sharing their stories. They have been an inspiration to the Pink Sari team and the driving force behind all this work.”