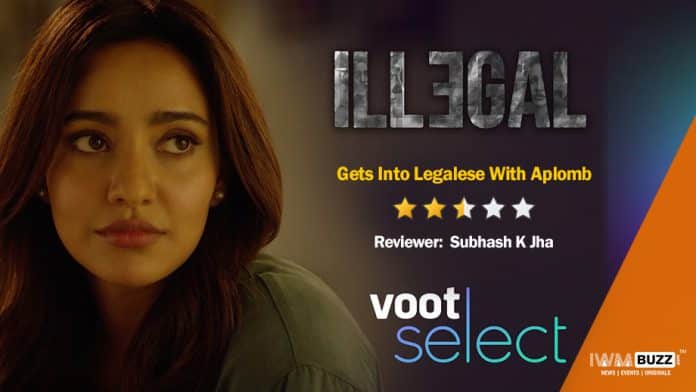 A sketchy script and unsure direction can often mar an interesting premise, which is what happens to “Illegal”. Still, while it’s not exactly “Suits”, the series is an interesting tweak to trademark filmi legal drama, patented by decades of Bollywood-sponsored courtroom cliches.

At the core of the plot is Niharika Singh (Neha Sharma), a naive, rookie lawyer. Top legal eagle Janardan Jaitley, or JJ (Piyush Mishra), hires the young Niharika in his firm. Initially, JJ tells her to fight for a woman named Mehr (Kubbra Sait), who has murdered four people in her family. Imminent death penalty in a case involving a woman naturally interests the idealist Niharika. Soon, however, JJ wants her to represent a rape accused. She begins to see the world of courts and cases for what they are worth.

“Illegal” expectedly highlights morality and immorality, right and wrong, but does not dwell upon these things overtly — which is a good thing. The approach stays authentic, with the treatment never veering to high-pitched verbal courtroom duels in order to arrest audience attention. The dialogues, including the lawyers’ exchanges, are kept real, and the protagonists mouthing them are wholly believable. As a mainstream entertainer, the narrative supplies at least one significant turn of events in each episode, to keep you hooked.

Yet, it does not take you long to realise that the trouble here is not a lack of intent or imagination. “Illegal” falters in execution.

The show needed sharper storytelling. The writing (Reshu Nath) is the biggest letdown. Despite setting up engaging characters and situations, the overall storyline remains bound by cliches. Sahir Raza’s direction never really manages to overcome that flaw. There is a romantic subtext, perhaps to render an emotional twist to the tale. It distracts more than it delights.

Piyush Mishra is rock solid as ever, rising above the show to hold your interest. He lends subtle nuances to JJ, a character with shades. Neha Sharma does adequately, though she seriously needs to check the occasional tendency to ham. Satyadeep Mishra, as the rape victim’s lawyer, is impressive. Kubbra Sait adds unsettling authenticity to her role of a death row inmate who continues to be abused in prison.

Overall, “Illegal” draws interest thanks to its cast and concept. We would like a second season, of course — this could really emerge as our desi “Suits”. But next time, a little more attention towards script and direction would be apt.