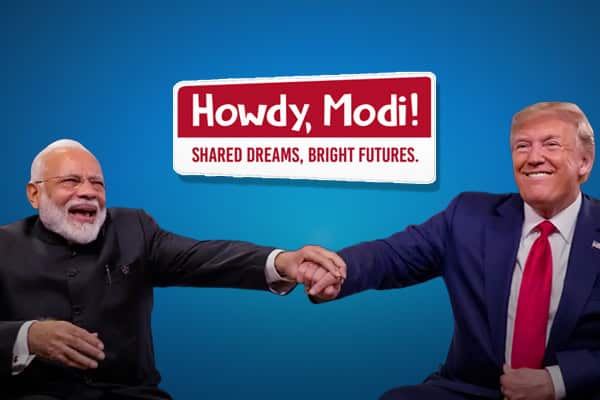 What a coup for all concerned, to have a double act of Indian PM Modi and US President Trump on the main stage at an upcoming function in Texas.
PM Narendra Modi is known for his rock-star status among sections of the Indian diaspora. He has used this prowess to the fullest on his international travels, engaging with the Indian diaspora like perhaps no other prime minister has before, to discuss his views on a number of subjects.
Shortly after coming to power in 2014, he addressed the Indian diaspora in Madison Square Gardens in New York. 19,000 flag-waving Indian Americans cheered him on as he promised to work for India’s development. The same sentiment continued when he spoke at the Allphones Arena in Sydney in 2014 in front of 16,000 supporters. To this day, the Aussie politicians who attended speak with awe about the sheer energy of the mammoth crowd that had gathered there. In 2015, in the Silicon Valley, every seat in the 18,000 sports arena was filled as Modi spoke about his new Digital India campaign.
Modi has also addressed gatherings of the Indian diaspora in the UK, in Paris and in Kobe (Japan), among other parts of the world.
The reality is that PM Modi has latched on to the concepts of both diaspora polling and diaspora diplomacy.
Diaspora polling is a term that refers to having non-resident Indians actually calling their friends and family around election time and extolling the global importance of BJP and Modi.
Diaspora diplomacy on the other hand is an ongoing endeavor to protect the interests of India. Much like the Jewish diaspora that looks after the interests of Israel around the world, there is a case to be made to have the 30 million Indian diaspora become India’s voice and add on to India’s diplomatic presence globally.
In United States, the 2.4 million Indian Americans are increasingly finding their political voice. On the one hand we have the United States India Political Action Committee which
is not aligned to either of the two major political parties; on the other, there are other platforms such as the Republican Hindu Coalition which are proud to show their colours. The political engagement and activism is well and truly on the increase. And so, it is but logical that the mega success of overseas rallies which PM Modi and his international followers stage, will be of interest to local politicians.
President Trump is set to share the stage with PM Modi at the ‘Howdy, Modi’ function in Texas, US. With over 50,000 Indian Americans registered to attend the event in Houston, one suspects that President Trump is keen to show his friendship with India’s strong man, not only to India but also to the Indian American community, given that the US Presidential elections are coming up in 12 months’ time. With Trump’s 64 million Twitter followers and Modi’s 50 million, be ready for a tweet bromance.
Prime Minister Modi is due for a visit to Australia soon and one can envisage a ‘G’Day Modi’ celebration in Australia, with Prime Minister Morrison sharing stage space with him, of course.
As ScoMo will no doubt say, how good is that!