How Bollywood is doing its part against COVID-19

After shutting down film shoots in support of social distancing, Bollywood stars are now pledging funds to combat the coronavirus pandemic 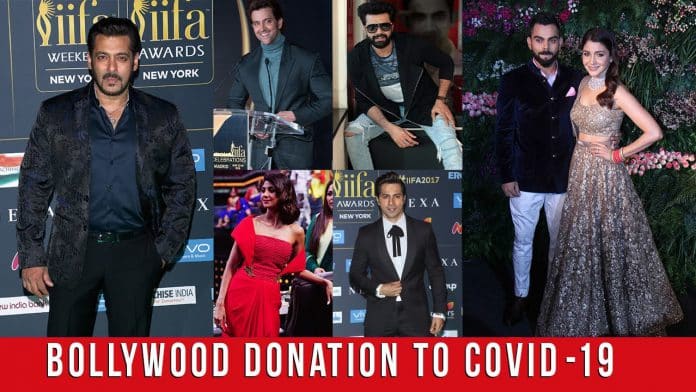 With corporations and businessmen making large contributions to the Prime Minister’s Citizen Assistance and Relief in Emergency Situations (PM CARES) Fund, Bollywood wasn’t going to fall behind. Here are some of the big names who have publicly announced the ways in which they are doing their part to fight the pandemic.

Rajnikanth One of the first celebrities to come forward, the Tamil superstar had donated Rs 50 lakh towards helping daily wage workers.

Salman Khan The president of the Federation of Western Indian Cine Employees revealed that Salman Khan’s Being Human Foundation will financially support 25,000 daily wage workers in the film industry.

Akshay Kumar The action star has announced that he will contribute Rs 25 crore to the PM CARES Fund.

Hrithik Roshan Demonstrating collaboration with the Maharashtra government, Hrithik has announced that he was purchasing N95 and FFP3 masks for BMC workers and other caretakers in the state.

Lata Mangeshkar The legendary singer announced a donation to the Chief Minister’s Assistance Fund in Maharashtra, contributing Rs 25 lakh to help the government.

Priyanka Chopra Jonas and Nick Jonas The Sky Is Pink actress and her singer husband have donated to 10 charities fighting the pandemic like the PM CARES Fund, Goonj, Doctors Without Borders, and UNICEF. They, too, have not disclosed exact amounts.

Sabyasachi Mukherjee The acclaimed designer donated Rs 1 crore to the Prime Minister’s National Relief Fund (PMNRF). In addition to this, he has promised Rs 50 lakh to the Chief Minister’s Relief Fund in his home state of West Bengal.

Other big names in Bollywood that have done their part to combat the pandemic by contributing to the PM CARES Fund include comedian Kapil Sharma who has donated Rs 50 lakh to the PM CARES Fund; Varun Dhawan who has pledged Rs 30 lakh; Kartik Aaryan Rs 1 crore; Shilpa Shetty and her industrialist husband Raj Kundra Rs 21 lakh; and singer Guru Randhawa Rs 20 lakh.