Himalaya through their eyes 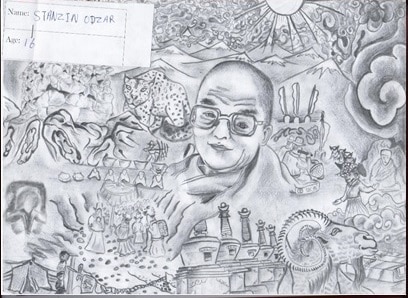 A bit of Ladakh came to Sydney last week. This was the Ladakh of expansive mountains; and of intimate, everyday moments of its hardy people. This was the Ladakh of the Buddha; and of the snow leopard. This was Ladakh as most people haven’t seen: through the eyes of 23 students who live there.
These children, who study at the famous Druk Padma Karpo School (Druk White Lotus School), made drawings and paintings depicting their own private version of Ladakh. The works were displayed at the Union Bank of India’s Sydney office in an art exhibition aptly titled The Indian Himalayas: Through My Eyes on 17 October. The exhibition was an initiative of Aei4eia, a company focusing on sustainability matters and was supported by India Tourism, Sydney.

The exhibition was a part of ‘People, Economy, Art, Culture & Environment (PEACE) of the Indian Himalayan Region,’ an effort by Aei4eia to conserve this global heritage.
While the artists themselves were not present at the exhibition, their paintings were proudly displayed in the Union Bank office.
The first prize went to 16-year-old Stanzin Odzar’s highly detailed black-and-white work showing a composite of several aspects of the mountainous region – the Dalai Lama, the snow leopard, the ibex, the harsh sun, snow-capped mountains, stupas, prayer flags, mask dance monks, shepherds, soldiers, road workers, farmers and more.

Jigmat Phunchik’s painting – which won the second prize – depicted a lens through which could be seen various elements such as a monastery, a traditional Ladakhi home, migratory birds and people in traditional attire. The work also incorporated motifs from Buddhist art.
Padma Dorjey’s third-prize winning effort showed a pristine lake, a rising – or setting – sun, mountains and monasteries. Tsering Dolkar’s simple drawing got a special mention for her depiction of a river, snow-capped mountains, farming and daily activity.
Most drawings also incorporated the image of His Holiness The Gyalwang Drukpa, founder of the school.

A brief presentation, conducted by Aei4eia director Jayantee Mukherjee Saha, preceded the judging of the art work.
Saha also screened a short documentary about the Druk Padma Karpo School, which shot into limelight after being featured generously in the Bollywood hit 3 Idiots.
Located at Shey near Leh in the Ladakh region, the school is one of the remotest schools in the world yet one of the most scientifically advanced. “Interestingly, it has been designed by the same firm that brought the design of Sydney Opera House to life,” Saha said.

The documentary went on to say how the school balances modern teaching with ancient traditions and how the school building and the design firm have won numerous international awards for sustainability and architecture.
There are more than 380 first-generation learners of the nomadic tribe called Changpas in the school. “We are not wildly and wantonly competitive,” the school principal Stanzin Kunzang says in the documentary. “We want our children to be compassionate human beings. We want our children to competitive, smart and outgoing, but not at the cost of being robots or heartless people.”

Philip Ruddock, former Minister for Immigration and Multicultural Affairs, Former Attorney General of Australia, Mayor of Hornsby Shire Council and the second longest-serving parliamentarian, was the chief guest at the event. He came away impressed by the school and the students’ art work. “The students have shown us their world through their eyes,” he said.
Consul General of India in Sydney, B Vanlalvawna said he felt a special connection with the art as it involved Himalayas which also extended to his home state Mizoram. “The fact that the art work is being displayed thousands of miles away in Sydney will no doubt be a huge encouragement for the kids,” he added.

Union Bank of India’s Sydney branch CEO Pankaj Kumar also praised the efforts of Aei4eia as well as those of the students. Saha also announced that the bank was giving a donation to the school and had also sponsored prizes for the students.